A Saturday Spent Mostly Outside. Plus, A Beautiful Video 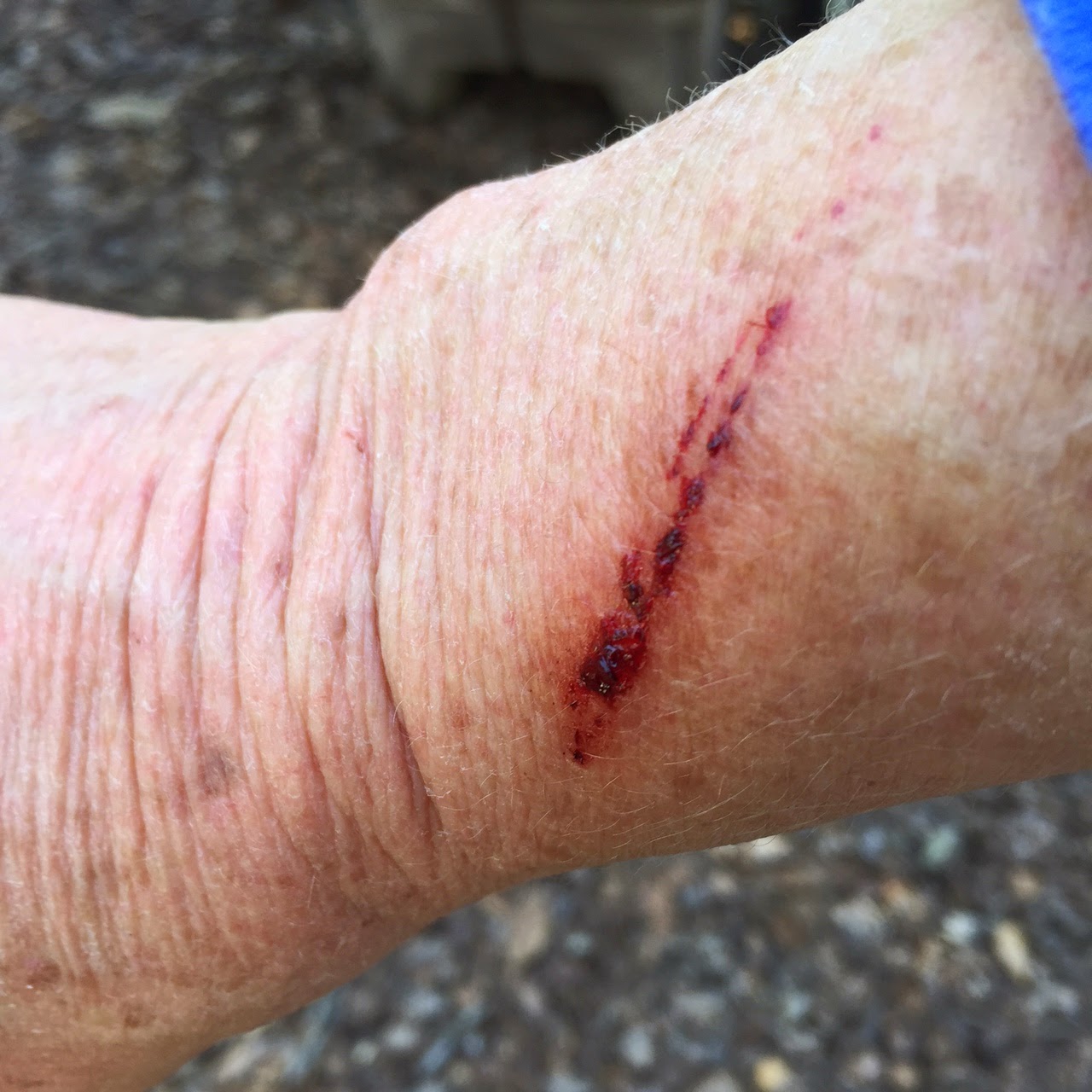 And that's my good wrist, oh ye people of young years. I sent that picture to a friend with the accompanying text, "I am doing yard work and self-flagellating at the same time. Multi-tasking."

For some reason I thought it would be a good idea to just get into the dense places in the yard and do away with a few thorn vines, a few invasives. I'd read an article in the paper on Friday about an invasive called Ardesia Crenata and looking at the picture I said, "Oh. Well. So that's what that plant is."
It's all over my yard.
It's a very pretty plant and was exported from Japan and Northern India as an ornamental. It does have a medicinal use which is that if you get bit by a cobra, chewing on the root can help. We don't have many cobras here.
So anyway, I got out there and started yanking up that crap and then I got distracted by thorn vines and that's where I got my wound. I don't really care to clean out all of the yard's border areas because they are safe havens for birds both wild and domestic. But still...a little tidying seemed in order.
I soon grew weary of this impossible (for me) task and moved on to trimming roses. I have no idea if this is the proper time of year to trim roses nor do I know how to properly trim roses but fuck it- I have clippers and gloves and so I did my best. They always seem to survive and they don't get enough light anyway so it doesn't really matter.
I also trimmed up some sago palms which have needle-like fronds which, when they pierce my old skin, cause an allergic reaction.

No. Really. I just loved being outside and feel the better for it.

And now it's Saturday night so you know what that means. Yep. My beloved Garrison Keillor.

I went out a little while ago and picked a nice bunch of salad greens and actually pulled a few carrots. CARROTS! The first time I've ever had any success with them. They are still very much baby carrots but golly, they're pretty.
And Maurice nibbled on the tops which I have saved in a baggie in the refrigerator for soup. 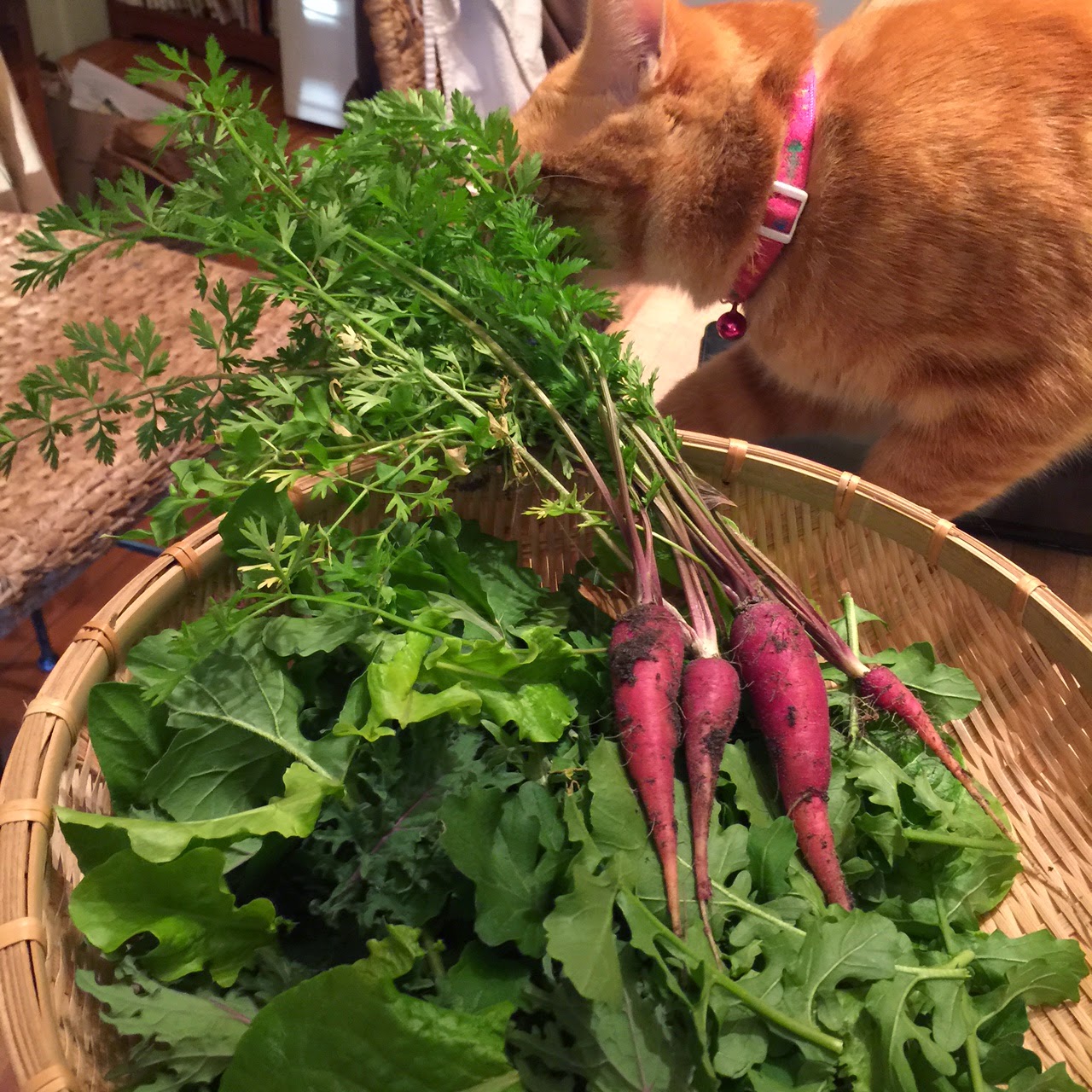 I love the winter garden so much. You can have cooked greens or raw and they're better than anything you're going to buy at the store. I wash my greens in a sink full of water and then put them on a towel and wrap them lovingly and put them into the refrigerator for them to crisp all up and I'll make salad in a little while. The best salad. Ever.

And tomorrow morning Jessie and Vergil are coming out for pancakes and bacon and then Jessie is going to sleep in our bed because she's working all night tonight. If there is anything more precious to a mother than feeding her grown-up child and then tucking her into bed I don't know what it is. Hell, I'll even read her a story if she wants.

Mr. Moon is sitting in his chair, relaxing a little bit because he worked hard all day. Bug came over and between the two of them, they took a fender off a car.
Surgery on Monday, taking a car apart on Saturday.
It's sort of a drag having such a workhorse of a husband. It makes me feel guilty if I malinger. Which I've been known to do.

Anyway, yes, it's been a good day and being outside worked a charm and Bug posted the video he made of pictures of Kathleen for the service and I'm going to share it here. Watch some  of it. See how gorgeous she was. Notice how, in almost every picture she is holding on to someone with such love. Mostly Bug.
I still can't believe she's gone but in a way, she never will be. If it's true that as long as there is someone who keeps you in their heart after you are gone, she will be here for a long, long time.


As long as I'm around and that's for sure.

Celebrate it while you can, people.