He's A Tough One, That Man

Ah. We are home and have been so for several hours.
The surgery went well and quickly, too, once it got started. They have these monitors in the surgical waiting room now and you get a patient number and you can look and see if they are still in surgical holding or in the OR or if surgery has started or finished and then when they are taken to Recovery.
All very modern and convenient and the coffee in there still tastes like burnt shit.

God, I hate that room. Some people seem to think it's Party Time! when a loved one is undergoing the knife or a procedure. One family had a clan there as well as a pastor who was wearing one of the worst rugs I'd ever seen. In my life. Oh dear. Well. I ended up knowing about the daddy of the family across from me who was getting an MRI and he was dying of a brain tumor and they'd lived on a toxic waste dump site for years but no one told them and now everyone who lived there is getting horrible diseases. They are going to sue. I sure as fuck don't blame them.

I ran into a woman I've vaguely known for about thirty years or more whose daughter is probably brain dead from things I don't feel comfortable going into but she was drinking coffee, the woman I vaguely know, and saying, "But I'm the mother! I don't give up! Miracles do happen! I'm not going to put her down like a dog! I don't even put my dogs down!"
Oh god. Broke my heart. And what do you say? She won't even go home to take a shower and has been at the hospital since last Saturday. I hugged her and told her I'd be thinking of her. She asked me to pray for her daughter and I didn't know what to say so I just hugged her again, my eyes filled with tears.

And there were at least two more stories I heard, neither of these as awful but still, enough to make me so fucking grateful that I was there for the reason I was and not one of these horrible, dire situations.

The nurse who admitted Mr. Moon at six a.m. was a bit too perky. She came extremely close to what I would call, "Slappable."
But she was trying and she did a fine job and of course everyone on the floor had to ask my husband how tall he was and WHERE DID HE GET HIS SHOES? OH MY GOD! I'VE NEVER SEEN SHOES THAT BIG! and so forth. A little much at six a.m.

Various of my kids offered to come and sit with me but that damn surgical waiting room was crowded enough and I just sat there by myself, not really nervous anyway, just becoming sadder and more annoyed by all the people and some of them were actually laughing and well, that's all right. I don't know. I was tired.

Eventually, the doctor came out and told me how everything had gone, ("He did real well. He behaved himself the the whole time." Hahahaha!) which was fine and they've put him all back together again. He gave me some post-op instructions and advice and said that he'd probably be in Recovery for an hour and then I called Jessie and she jumped on her bike and came and met me. By the time we got back up to the room where he was going to be after he got out of Recovery, he was already there, looking good. The nurses became concerned about his heart rate which was, to put it mildly, extremely low. Slow. Whatever. But his Oxygen saturation was 99% and when he got up to go use the bathroom he didn't feel faint or woozy or dizzy and his color was good. Still, though, after three different nurses and/or techs took his pulse, they decided an EKG was in order.
This did not sit well with my husband.
"I'm fine!" he said. "I just have a low heart rate." And he does.
They kept asking him if he was a jogger or a runner.
By the time the EKG guy got to the room with his little machine, Jessie had informed her daddy that he could refuse it if he wanted to. And so he did. And then his heart rate came up nicely and we got to leave.

We stopped by Publix and I got his pain med prescription filled and then we came home and I tucked him in bed with tea and ginger ale and the ice bag and the remote and he's been there ever since. Well, except for getting up a few times and once going outside to fill his bird feeders.
The doctor said that walking was the best thing he could do. And so he shall walk. We're about to take a walk around the yard. A sunset walk.

I am so damn grateful that this is behind us. I was never really worried but hey- surgery.

So we had our walk around our little manor, looking at coming buds and the trillium which is already sprung forth and the chickens and the ducks and the trees. 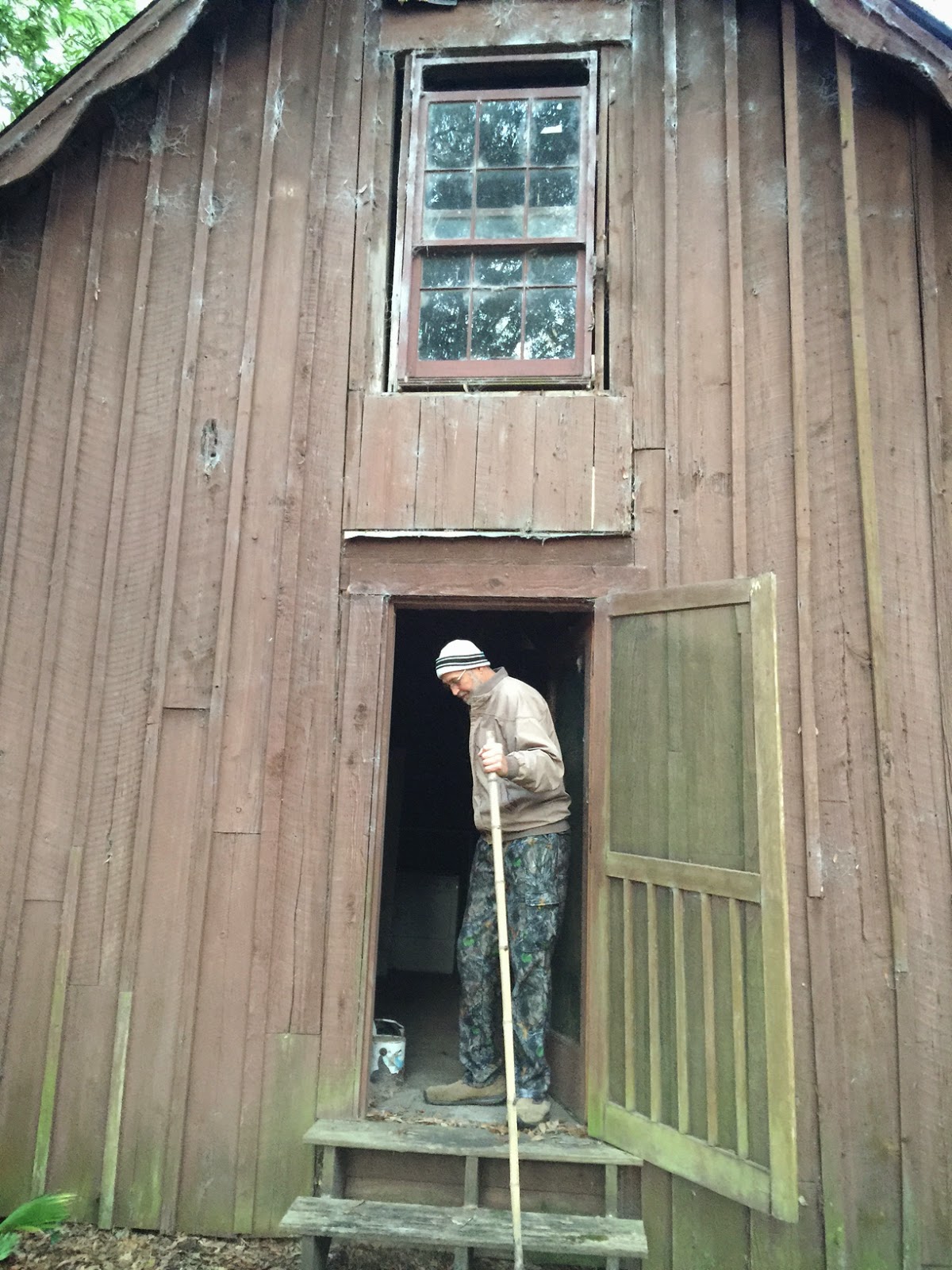 There's that sweet man. I've made him chicken soup which is what he wanted tonight and we'll eat some and hopefully get to bed early. I'm exhausted. I wanted so badly to lay down but I knew if I did I would not wake up until morning so I've kept moving, making the soup, tidying, taking care of the man, watering the plants, starting laundry.
It will be so nice to lay down beside him tonight, knowing we can sleep until we don't want to any more with our cat beside us. She was so kind to me last night, Maurice was. She curled right up under my arm and let me pet her and pet her. She seems to know when I need that although for all I know, she was just itchy. Whatever, I did need the comfort of her silky fur, her warmth. And she allowed me to have it.

Another day in the life. And here we are and isn't that fine?
I think so. I really do.