It's been a real full day for me. I met Bug in Monticello along with the sweet preacher man who works for Hospice and was in a play with Kathleen and me about one million years ago. Also Jan, of Jack and Jan, The Lovers. We were supposed to meet in the Opera House but the guy who works there didn't seem to be around so we just took the meeting over to the coffee shop across the street where I saw my dear friend Liz's son who was stocking up on coffee and bagels. What a handsome lad he is! How sweet! We agreed that he has the best mama in the world. This is a fact, Jack. He's going to come by and talk chickens soon. I'm looking forward to that.

Anyway, Bug and Jan and Andy and I all sat at the table with our beverages and notepads. Bug has done almost everything that can be imagined to get ready for this event on Saturday. Andy wrote out a loose schedule for the program and I wrote one thing on my note pad. It said, "Food."
We had decided to have some finger foods. Real finger foods. No spoons or forks needed. No dips, no sauces. Jan's going to do the sweet things, I'm going to do the savory.
Because Kathleen was a good southern woman in every sense of the word, I think I will make little ham sandwiches. Ham is what you eat in the south when someone dies. It is the way of it.
A person dies, a pig must die. It is a tradition based in Paganism, I would imagine. And Kathleen would approve of that too although she did not eat red meat.
I might also make egg salad sandwiches because Kathleen and eggs? Yes. They go together. And that would be most fitting.
For the rest of it, I'll probably get some Costco stuff. It'll be fine. We kept telling each other that it is best to just let all of this flow. I think that is true.

After our little meeting broke up I went with Bug out to their old house and got Kathleen's soap-making supplies. Essential oils and the soap molds and the plastic she used to line them. Lye and coconut oil, a little scale to weigh out ingredients. I hope to god that I will actually make soap with these things. Please remind me if I ever seem bored or at loose ends.
Promise?

So after I loaded up the car I thought, "Hell. I'm going to that wedding." When I saw my friend Judy yesterday, the Judy who works at Publix with Lily whom I always stop and gossip with, she said, "You should come!" And I said, "Well, maybe..."
But shitfire! There I was, right in Monticello so I went to the CVS and bought a card and then to a restaurant run by a woman I know and admire and bought myself lunch and a gift certificate to put in the card as a gift and then I drove to the office where Judy's bride works which they turned into a little wedding hall for the event. It was just charming as hell. There was a cake and there was champagne. There must have been about ten ladies there and the woman who did the service was so darling I wanted to ask her if she'd be my new best friend. She said the words which Judy had written and it was remarkably short and then the brides kissed and we all whooped and hollered and the officiant said, "Let's do it again!" and so she did and we whooped and hollered all over again.
It was fabulous!

Here are the newlyweds. And yes, I asked them if I could use the picture. 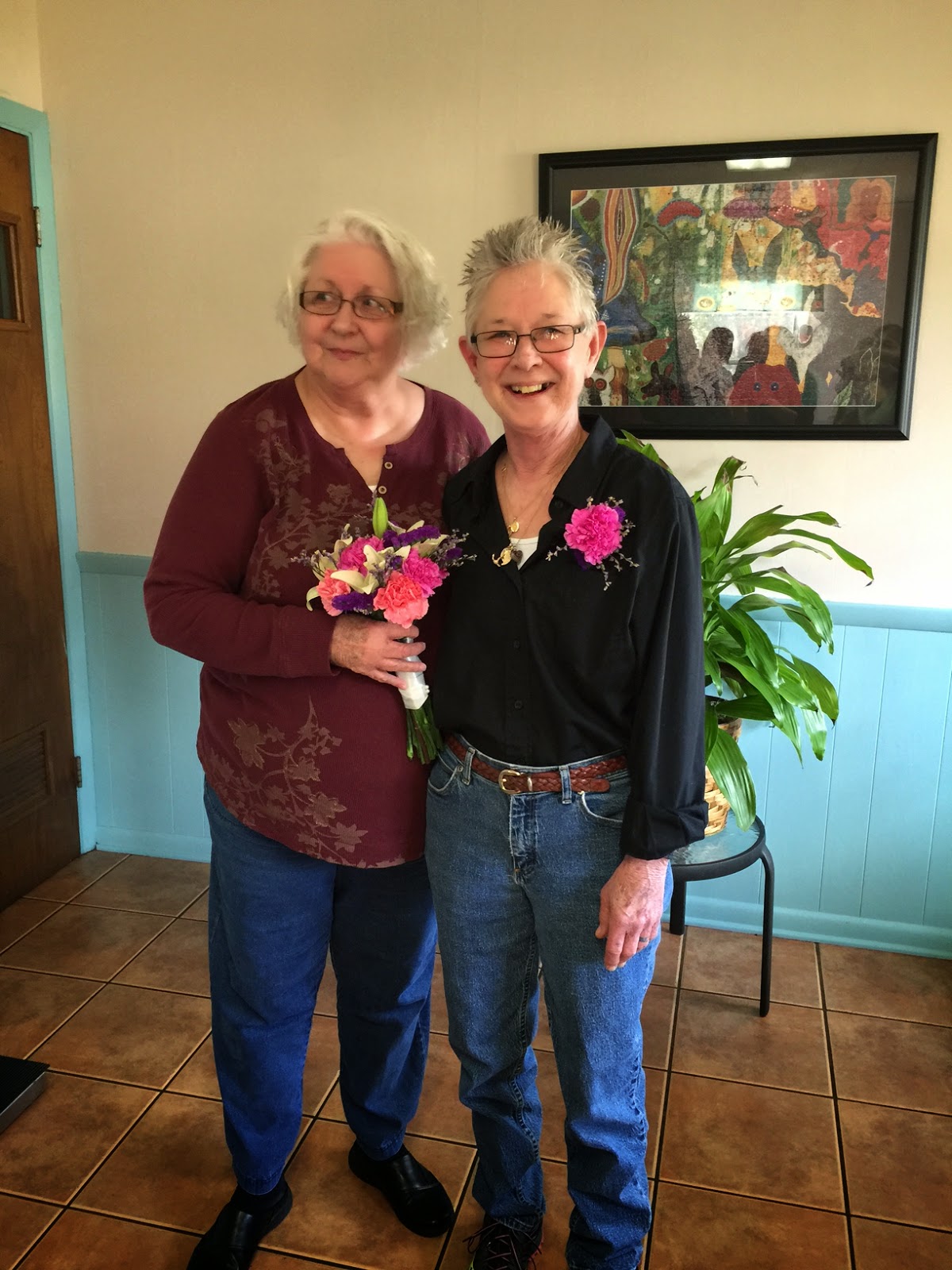 Aren't they gorgeous? I was so proud to be there. So honored. And the other women there were all just so awesome. The lady who opened the champagne did it very professionally and when we all praised her technique she said, "Yeah, I'm good at this. I have a headache today because I was so good at it last night." While we were eating cake and toasting the newlyweds, some of the friends slipped out back and decorated Judy's car and they said they were going to drive right up to the courthouse and circle around and around it and then go in and deliver their notarized license to the clerk by hand.

Dang. I'm getting teary just thinking about it.
It was just...beautiful. After twenty-eight years of life together, Diana can now get on Judy's health insurance at Publix.
Of course their gay marriage is probably going to destroy my straight marriage because, well, I don't know. The conservatives keep saying it will.
I'll let you know how that goes.

When I got home there were railroad vehicles lined up on the tracks from East to West as far as I could see and I have no idea what those vehicles were for. They were working equipment of some kind. It was terrible bad noisy. They've all gone away for now but the tracks are torn up and they've got the road blocked at the crossing.

I unloaded and put up all the soap-making things and did the stuff I always do around here and now Mr. Moon is home. He reports that Owen helped him in his painting today. He went around and removed all the switch plates off the wall. I know he loved that. At one point he said, "Boppy, I think I'm going to go make us a snack." And then he came back with apples and carrots and crackers. How can he be growing up so fast?

So that's been my day and I feel good about it. A small day in my small world but some of it felt really large and important.
Where there is love, there is always importance.
Well, that's what I think.