First Day Of The New Year 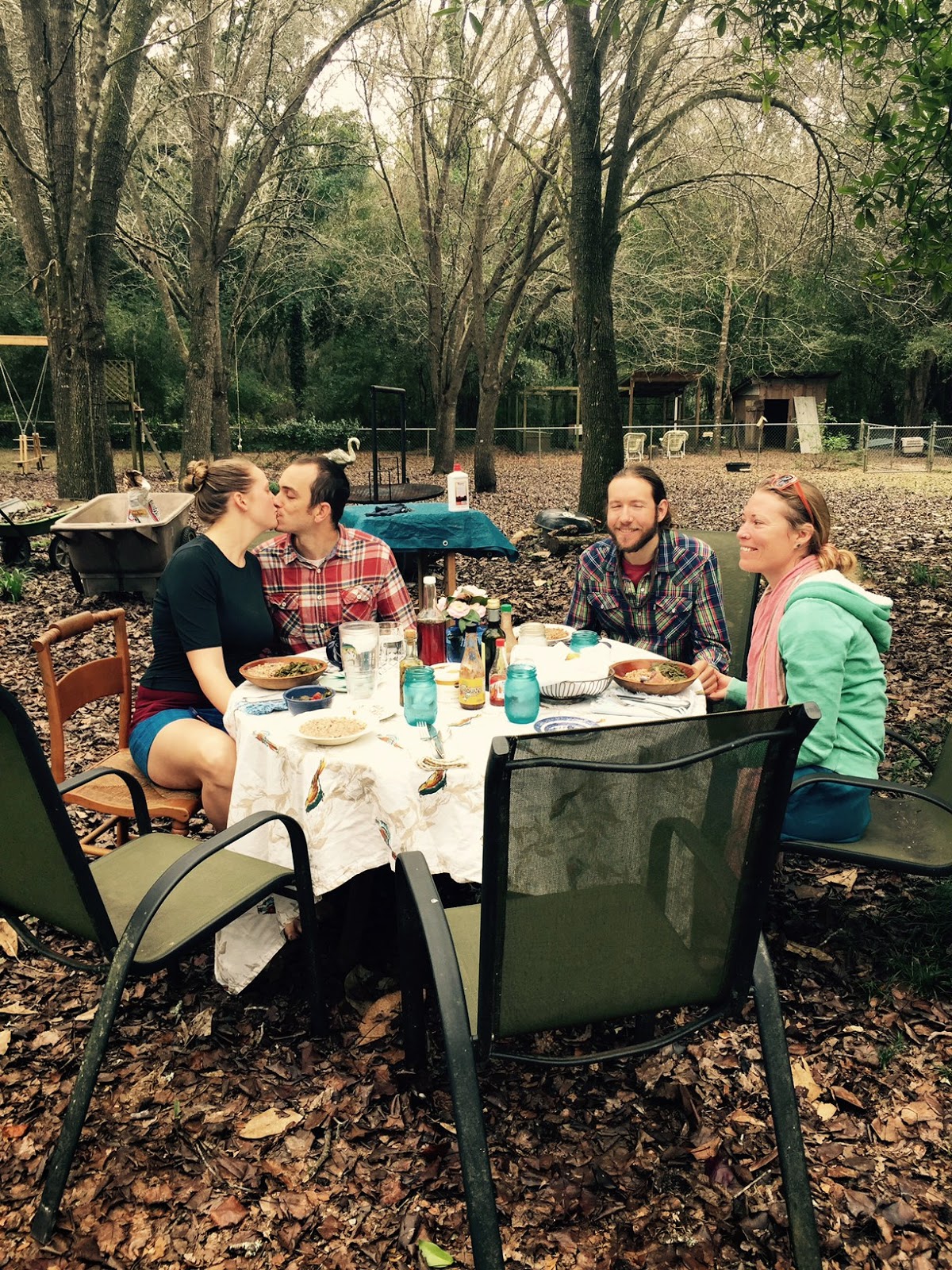 Oh, man. It's been a really nice day. Jessie and Vergil's friends, Amber and Kerby, are visiting them from Asheville and they all came out for the traditional New Year's good luck meal of black-eyed peas, greens, rice, and cornbread. I'd already made the traditional Owen and Gibson spend-the-night-breakfast of bacon and pancakes. While I was cooking, Gibson was sitting up by his Boppy on a stool in the kitchen and he made it quite clear that we was ready for some bacon.
"When you get your pancakes, baby," I said. "They'll be ready soon."
"I want bacon in my HAND!" he said.
I swear to you- if I cooked a pound of bacon for each one of the fellas who ate breakfast here this morning, they would eat every bit of it.

Boppy took the boys to the nearby horse farm to play after breakfast and when Lily got here they were still gone. She and I went out into the garden and picked turnip greens, mustards, kale, and collards. We brought 'em in and I washed them three times because mustards and turnips will hold on to sand like a sticky toddler. I cooked them with onions and stewed tomatoes and soy sauce and salt and pepper and a little bit of coconut oil and Bragg's and vinegar. I cooked one pot of vegetarian black-eyed peas and rice and one pot of the peas with a hog jowl in it because my mother always said, "Peas for peace, rice for riches, jowl for joy."
Nah. Really I just cooked them with the jowl because I wanted to and didn't have a ham bone. But my mother did say that.

Jessie gave Kerby and Amber the tour of the house and the yard and I felt like I'd known them my whole life. Very fine young people, is what I say. I like to use that phrase, "Young people."
When I took that picture and the following one I said, "I need a picture of the young people." 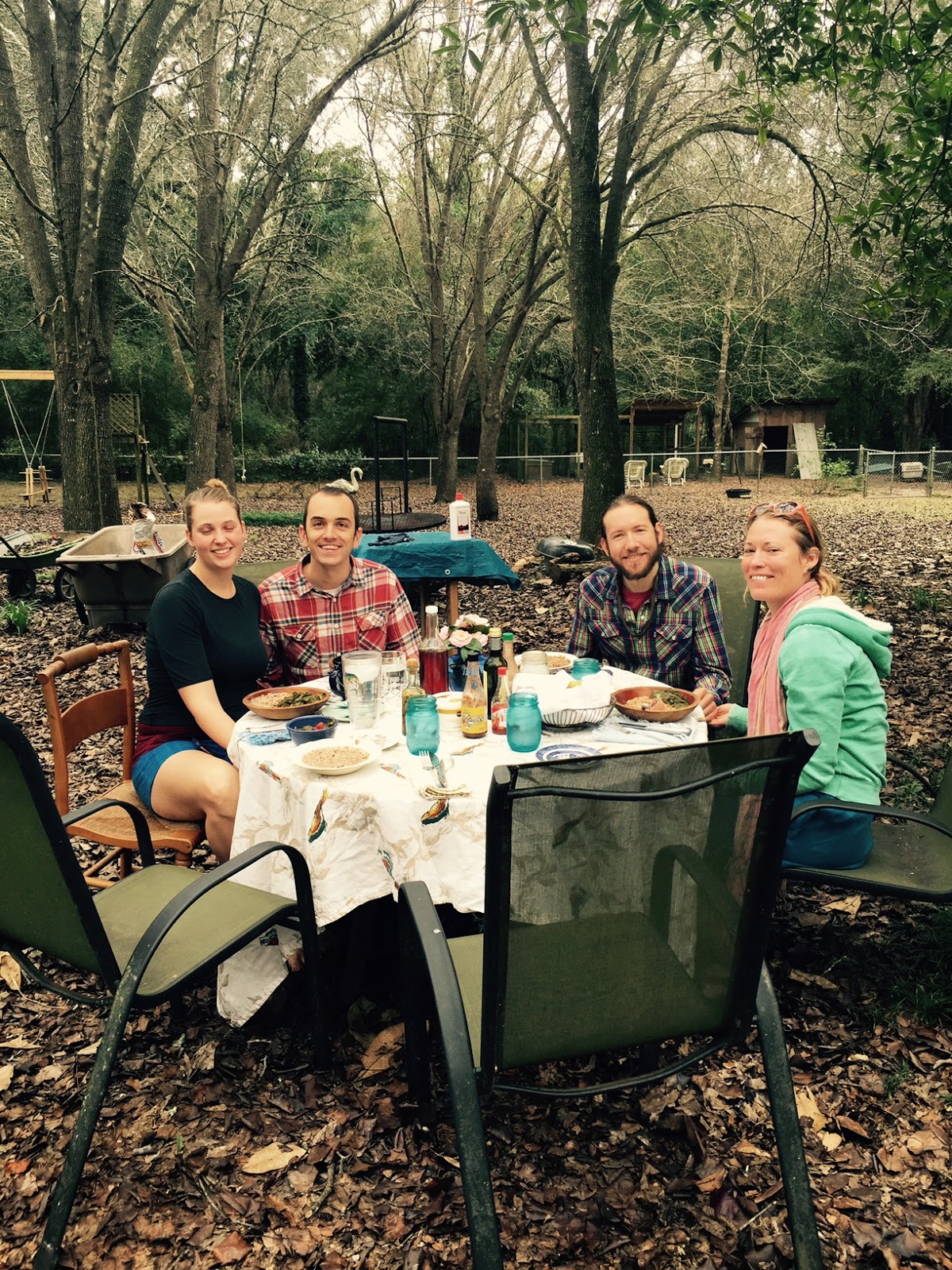 The young people had had a good New Year's Eve, walking all about Tallahassee and actually doing the twist with the real, true Chubby Checker at the big downtown event last night. Vergil especially seemed excited to tell us about this. He and Kerby are brothers from another mother and I loved watching those boys together.
"How do y'all like Tallahassee?" I asked them.
"It's pretty funky," said Kerby.
Well, he is right. Especially when Chubby Checker is in town.

As you can see, we ate outside with the birds and the chickens and Willy and Lily and Maurice and Greta. Maurice hid in the garden cart and strategized how to attack Greta who was chewing on steak-drippings-marinated charcoal. Good for her digestion. And Maurice never did attack her but it was fun watching her being all sneaky and shit.

We ate and laughed and put cane syrup on our cornbread and pepper vinegar on our greens and hot sauce on our peas and we were all so tired that we were silly and I can't remember a meal I've enjoyed more.

After they left I went to bed for a nice nap after reading some more chapters of "All The Light We Cannot See" by Anthony Doerr which is just a wonderful book. He writes those short chapters which make you feel like you're eating potato chips. Just one more. That's all. Okay. One more. THAT IS ALL. No, wait. One more.
Etc.

When I woke up, friends and neighbors were here watching the Rose Bowl and I stumbled around and ate a chicken wing and now here I am and I can hear them cheering and groaning from three rooms away. FSU seems to be involved. At lunch I cracked everyone up by asking who was playing at the Super Bowl this year and then making clear that I was talking about the half-time entertainment and not the teams.

So. New Year's Day and I keep thinking I'll call Kathleen and tell her how well her ducks and chickens are fitting in here with the flock and how much we're enjoying them and how pretty Dovie is and how funny the ducks are and how they go to bed every night with the hens and of course I can't call her. I sent Bug a text though, to tell him that. He's visiting a friend down south.
It's so hard to fathom that she is gone.

I had gotten a text from Lily while I was asleep that a US District Judge has ruled that Florida is Constitutionally bound to start issuing marriage licenses to same sex couples starting next Tuesday and that is that.
Whoa! What an amazing and wonderful thing to wake up to. What a beautiful thing to contemplate as the new year begins.
I am just pleased as I can be.
Justice for all, Motherfuckers!

And Lily also sent me this picture. 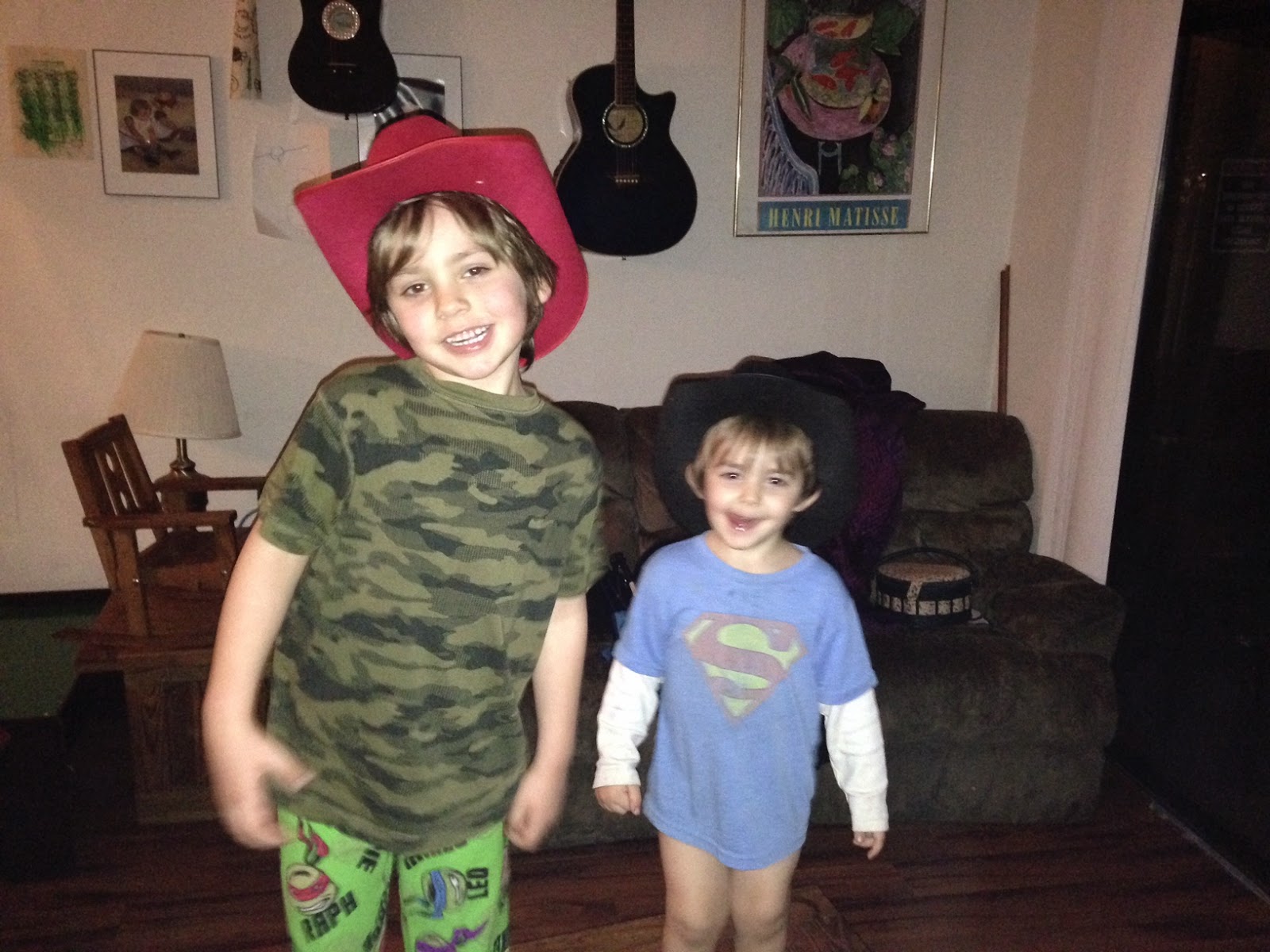 "Your boys dancing to the rs," she said.
That would be the Rolling Stones.

From the cheering in the Glen Den, it would appear that FSU is winning.

I need all the peace I can get.

Boys will be back tomorrow.

This old planet appears to be continuing to let us live here for another day, at least, and a blow for equality and for love has been struck.

And I'm okay with that. I have no idea what will come about in the next year but today's been a good start. I hope it's been for you as well.