Scenes From A Weekend 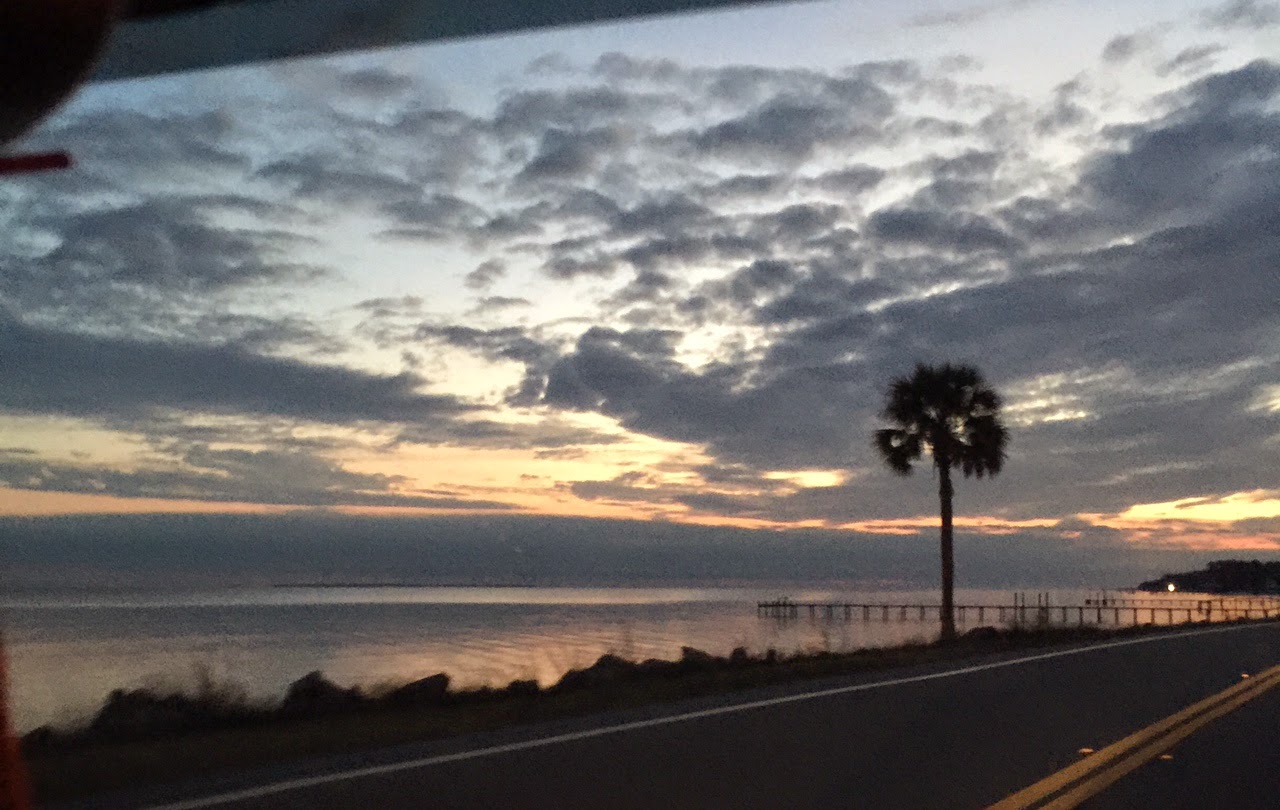 A drive down to Apalachicola. The coastal road and we follow the setting sun in the winter sky straight into town.

A smallish room but plenty big enough for two who do not mind sharing space. Cozy and sweet and yes, with plenty of pillows. The creaky floor of the Gibson, the wooden walls, the windows that do open. In fact, I used ours to slip through to go sit on the porch and then to slip back in. 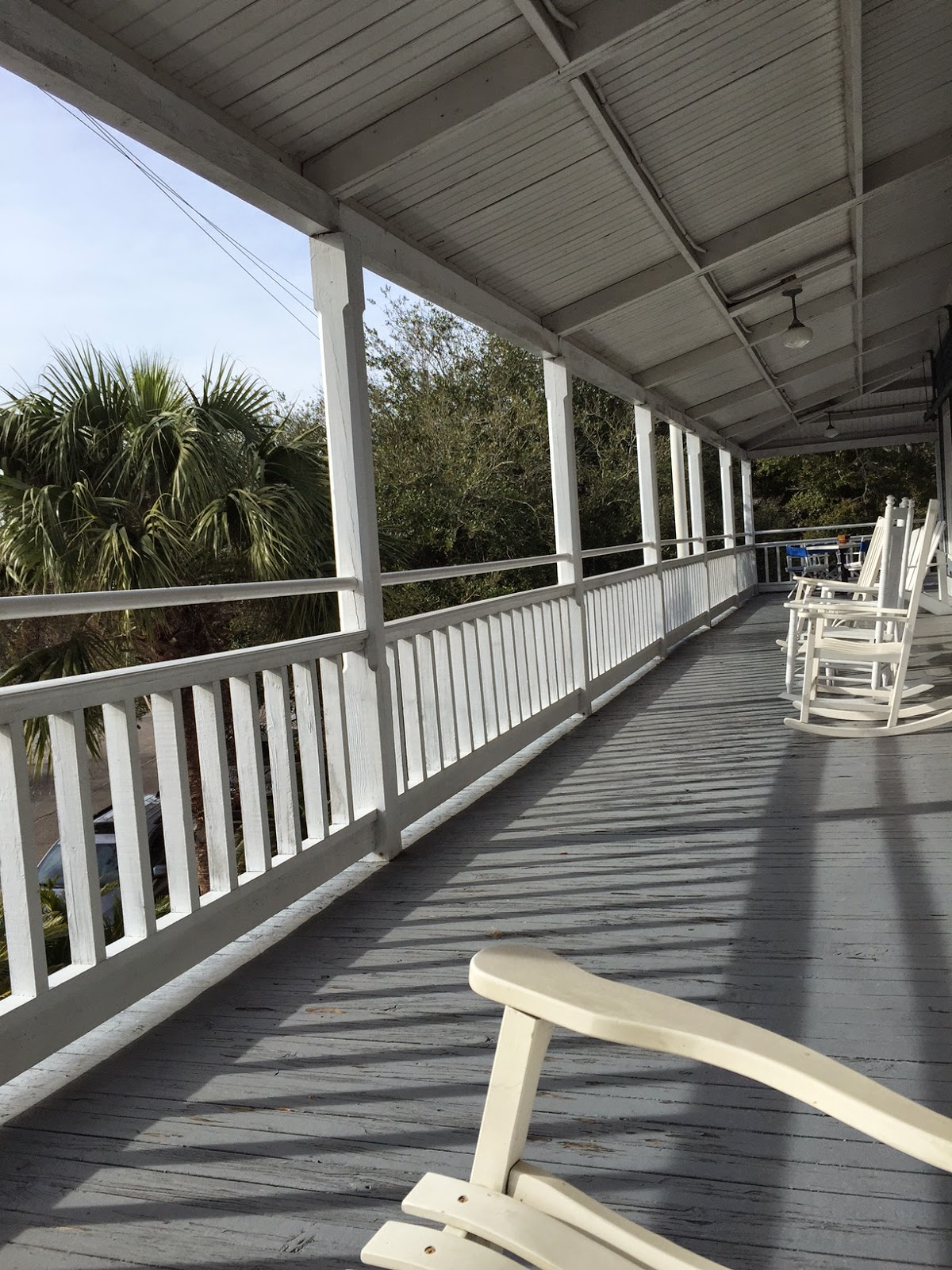 On Saturday morning I heard the tap, tap, tapping of a woman walking, wearing heels. And here she came, dressed to the nines and talking on her phone. "Hold on," she said to whoever was on the other end of the invisible line.
"How do I get back inside?" she asked me.
I wanted to say, "How did you get out here?" but I did not and directed her to a door.
"Thanks!" she said. "I've been walking around and walking around. People must think I'm crazy!"
She did not seem to give a fuck if people did indeed think that and I smiled.

I talked to my ex on the phone on Friday night.
"We're in the RV at the Eastpoint campground," he said. "Drinking bourbon."
"We're on the porch at the Gibson," I said. "Drinking martinis."
"We're going to take a hike in Tate's Hell tomorrow," he said. "Y'all want to join us?"
"Oh hell no," I said. "I plan to hike to the coffee shop."
We both laughed like crazy.

We took our supper in the dining room of the Gibson. It was delicious. I had my first seafood platter ever with brussels sprouts. That was odd but good. We had a drink at the bar, went upstairs and got in our bed. It was lovely. We slept until ten, woke up and drove across the beautiful dinosaur back of a bridge to Eastpoint across the place where the Apalachicola River runs into the Apalachicola Bay. We had breakfast at the Mexican place where they serve American breakfast. It was delicious and American as all get-out and we were surrounded by other Americans of all colors and sizes and ages and so forth. I love that place. Hunters and families and old folks and ladies out for breakfast. When you get there late, you get lots of bacon.

We drove back to Apalach and did indeed hike around a bit. We went and got REAL coffee at Tamara's and it was wonderful. Tamera is from Venezuela and runs about three places in town. She told me she only serves one size of coffee. People don't need as much coffee as they buy at Starbucks. She thinks that's ridiculous. She also sells beautiful baked goods. We just had coffee and sat outside and watched the river. We stopped in at the place I love/hate because they sell the most beautiful things and they all cost too much for a sensible woman to consider buying.
I bought a pair of boots. They were half price. They are soft as butter. They feel like ballet slippers on my feet. 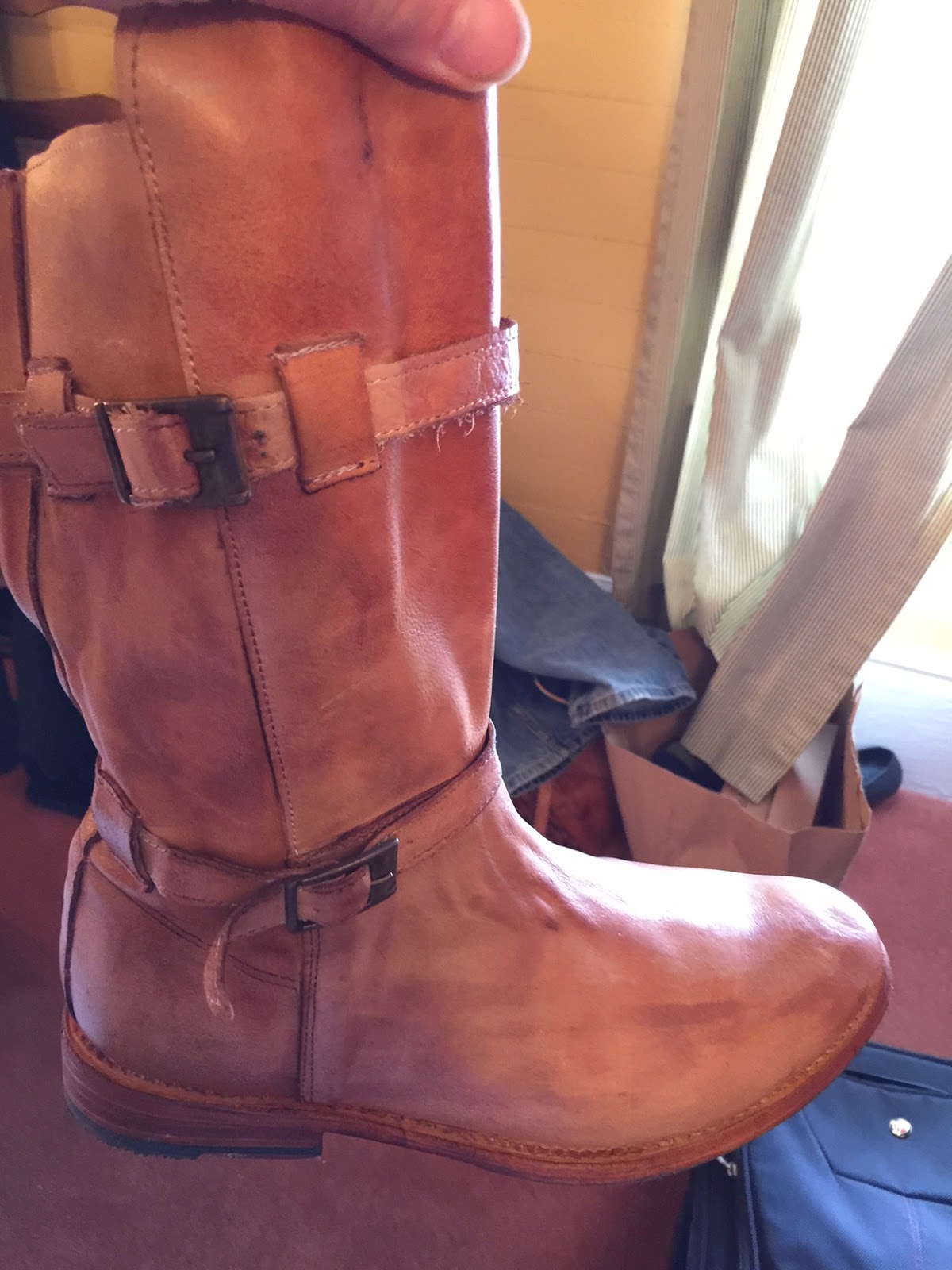 They smell like a saddle shop. I only took them off to sleep.
First pair of boots I've bought myself since 1983.
They will last me the rest of my life.

She had to go to Spencer's three o'clock show and I had to take a nap.
Yes. I know. I'd just slept for ten hours. Shut up. It was wonderful.

We got up and got dressed and went and ate at an oyster bar. The couple next to us at the bar where they shuck the oysters was so strange. Our age? I can't tell any more. Our server/shucker was Mexican and yet, the English that he did have was so heavily southern accented that I feel he must have learned it on an Apalachicola shrimp boat. The man of the couple ordered in beautiful Spanish. His wife, however, ordered in English, and she had just started a diet and so she wanted a grouper sandwich but without any bread. Or anything. No sauce. "Just the meat. Is grouper a white fish?" She consulted her little diet booklet more than once.
The poor server.
Then she began her instructions on how she wanted her salad.
"Just lettuce, tomato, cucumber and onions. NOTHING ELSE. No cheese, no carrots, no croutons. Just lettuce, tomato, cucumber and salad."
She repeated this approximately eight times. Very, very slowly.
Why didn't her bilingual husband jump in and help? I do not know. He was pretty busy sucking down oysters and drinking Pepsi.
Oh- and her water- no ice. They brought her water. With ice. It got sent back.
It disturbed me. I wanted to ask her why she didn't make her own damn dinner.
Again, I did not. I kept rolling my eyes at Mr. Moon though. I'm surprised they didn't fall out of my head.

We finished up and walked down to the bar where my ex was playing. His wife was there and it was good to see her and the bar was full and we sat next to a couple who introduced themselves and I think they were a couple although they could have been grandmother and grandson or mother and son or Harold and Maude. I do not know. But it was interesting. They loved the music.
Everyone was having a big ol' time. 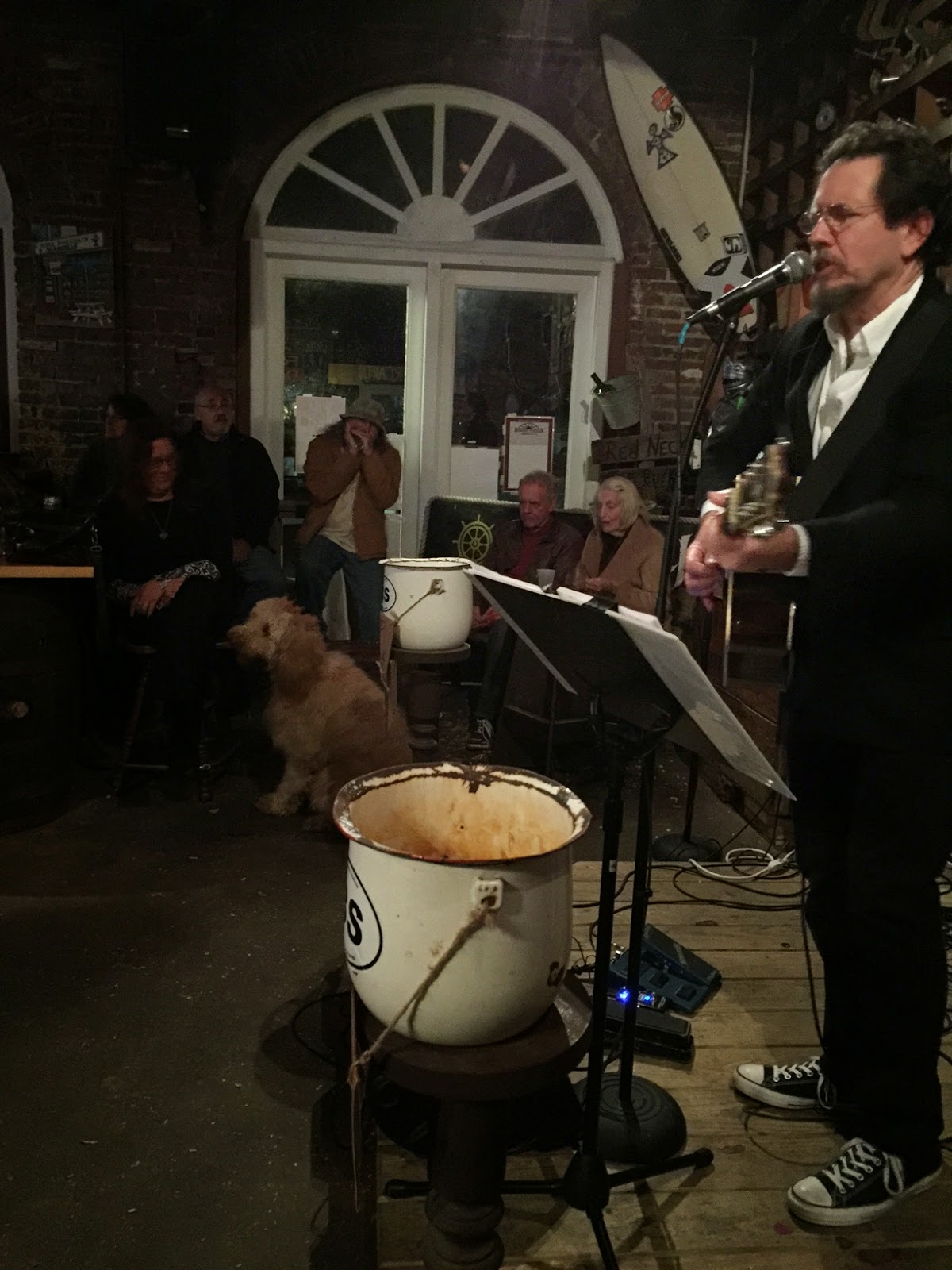 See that dog? He was as big as a sheep. Jerry has two tip jars which are repurposed chamber pots. One says, "Keep playing." The other says, "Stop playing."
Everyone put money in the "keep playing" one.
I really admire him. He's recently retired from his "make the money" gig and has gone back to playing lots and lots of music. Most of his life he played with a band so this solo gig thing is relatively new and he rocks it and he seems to be enjoying the hell out of it and he's damn good at it.
It's inspiring and a beautiful thing.

We left the bar when it was time to go see Spencer Bohren's show. We walked down a block and over half a block and there we were. Apalachicola is not big. The place where Spencer was playing is a jewel box of a restored theater. The Dixie. Dixie herself's daddy did the restoration and Dixie runs the place now. Just a beautiful little theater. Spencer had left us tickets at the door. We found our seats- the front row center table. Jesus!
Here's what the stage looked like. 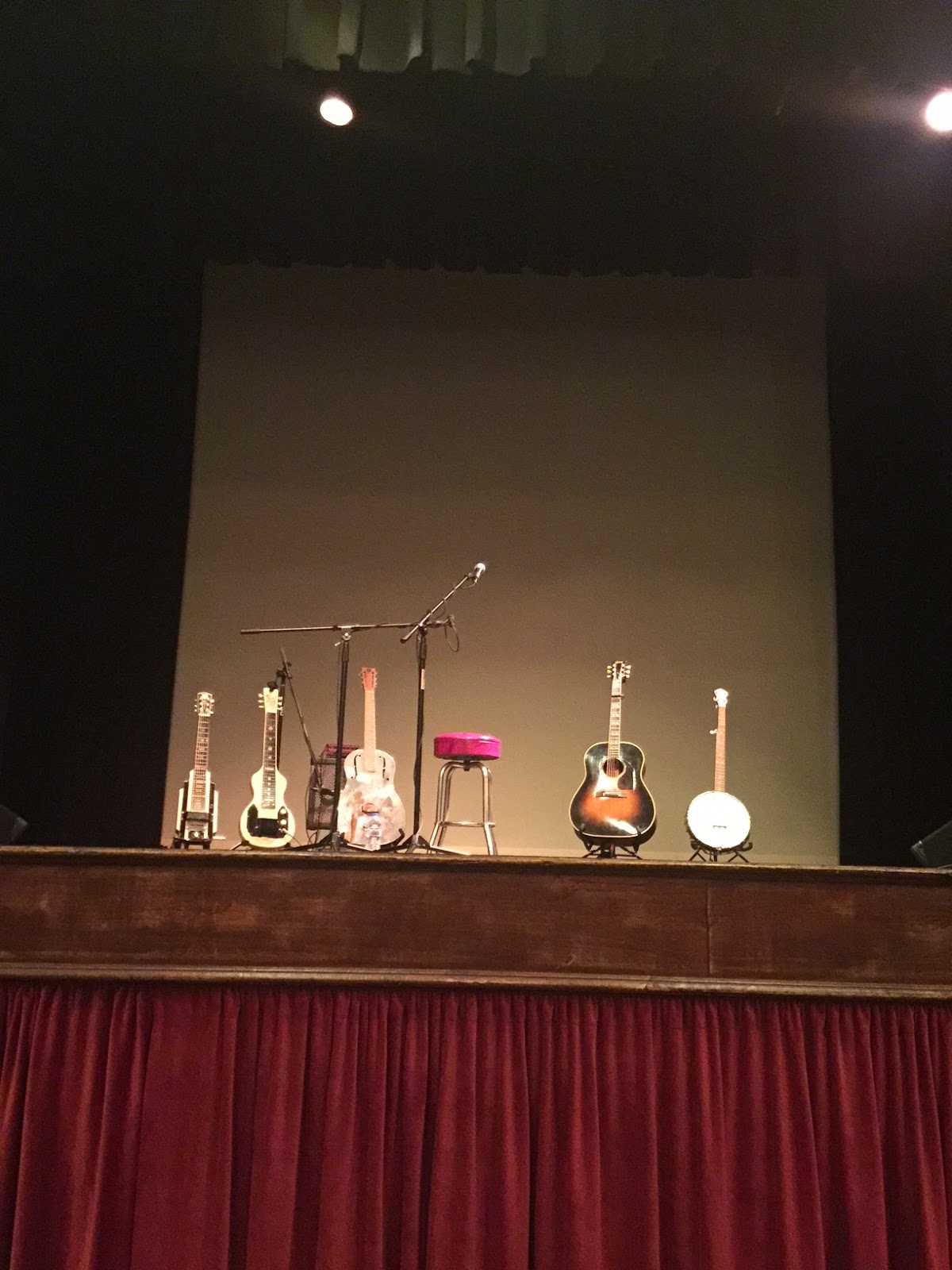 Spencer's eclectic collection of the tools of his trade.

Now listen- I've heard Spencer play a bunch of times. A BUNCH! He even played on Prairie Home Companion a few times and I sure as hell listened to him there. I've heard him play in bars and at festivals. He's played all over Europe. He still plays all over Europe. And when he came out onstage last night and picked up his lap steel and started playing, I was astounded. He's always been an amazing musician but he's broken through some sort of membrane and entered a completely different sphere. The combination of the instruments of his voice and his guitars was a spine-chilling thing. A send-you-out-to-the-deepest-part-of-the-dark-black-sky-and-make-you-whimper kind of thing.
It was transcendent.
And for a few moments, I thought I was going to have to kill someone. The guy and the woman sitting directly behind us were drunk. I mean DRUNK, BABY! And they thought they were at some low-down bar or maybe some church where call and response were part of the deal and trust me- I don't mind a little of that. Been known to participate a bit myself. But this was ridiculous.
"Oh yeah! Play it brother!"
"Uh-huh! I know! I been there!"
"Aw man, you the man!"
Etc.

It was...distracting. It was...disconcerting. I wanted to turn around so bad and tell the guy, ask the guy, "Could you please shut the fuck up?"
Again. I did not ask the question begging to be asked. I knew that if I did, Mr. Moon would have to defend my ass and that would be even more disruptive than what was going on. This guy and his lady were well beyond the borders of polite and acceptable behavior.
But then suddenly, they quit. I did not hear one word from them.
It was like a miracle.
And this morning, Spencer told us that Dixie had taken care of it. And the couple were escorted out.
I need to meet Dixie. I probably will one of these days. I can't imagine I won't. 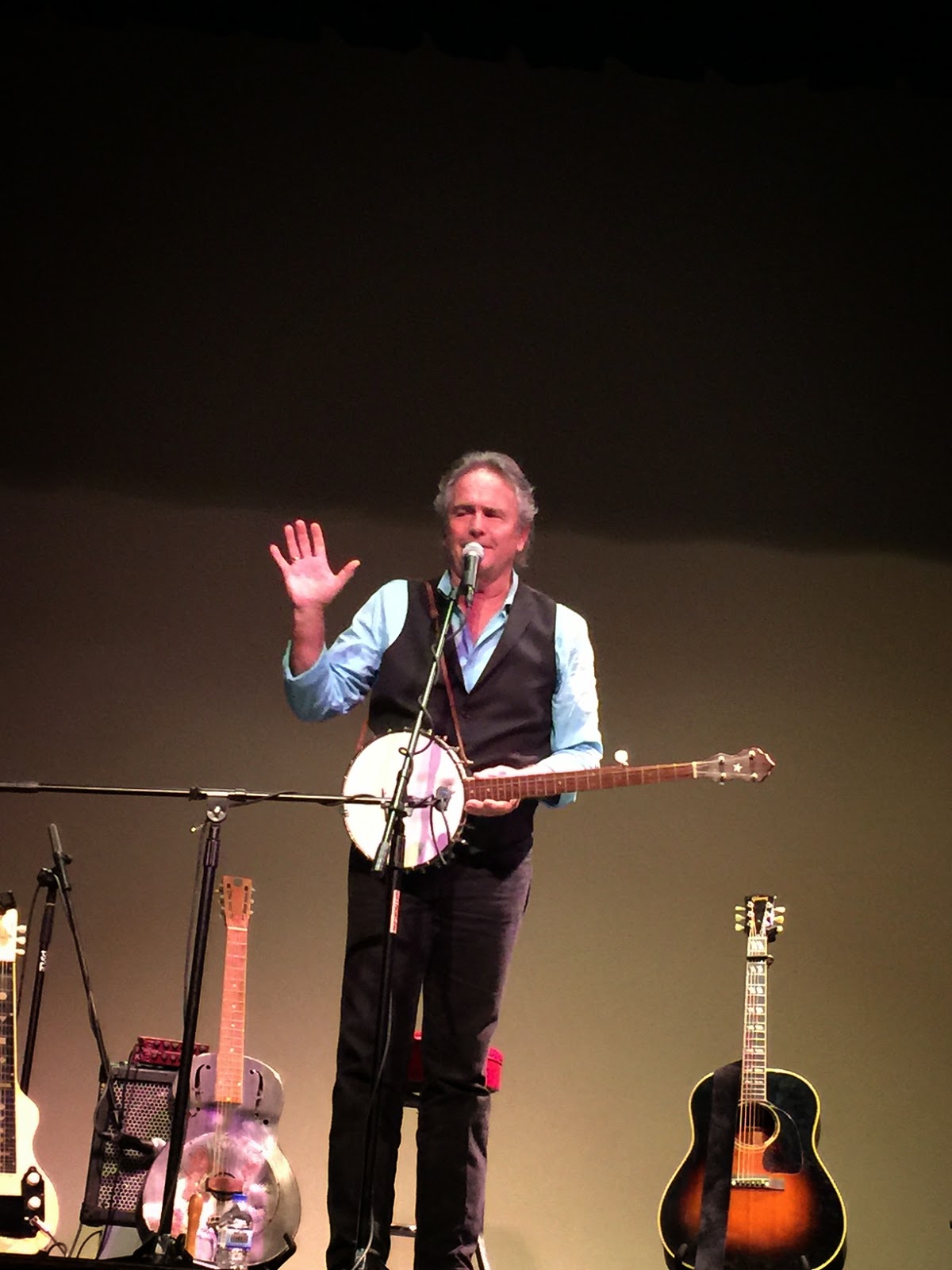 Spencer not only sang and played, he told stories. And he is a consummate story-teller with a wicked gift for accent and dialog. And he had some stories to tell. He and Marilyn actually lived at the Gibson for awhile back before it was restored. Back when the bar was patronized not by yuppies and retirees but shrimpers with at least two knives on their person and perhaps a gun tucked into a pocket. Fishermen with scars from neck to knee. Men who could brave the coldest, nastiest nights on the ocean and whom Spencer could make cry with a Hank Williams song.
Aw man. It was a beautiful evening.

After it was over we went back to the Gibson to wait for Spencer and Marilyn and sat at the bar where Spencer used to bartend and play guitar to shrimpers. 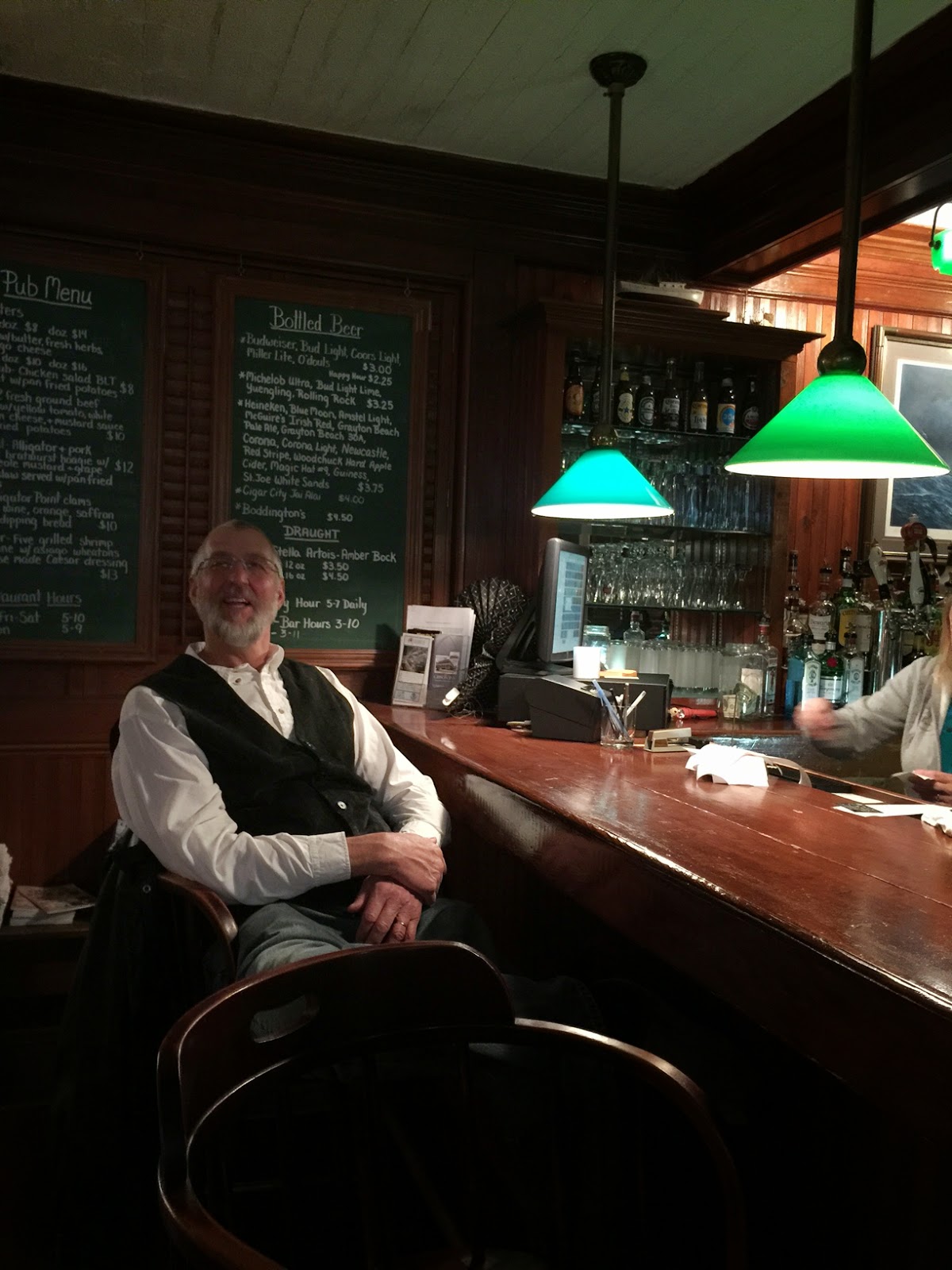 Anyway, we visited with Spencer and Marilyn for awhile in the lobby and this morning we all went to breakfast at a place on the river and did even more catching-up and then we had to pack up and come on home. Before we parted, I asked them if I could take a picture. They said I could. I texted Marilyn and asked her if I could use it on the blog and she hasn't answered but I'm going to use it anyway. It's so beautiful. Who could have a problem with this? 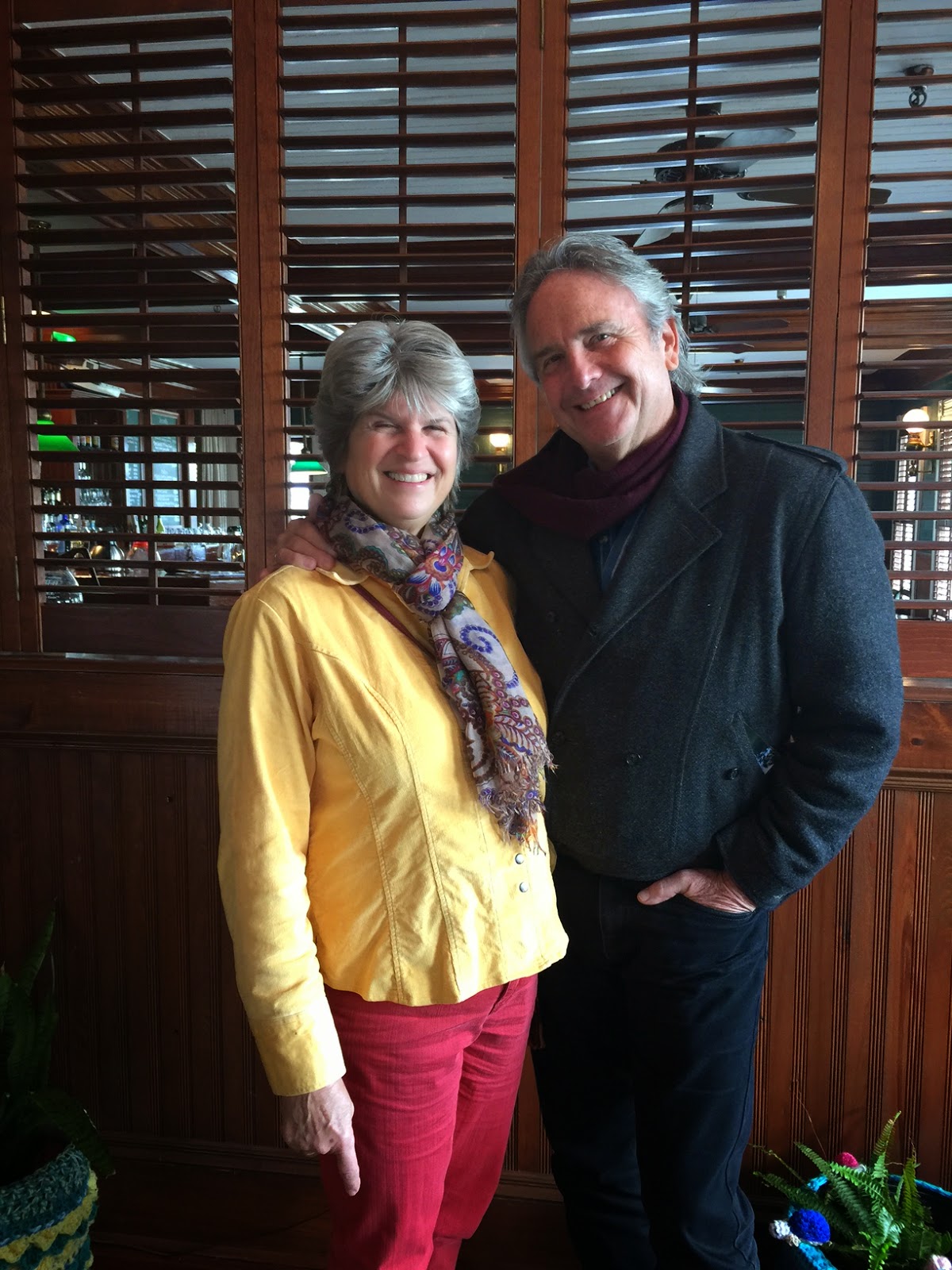 It's amazing to me that we found each other, that all these years later we have come back together, that we are all still healthy and happy and in love with our sweeties. That our children are good. That we have grandchildren.
One of those everydaydamn miracles.

Mr. Moon and I stopped at our property on the way out of town. Here's the cedar tree that I planted in 1995 which had been our Christmas tree. 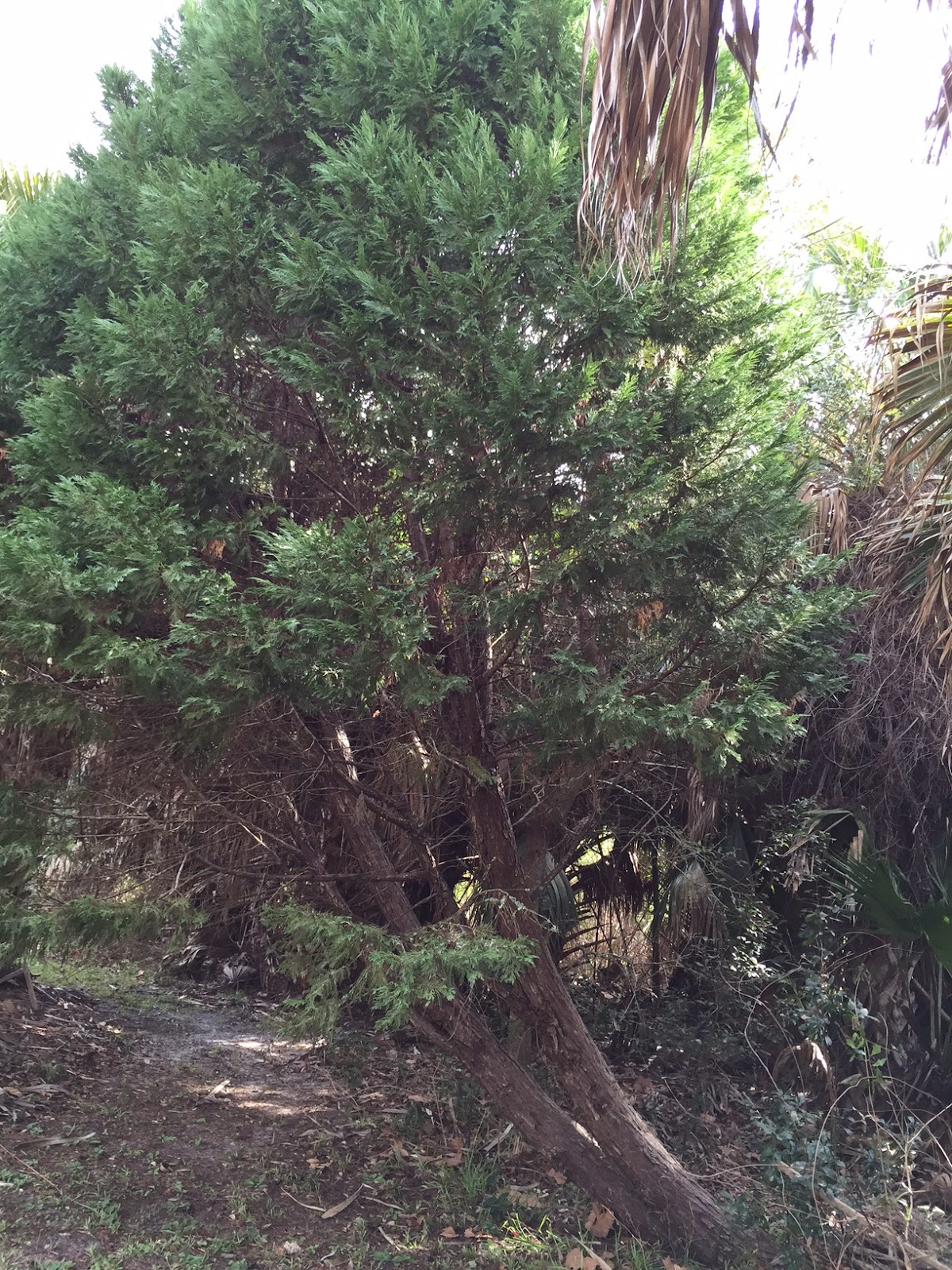 There is magic. It is real. We had some of that this weekend. And now we're home and it's good to be and all the birds are alive and all of them except for Dovie whom I cannot for the life of me figure out where she roosts, are in the hen house. I've picked greens from the garden to make a salad. And ain't no damn woman on Atkins or whatever going to interfere with my enjoyment of making or eating it.

God. I lead a blessed life.