The Coming Of Night Is Not Always To Be Trusted 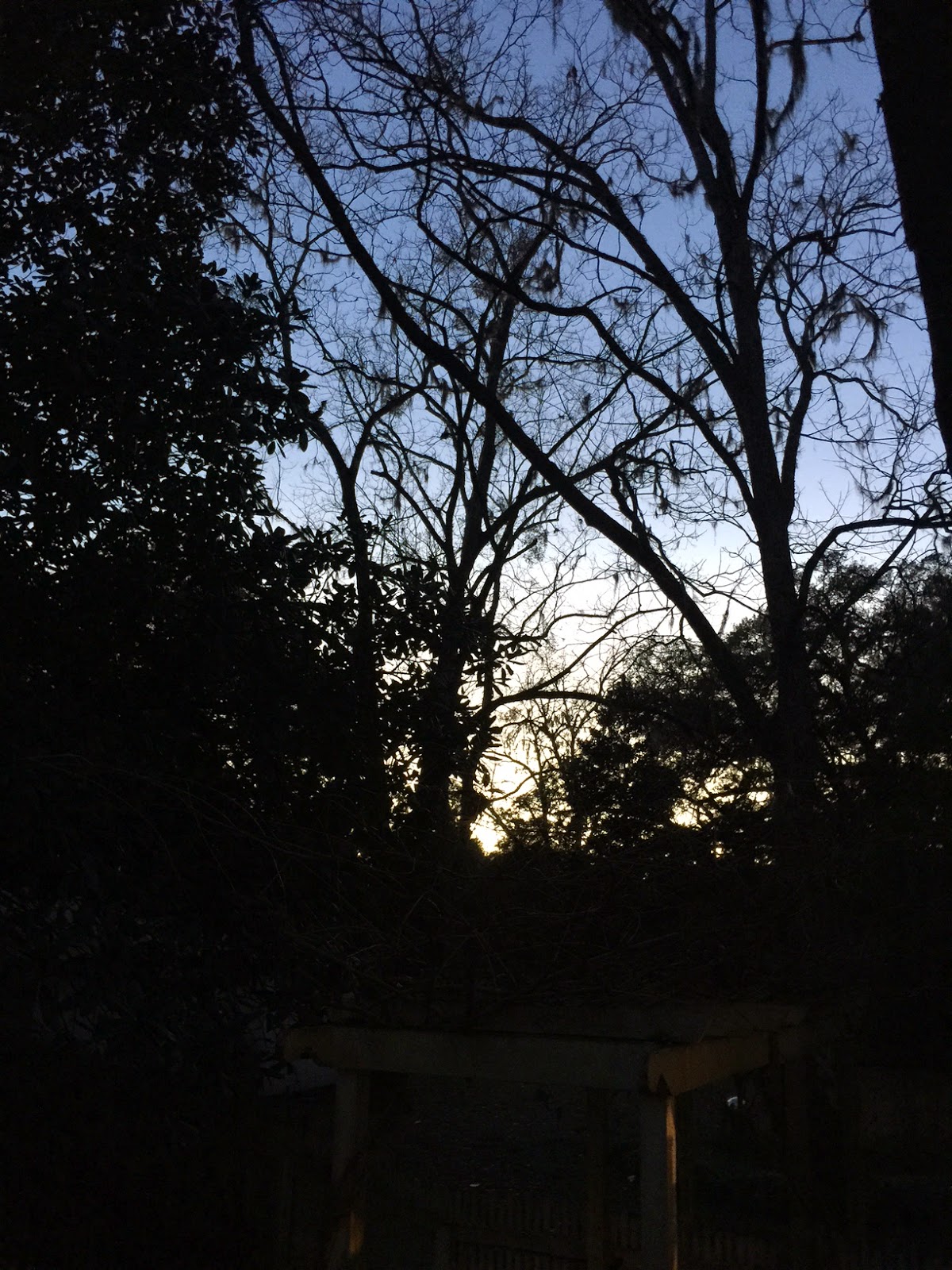 For as long as I can remember, the time of day when the sun is leaving the sky and darkness begins to creep in has been hard for me.

It may have started back when I was still a very small child and it would be time for my father to come home from work and he so often did not. Sometimes he didn't come home for days and even weeks and I can remember quite clearly, crying my eyes out, wailing with the wanting of him to come home, to make us a family again and how did I even know what a family should be, never really having experienced that particular sweetness except on the most limited of occasions? I have no idea, but somehow, even in those pre-Leave It To Beaver/Father Knows Best days, I did.

And then as I grew older there were the weeks in summer my mother left us with our grandparents to go to Gainesville to work on her Masters Degree and for some reason, the daytimes were okay and were filled with river and woods and friends and my grandparents did an adequate job of taking care of my brother and me but as night drew near, the realization that my mother would not be there to tuck us in would descend upon me with great heaviness and it was hard. I started sleep-walking those summers. I would wake up on the couch, or my grandfather would find me pacing the house.
There is little doubt what I was looking for.

My mother remarried and the early evening because the time when my stepfather DID come home. Ah- the opposite problem. Because he was angry and insane and a horror to us all and none of us in the house could let out an easy breath when he was home and I feared his presence in my room behind my door that only locked from the outside and I could see the light of the TV he watched from the configuration of my room to the Florida room and he watched late into the night or probably, slept there, that light like a threat in and of itself and unlike some people who cannot sleep without a light on, I do not feel safe unless I am in total darkness.

When I was married at a young age, my husband frequently was not home at sunset. He was a musician, he played in bars many nights and I would face the twilight without him in our little cracker shack that I did love so much way deep in the woods about ten miles from here where I am now. I was already a mother then and had my babies to tend but every bit of loneliness in the entire world seemed to distill itself and insert itself into my very soul as the sun fell below the trees and they became only black shadows in the darkness. I was not afraid of anything particularly, except my own madness which I could feel creep in every night and I would tamp it down as best I could and make our little supper and crochet and watch TV after baths or sew dresses or shirts or quilts or blankets,  and read of course, far into the night and then finally lay down to lie in wakefulness until the hour long after bars had closed, waiting to hear those car wheels on the clay road which led to the house.

And after we divorced and I moved to town with my children, those hours would still be the hardest. The day of classes and getting children to school and back were done and I was faced with an evening of study and aloneness and every time in my life I've gone through a major depression, sunset has been the worst time of all. A sort of hell of anxiety and sadness. A frantic and helpless feeling of almost unbearably painful ache.

It is not so bad any more and I have counted sunsets beside the water, whether Gulf or Caribbean or river as some of the best moments of my life, mostly with my beloved beside me to observe the magic of water and sky fire, of soft drift into darkness, of water lap or wave hiss, of bird call and flight.

But sometimes it creeps in again. That panicky melancholy of coming-dark.
Tonight I have felt it. Even as I sit here in this place I love as if I were born to be here, even as the chickens whom I love make their scratching way into the hen house to take their sleep, even as the ducks get their last gulps of water, taken in their shovel mouths and their last dip in the little puddling tub. Even as I know that my husband will be here soon and I will heat up last night's soup and cut more avocado and chop more cilantro and make a salad with greens I just picked an hour ago. Even as my hallway is lit with gentle light and the camellias I fresh picked today sit in their pink vase. I feel it and I despair of it and yet- what can I do?

It is a part of my wiring, I guess. In one of Yoko Ono's songs she speaks of "the faint, faint sound of the childhood bell, ringing in my soul."
That phrase has always rung true in my soul. I understand it.

I know it will not kill me. It never has yet, at least, and I doubt it ever will.

"She died of twilight sorrow."

Has that ever once been written on a gravestone? I doubt it.
But perhaps it should have been, one time or another. I am quite certain I am not the only person on this planet who has been sickened unto death by it. Not unlike having cancer and yet eventually and ultimately falling to pneumonia.

Yoko's husband, John, wrote a song which he sang with primal loneliness and fear and in it he screamed, "Mama don't go. Daddy come home!"
He screamed it over and over and over again until his voice must have been raw and bleeding with it.

That too, I understand.

If there is any lesson to be taken, it is that, I suppose.

Let us all sleep well and wake to newness, and may the shadows of night's sorrows be polished away by the morning light and may we rise to dwell in that light once more.