So this morning we got up early and went to town to go to Hank's 7th Annual Springtime Tallahassee Parade Party.
I love this party. Every one loves this party. Babies, grandmas, mamas, daddies, uncles, aunts, kids, gothie sort of people, gay, straight, bordering-on-everything-why-try-to-define-it?
Mr. Moon and I picked up Lily and Owen because Jason had to work and we drove downtown and got a fabulous parking spot and walked over to Hank's where the drinkin' had already begun (hey! it's tradition!) and a grit bar was set up.
A grit bar! Do you hear me?
Grits in a crockpot with various sorts of cheeses and bacon to put on top! Awesome! Hank is brilliant. And lots of other food including deviled eggs that I made from my hen's beautiful eggs and berries with blue cheese and nuts and parsley that Taylor made and a fantastic breakfast casserole that Lily made and okay, I didn't drink but I sho' did eat.

All right. Mostly I'm going to give you pictures.

Here's Taylor, since I already mentioned her. I love me some Tay-Tay. 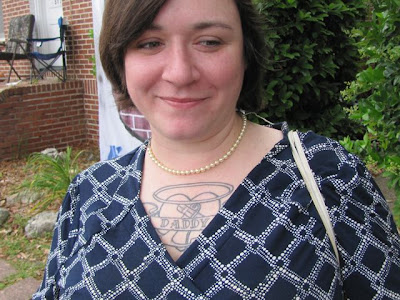 Here's a beautiful tattoo on the lovely bosom of a woman named Loren. I asked her permission to shoot and post. She graciously gave it. 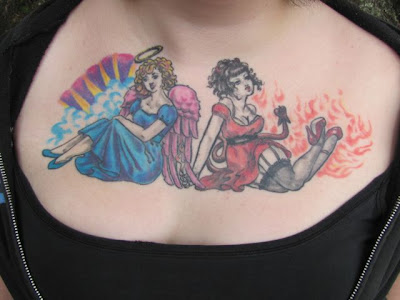 Our Togi who is in a pact with May to be hot FOREVER! 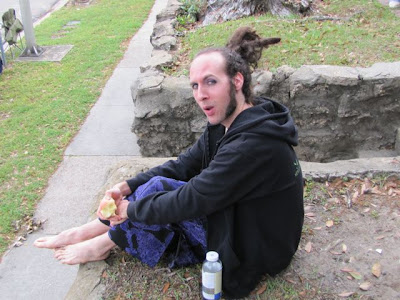 Someday I'm going to have to get Togi to show me how to do eye make-up. His is always exquisite. On one of his last posts on FaceBook he said that he is "heteroskeptical."
Togi is like Yoda, only with much better grammar.

Okay. Okay. Background information. You know that our governor here is a criminal, right? If he weren't richer than Midas, he'd be in jail. One of those CEO-I-had-no-idea-our-company-was-defrauding-Medicare! things. And he's been in office for four months and his approval rating is something like 12%.
That's low, baby.
So anyway, the dude just does not give a shit. And he agreed to be the grand marshal of the parade and I have no idea whose bright idea it was to ask him but anyway, there was great talk beforehand about how to show disapproval when the Crim Gov walked by.
A few strategies were to wear black and to stand and turn backs to him as he walked by.
So I did that. But after I turned back around I snapped this: 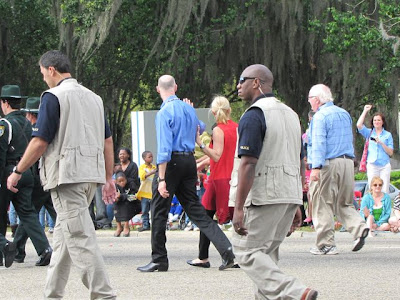 It would appear that Voldemort turned his back on US! I can't imagine why. Dig the bullet-proof vested escorts. 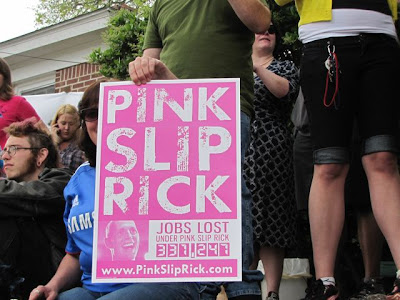 I got one picture of a child holding one with her mama in the background, arms folded across her chest and a scowl on her face. I'd post it but who knows what the repercussions might be and I'm courteous like that.

Anyway, after (P)Rick Scott went by (my brother gave him that name- it's his gansta' name) the real fun began and we cheered everyone from the Krishnas to the highschool bands to the martial arts schools to the beauty queens to the pirates. 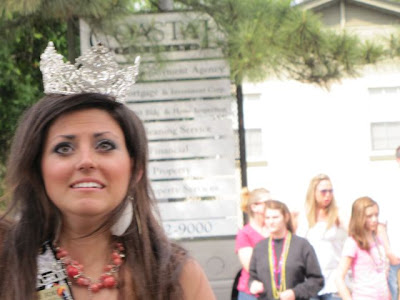 A beauty queen. She looks terrified. I love this picture. She's probably looking at us. 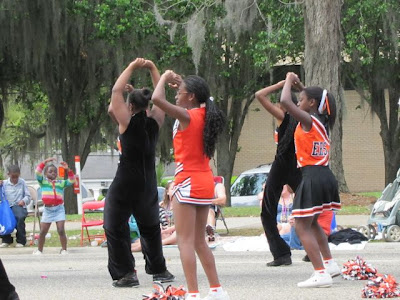 These gals got a LOT of applause from us. 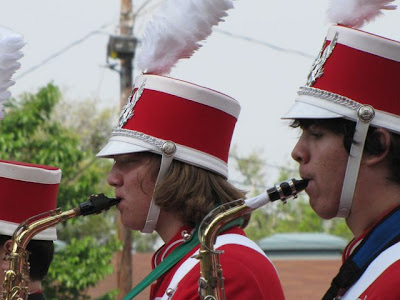 Who doesn't love a marching band? 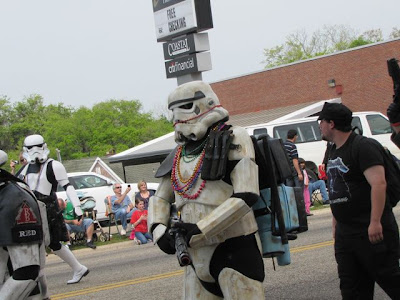 I have no idea what this was about. None. Whatever. They rocked.

May got to show up before work and it was a JOY to see her. I cried after I took this one. Just cried. 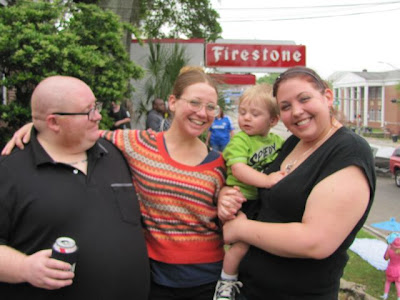 Owen pretty much wore this expression the entire time. 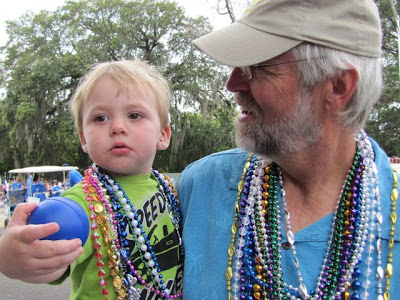 As you can see, though, he figured out the beads.

My niece, Riley, posing with some of her treasure. 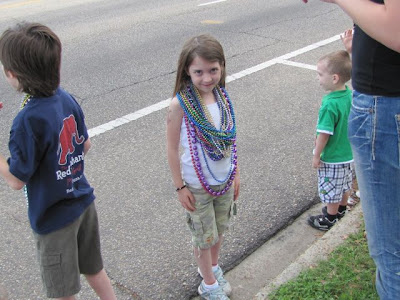 Jessie, Riley, my brother Chuck (funniest man in the world), Kian (my nephew), Owen and Bop. 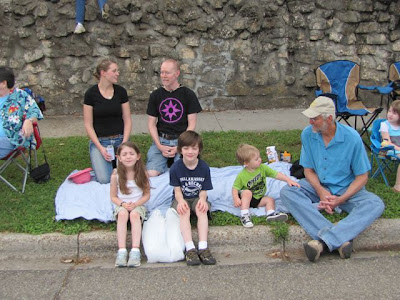 I have no idea why Kian and Riley's eyes are closed but they were in the other picture I took of them too, so... 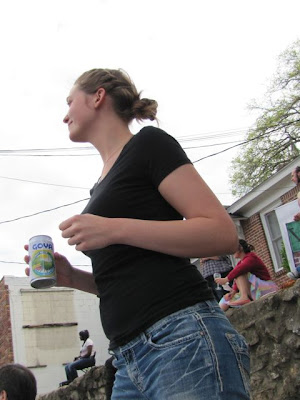 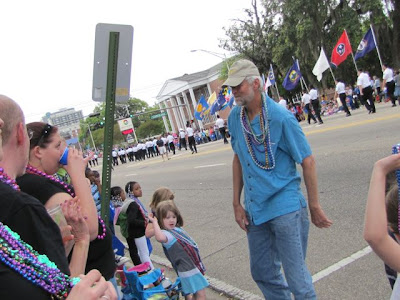 Guys on the float that got the biggest cheer from our little corner of the street. 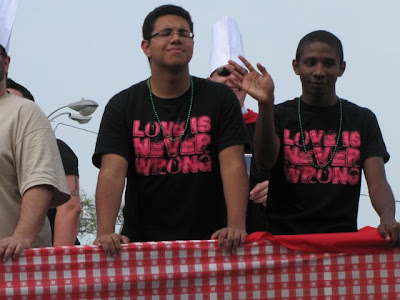 And the whole group. 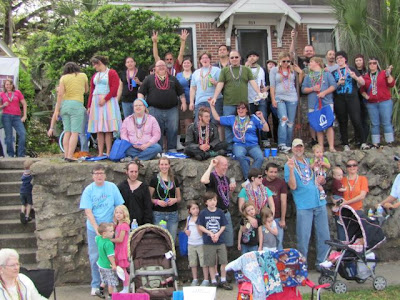 Hank calls this party "the float that doesn't move." There's even a banner. 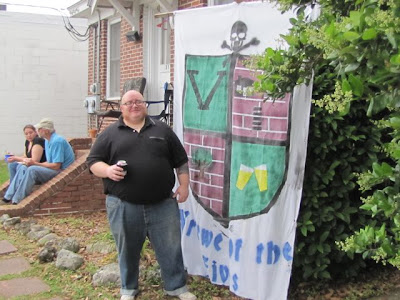 Yeah. It was a great party.

I wish you could have been there. You'd have fit right in. I just know it.

Much love from Springtime Tallahassee. Okay, actually, Lloyd at this point.