A Different Sort Of A Monday Night 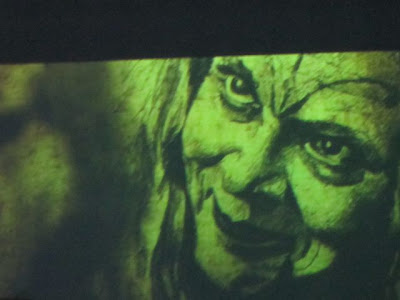 Haha! That's me!
Or, actually, I suppose a digitalized version of my face- whatever. It's so scary, isn't it?
And here's the funny thing- I am a person who cringes at a photo of herself. Can't stand to see herself in a picture.
But. Shit.
Freddy can do whatever he wants to with my face and I'm all just "Oh, that's so cool. Happy, happy, happy."

We went to see some of Freddy's films in a classroom at FSU yesterday evening, Mr. Moon and I, and it was fun. That boy- he can take a camera and one mic on a boom and a few actors and an idea and TA-DA! a film! And he may only be twenty-four years old (he was twenty-three when I started working with him) but he has some sort of magic in him. Some of his films are sweet, some are scary, some are thought-provoking.
It wasn't long after he made the film Disconnected (on my side bar, if you're interested) about the government using the "kill-switch" on all communications that his native country- Egypt- did just that.
Anyway, it was a fun thing to do, to sit and watch myself and others on a bigger screen. Marcy and Fred were there, and people I'd been in some of the films with.

And when it was over, we decided to go down to the Rusty Bucket and see my son Hank do one of his Trivia Nights there and Marcy and Fred came too and we got Chinese, and Marcy and Fred got a pizza and we sat in the bar and played trivia and ate our yummy take-out foods and it was such a different way to spend a week night (or any night for that matter) and fun, too.

And the world didn't come to an end, even though I did leave Lloyd and that's a good lesson, right there.

One of the films we saw was a shortish one called As I Am, which is where the picture above came from and he just finished editing it and I'll post it here when he gets it up on Youtube. That one was mostly shot on the coldest day of the year and I'll never forget how it actually snowed and how freezing we were all day long and how much fun it was.
I think that's the thing about being in Freddy's films. It's just so much damn fun.
And being one of the interesting faces in some of them is just a joy. I am so grateful to that boy for allowing me to be a part of his work.
Last night I hugged him and whispered to him, "You're a genius, Freddy," and I meant it.
Maybe that's why I don't care what I look like in his films (and in half of them, I don't even wear any make-up at all, none) and also because he gets such talented people to act for him and to be a part of that is just something I never knew I could do, never expected I would experience.

If you want to check out some of his older work and some of his newer too, go to his Youtube channel.

And if you want to have a good time on a Monday night playing Trivia, head down to the Rusty Bucket in the K-Mart shopping center. There's a Chinese place on one side and a pizza place on the other.

I recommend the Buddha's Delight and a draft Yuengling.

Take a pen and a group of friends.

All right. Owen's coming any moment. More philosophizing, sermonizing, recipes and gardening adventures to follow as the week progresses, I'm sure.