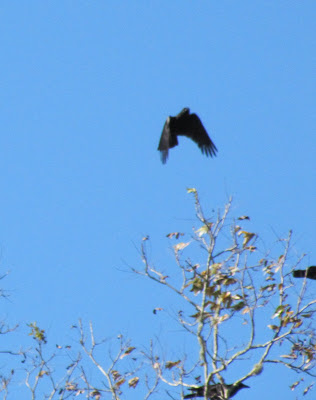 Yes. Crows. Here are a few I caught. If I had been quicker, I could have caught a hundred in that tree. I am not very fast right now. As Truvy says, I am built for comfort, not for speed.

Another day of lying on the couch. I have watched more movies in the past few days than I have watched in a year. Don't even ask me what I watched. One with Alec Baldwin, one with Seth Rogen playing three different roles. All right, the movies were Lymelife and one was Fanboys. There were two Culkin boys in Lymelife and they were both good and let me just say this- if you want to hire a young actor to play a child observing the break-up and misery of a family with the greatest skill and power, look for actors whose last name is Culkin.

I have watched other movies, too, but I drowsed through huge parts of them. I watched part of one called The Brothers Bloom and I want to see the whole thing. I could watch Adrien Brody all day long doing nothing but reading a phone book. Silently. To himself. That nose. That face.
Ah me.
I do love a good nose. I always have. And I have always wondered why they were put squarely in the front of the face. They must really, really be important to our survival as a species. And although we don't really think or talk about it, they must say something important in the silent language of attraction too.
Well, that's my theory.
And there's a woman in The Bloom Brothers called Bang-Bang (Rinko Kikuchi- what a name!) and I love her too. It'll be on again sooner or later. I'll see the whole thing.

So I got up off the couch and made turkey soup. It has turkey, of course, in it and collards and celery and onions and garlic and curry and chili powder and edamame beans and oh, I don't know what all. Leftover gravy. One sweet potato. Rice. The rest of the wine leftover from Wednesday night. I hope it's edible. And I made some Irish Soda Bread but it doesn't have enough flour in it and it's the shortest loaf of Irish Soda Bread you've ever seen.
Oh well.

Today I saw and heard flocks of crows. It's been slow and quiet. And I wanted to show you one of the things I did to decorate the house on Wednesday night: 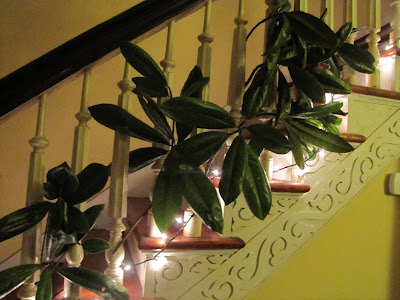 Magnolia branches twined in the stairway. I think we'll be keeping this up the entire holiday season. It makes me happy and when those branches die, I'll just replace them. I wonder if any one at the party noticed. I sort of doubt it. And if they did, I doubt they realized that the branches were real.
I did.
And that's okay.

And I remembered something tonight- dancing may have contributed to my knee problem but it was dancing that cured my foot-tendon problem back in January. So there.
Dancing IS prayer.

Remember that. Do a little shuffle, a quick-step, a polka, a waltz, a slide, a down-and-dirty boogie. In the moonlight or kitchen or living room. It'll do something to change your life.

That's the advice coming to you tonight from the Church of the Batshit Crazy.