I Find These Things To Be Self-Evident 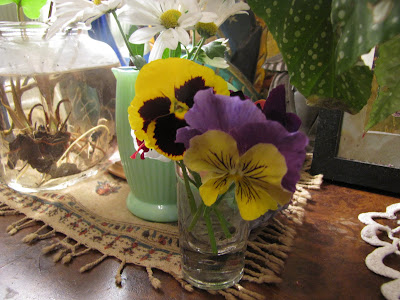 I was listening to Run by Ann Patchett and in the book there is an old priest who is dying and as the end of his life approaches, he does not lose his faith in his god whom he feels even in the stiffness of his knees, but he does not any longer believe in an afterlife of glory.
He decides that life itself has been the glory and what more could there be?

I often wonder about the stories believers claim to take as truths. Stories that even children can't really believe and constantly question. One of the main ones for me concerns the afterlife and how we are promised that we will be with our loved ones forever and ever and so forth.
The Mormon faith is pretty much based on this, I think. Many religions hold it as a tenant above all others.
And yet- I have to wonder- why would anyone believe this? Why would anyone want to?
What of the man who has been married six times or well, the woman, for that matter? Who will Elizabeth Taylor spend eternity with? Richard Burton, perhaps, but what about the woman he married after he divorced Elizabeth and what of all her many husbands? Will they all hanging out together, enjoying the glory?
What of relatives we didn't like so much when they were alive? Are we expected to be their friends in heaven? Will all things be made perfect, including relationships? Don't ask me to sit down with my stepfather. There is not enough perfection in this universe.
Well, according to most religions, he'd be in hell anyway but I probably will be too if any of this crap is right. I don't believe that Jesus Christ was born and died for me and my sins.
My sins are my own, thank-you.

None of this makes any sense to me at all. Nor does it to anyone who really thinks. I do believe that a lot of very intelligent people believe in an afterlife, believe in some deferred joy. But really- does it make anyone who truly loves someone who dies feel better to think that they are now in the arms of Jesus?
What long arms Jesus must have.

No. None of the supernatural for me.
Look at those pansies. That is as much supernatural as I can stand. They bloom throughout the winter, their faces to the sun, they are as soft to the touch as they are sweet to the eye and they can be eaten, too.

Look at a baby. And not just the baby, perfect in form and shape, whatever form and shape that takes, but look at the way evolution has set it up so that we fall in love immediately with that child with such power that we would literally throw ourselves in front of a bullet for him or her. That this same feeling happens when a grandchild is born. That it would appear that mothers of other species feel the same. Squirrels and osprey, mice and wolves, even spiders race to their eggs when danger presents itself.

This is glory. This is miracle. This is just how it is.

I could go on forever. You know I could. I could not list all the many things which make this life a glory, ever. Even the painful ones must be in that list. Childbirth and giving something up and having to learn change and losing our footing, our minds, our hearts and then finding them again. Sometimes we find them again. Sometimes things are gone forever.

It's all part of this life and that's all we can count on. There may be something after but no one has ever been able to come back with certainty to tell us about it.

This. This is it. Tonight's leftovers are as important as the last supper. They are the holy communion of sustenance. This tea I am drinking is the blood of a leaf, for everything we eat or drink, something has died, whether a plant or an animal. To an anti-abortion person, the idea that a nut is an unborn nut tree must enter their mind as they eat pecan pie. We have to have death to live. So yes, even death is a part of this glory, probably more important than we can ever realize. Things are being sacrificed so that we may live every moment.
It sometimes seems to me that these truths are so obvious and so worthy of remembering that religions were built around them and given added glitter and changed into something altogether different. This is how religions came about.
Like the sacred cows of India which were worshipped for the meat and milk they gave and so, made icons which could not be used for those purposes.
They were made super-natural, no longer merely natural, because the nature of them was so amazing, so useful.
Which did no one any good at all. Except for the cows. That I admit.

Well. I don't really know. This is just another one of those paths my mind goes down sometimes. Those pansies and that priest in the book made me think about it all and it came together in my mind and I wrote it down. Nothing new here. I am no great thinker or philosopher or anything at all. Just a woman, a wife, a mother, a grandmother.

But it gives me the willies when someone tells me that Jesus died for my sins, just as it makes me heartsick when someone says that soldiers are dying for my freedom. I don't think that's always true. I do not. And neither do you, probably.

We need a reason to believe that suffering has a purpose, whether a soldier's or a crucified man.
A good reason, a noble reason.

I'd rather believe that suffering just happens. It is part of the whole. And that pansies are too. I can't explain either. I don't have to. They are self-evident.

Which is what I base my beliefs on, as tenuous as they are.