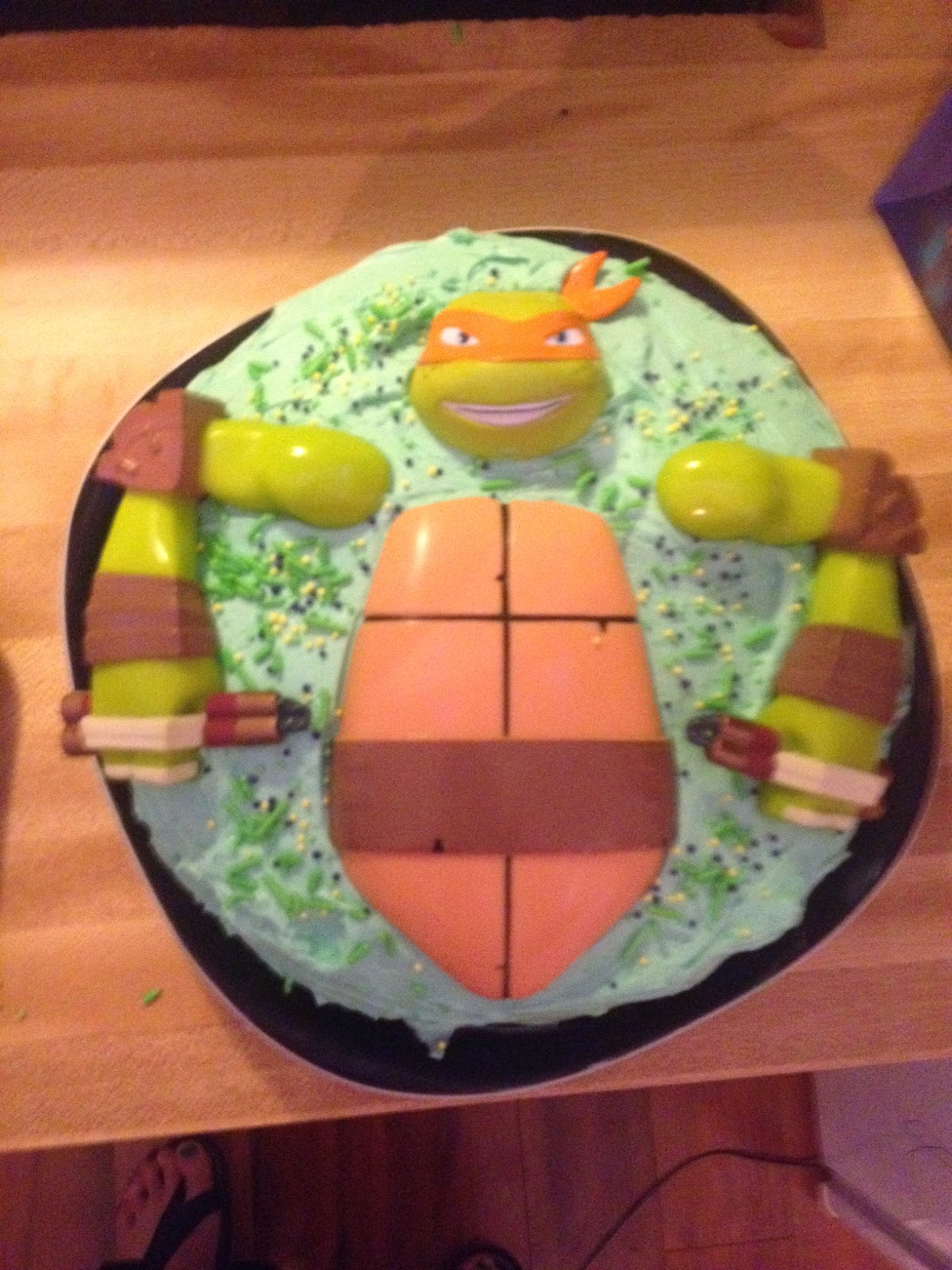 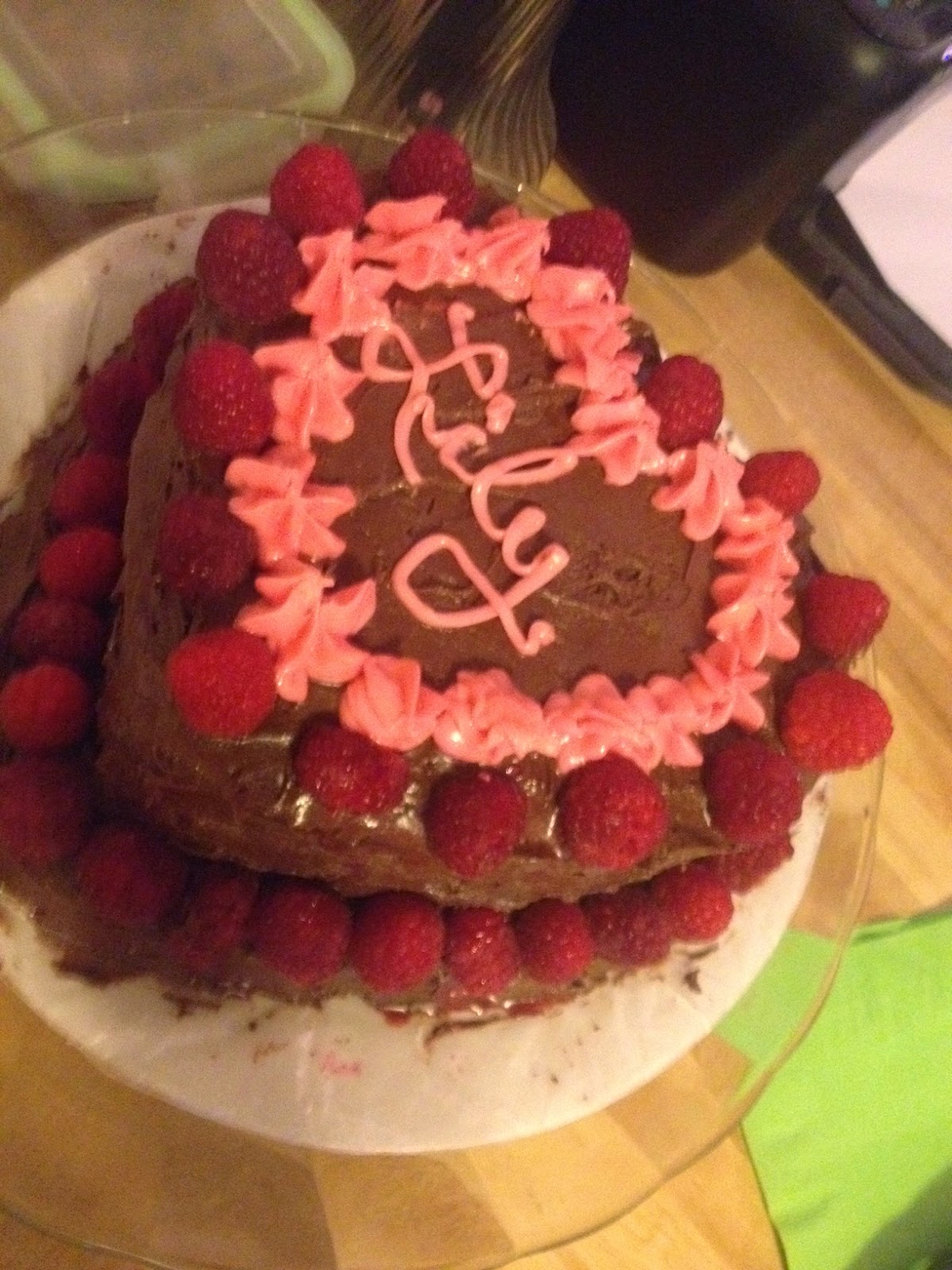 Vegan chocolate and raspberry. I am proud of that cake. I actually SIFTED the dry ingredients, y'all! It was delicious. I got the recipe HERE.
I did not make the ganache icing but a buttercream instead which was nothing more than Earth Balance margarine, almond milk, cocoa powder and vanilla.
Also, the recipe calls for sunflower oil and coconut milk but I used coconut oil and almond milk instead. I also froze the layers before I iced them to prevent crumbling and that worked out very well.
Whatever. It was a very good cake and not just "good for a vegan cake." It is not one bit healthier than a regular chocolate cake but if you or someone you're baking for is vegan or has dairy or egg issues, this would be a good one to make. Hell, it would be a good one to make if you just want a really good chocolate cake.

Owen was very brave during the Happy Birthday song. We sang it to him and to his mother and maybe that helped. 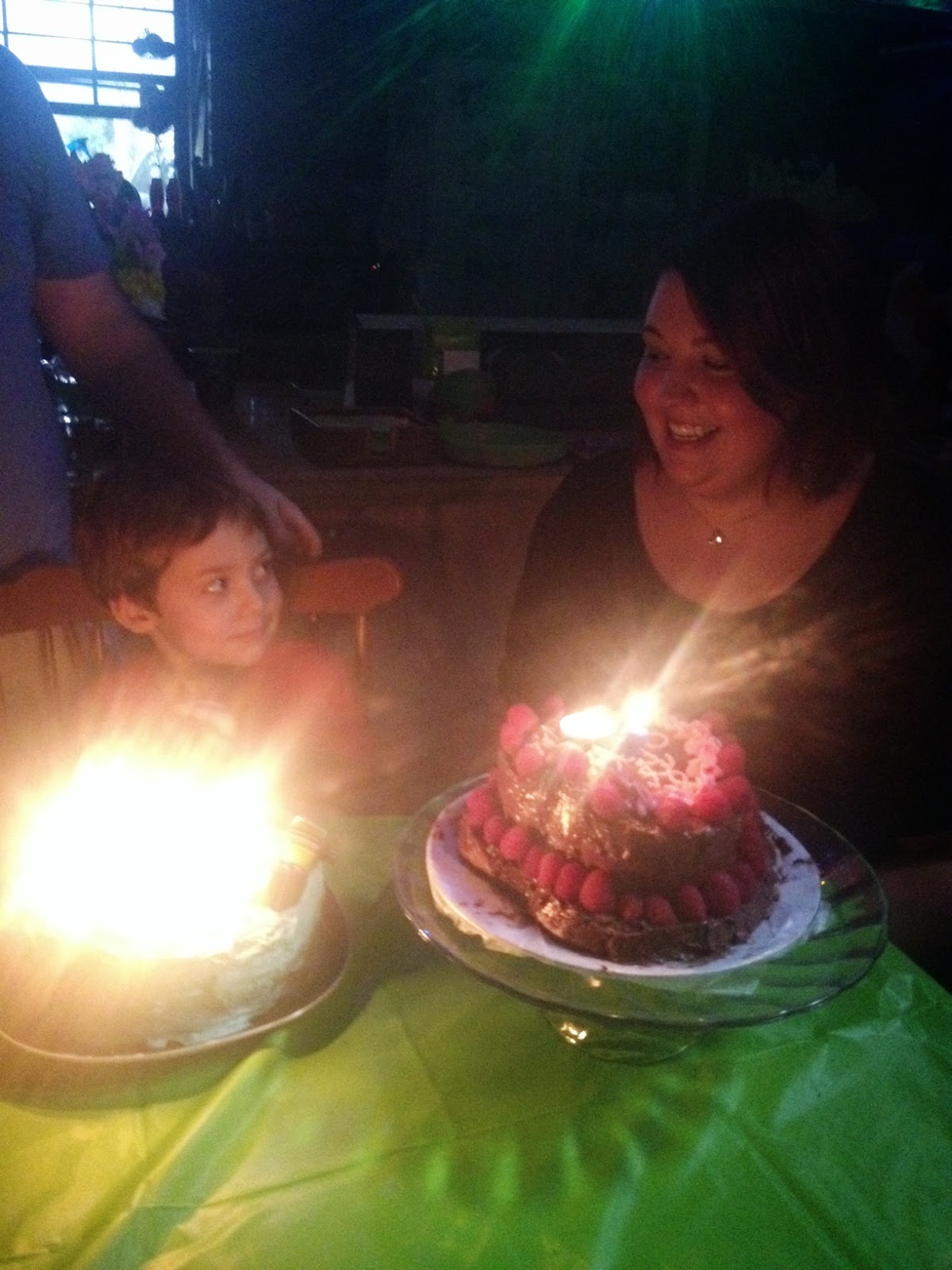 They blew out their candles together and made wishes and if Owen wished for a whole bunch of cool presents, his wish came true. I got this shot when he opened Hank's present which was a full-sized pirate flag. 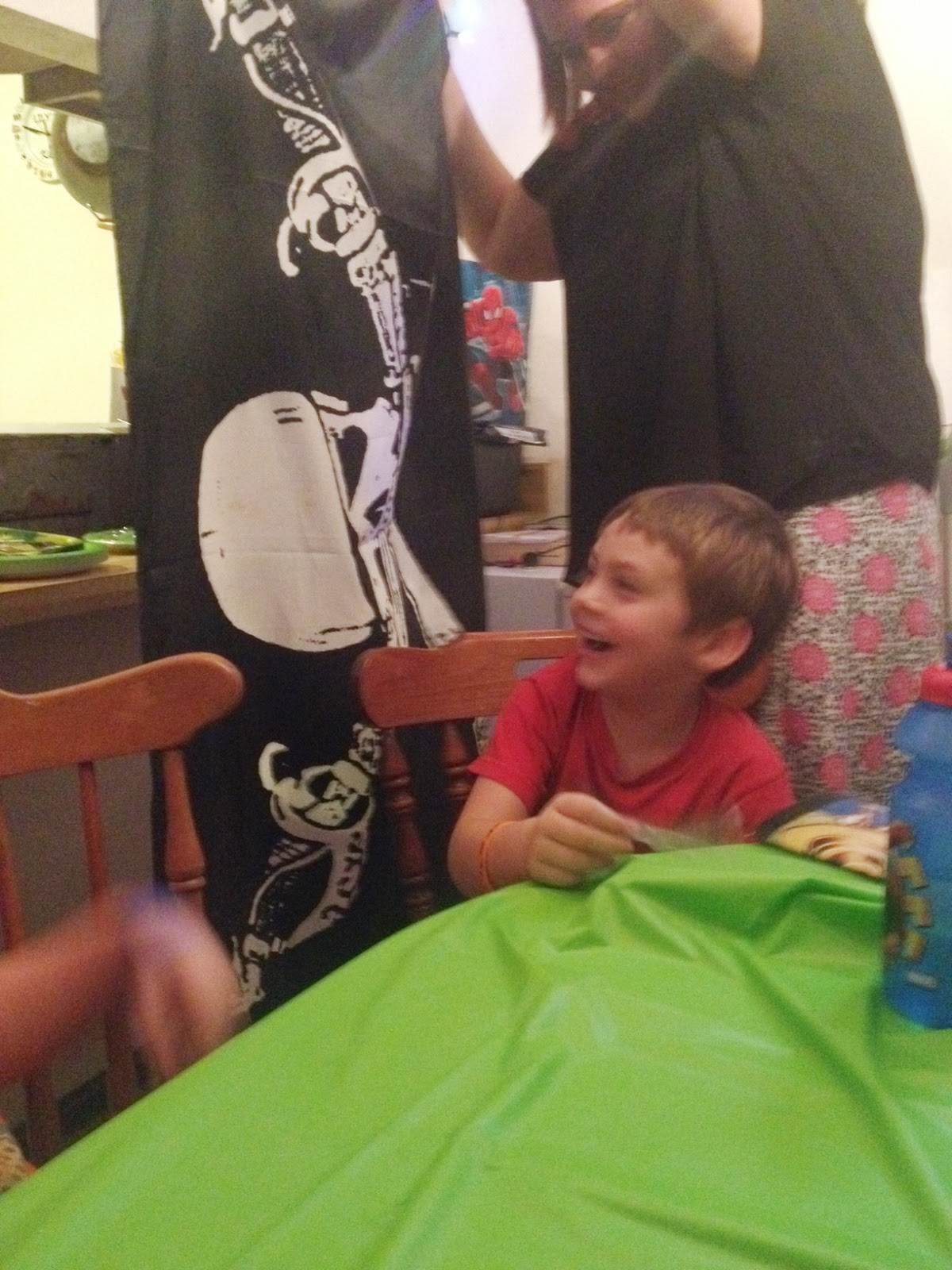 He was even gracious about receiving a book- "Gus And Me"- because he knew how much it means to me. He is a precious boy.

Gibson liked his little present too and he and his Boppy played with it together. I would tell you what it was but I have no idea what that creature is. Lily told me he would like it. And he did.

So yes, it was a good party. May and Michael were there and Hank and Grandma, who is Jason's mama, and Aunt Kelly and Uncle Brandon (family by choice), and Shayla and Waylon (who is growing like a weed- my god, those legs!), and some other dear friends and also Mark and maybe that was the best treat of all, to see Mark who has recently returned from Belarus where he got some major surgery and oh my Lord, but it was so good to be able to hug him, have him call me "Mama" again. He looks good. He is his funny, brave self, and I think the next party may be for him after Jessie and Vergil move back. He wants me to make ham and shrimp salad and greens and BREAD! And I will.

So it was all good and I got to talk to a lot of people whom I love and haven't seen for awhile and for once, I got to talk to May when she wasn't being my server OR cooking my dinner. It just all felt really, really good and I was happy to be reunited with my husband again too and we smooched a little on the couch. I forgot to take the candles and the traditional little girl candle holders for Lily's cake but it was inevitable that I would forget something. I left them right there on the counter where I KNEW I would see them and remember them but of course I didn't. Right before I left, my neighbor came over to borrow some yeast and I'd blame that but shitfire- let's face it- I would have forgotten them anyway. At least I remembered the presents and pizzas.
Sigh.

So it was a good day and now we are home, cozy and well and it looks like we're going to get a lot of rain tomorrow and I so hope that Mr. Moon can get the garden tilled before that happens. I am in a fever to plant my greens.

Here's what I look like tonight. Without my glasses. Yes. I am wearing overalls. I did not wear them to the party but wore a skirt and a shirt that when I wore it once before, Owen told me I looked beautiful. Tonight he told me that he didn't like it so much and that he liked my black shirts better.

Ah well. You can't please everyone all the time.