We're home, safe and sound, everything put away, laundry going, boat washed, cat reassured.
She obviously missed us and no, I would not consider taking a cat on a boat trip across a bay to an island where she'd probably freak out, run away and I'd never see her again.
She doesn't seem to be sure though, how to express her feelings about our abandonment. One second she's trying to cuddle me and the next second she's grabbing my wrist with all claws extended and appears to want to gnaw my hand off with her sharp little teeth.
Ah well, she is my little cat buddy and I need a small and mostly undemanding friend when Mr. Moon is out of town and he is out of town a fair amount, especially during hunting season. As Hank and I agree, one MUST have an animal in the house when one is alone because if you hear a sound in the house at night, you can simply say to yourself, "Oh, it's just the cat" (or dog or ferret or whatever you have, although hopefully not an escaped pet python) and you can turn over and go back to sleep.
In theory, of course.
But it's good to have another creature around whose needs must be considered. Something to talk to, to stroke (if allowed), to laugh at.
I do, at least.
I remember how much my mother yearned for a pet in her later, more lonely years. She was very allergic to cats and couldn't have one of those and she did try adopting a small dog at one point but the reality of having to walk it and deal with it was more than she wanted and so she took it back to the shelter. "I just want another living creature around," she said. And I understand that.
I do too.
And it would seem that I am not happy unless I have something small and soft to nurture occasionally. Cats are somewhat ideal here as "occasionally" they do allow us to nurture them but of course, only on their own terms.
The chickens are great but they go to bed in their own houses at night and so are not fit company after the sun goes down.
Speaking of which, Miss Missy is still sitting on her imaginary eggs. I hope she snaps out of this before she starves to death.

So on the way home today, Mr. Moon and I stopped at a small and very popular seafood restaurant in Panacea as we so often do on our way back from the island and I think we had a bit of an epiphany while we were there. The place was packed- Sunday after church, after fishing, after...whatever, and the server ladies were running like crazy and the kitchen there is always a little slow but the prices are great and the food is usually terrific if you like fresh, fried seafood and also delicious yummy fried vegetables like squash and okra, and so you expect a wait and that's okay. But today it was just startling how many people there were really overweight and unhealthy looking. People far younger than us who needed canes to walk with because their legs just couldn't take their weight. I felt positively sylph-like in that way you feel as if you have attained model-thinness immediately after giving birth, only to discover a day later that you still look eight months pregnant.
But I digress.
As we waited for our meals I observed all of this and especially one very unhappy looking old woman (and when I say "old" I really don't know her exact number of years, but she looked old) who methodically and without any seeming joy or enjoyment went through an entire basket of crackers, eating them one after another after she delicately smeared each bite with garlic butter.
And then her food arrived and of course, it was all fried and of course, half the plate was french fries and well, it was just sad.
And then our meals arrived. 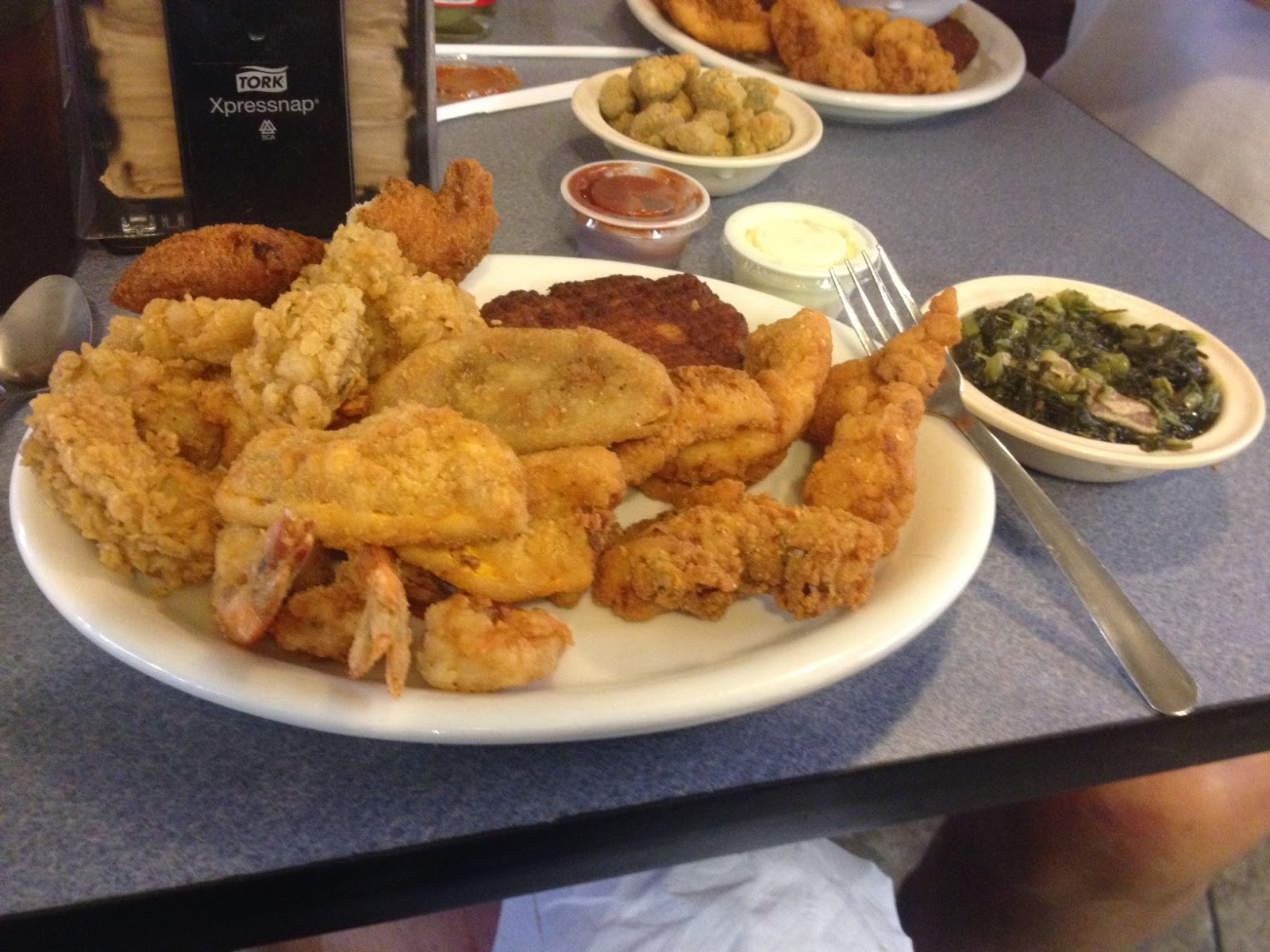 Here's mine. And keep in mind- this is the smaller, "senior" seafood platter. Grouper, shrimp, crab cake, oysters, and scallops. With greens and yes, fried squash. And hushpuppies. Because of course!
We don't usually eat like this. I never fry food unless it's fresh mullet and that happens about once every three years but like I said, we do stop at this one restaurant and just go for it but today, when the server set that plate in front of me, I was completely overwhelmed. I didn't know where to start. I took a bite of the greens and they were delicious but cooked with plenty o' pork fat (another thing I never do but which I do appreciate when I eat it) and then took a bite of crab cake and a bite of a hushpuppy and then some grouper but...it just all tasted not terrific. The seafood was fresh, it wasn't that. It just all tasted so fried. And hey- I ordered it that way!
Neither Mr. Moon nor I ate half our meals. We brought the rest home, crammed together in a large to-go box and by the time we got home, we both realized that our stomachs were NOT happy and that we don't need to do that anymore and the chickens got the rest of all that lovely seafood.
I heard no complaints from them but if they start pecking at the door asking for Pepcid AC and Pepto Bismol, I won't be surprised.
And this is not a lecture. This is nowhere near a sermon. This is just the way it was for us today. Forever I have loved that special North Florida brand of fried ocean goodness and certainly allowed myself to eat it now and then but today it just wasn't what I really wanted.
And when I gave Maurice a few scallops, she carefully removed the fried batter from them before she ate them which I think is something to think about. I mean...she eats frogs.

And so it goes. Live and learn or live and don't learn and I probably haven't learned my lesson and will again someday order at least fried oysters but for now, I've just had enough.

One more thing- Joan Rivers.
I'm sorry she died but I'm glad she got to go out quick. I doubt she ever regained consciousness after she went into cardiac and respiratory failure. She often said she did not want to live if she couldn't do a ninety minute show (forget a sixty minute show- she had to do the full ninety) and the last comedy special I saw of her on HBO, she most certainly could. She ran up and down the stage, she rolled on the floor, she owned it.
But the time had to come, and soon, when she would no longer be able to do that. And say what you will about her mouth and her plastic surgery and her politics- the woman had BALLS! She had balls when women weren't supposed to have balls and in fact, women comedians who have balls are always and still vilified but FUCK THAT SHIT!
She was Joan Rivers and no one else was.

I feel most sorry for her grandson because I think she adored that kid and I think he adored her.

The world needs people who speak truth to power whether that power is a president or a king or a damn movie star who obviously hasn't got anyone around her who will look at what she plans to wear on the red carpet and scream with horror and tell her, "NO, NO, NO! YOU CANNOT WEAR THAT SCRAP OF TRASH! IT MAKES YOU LOOK LIKE A LAS VEGAS BAG LADY!"
(The Emperor's New Clothes, anyone?)

Well, that's my opinion. I tell you what- I wish I did believe in heaven because if I did, I would be so happy to envision Joan and Robin and St. Richard Pryor all cracking each other up. And Phyllis Diller too, whom I could not abide but still- she was another woman with balls and a great big mouth and I love her for that. 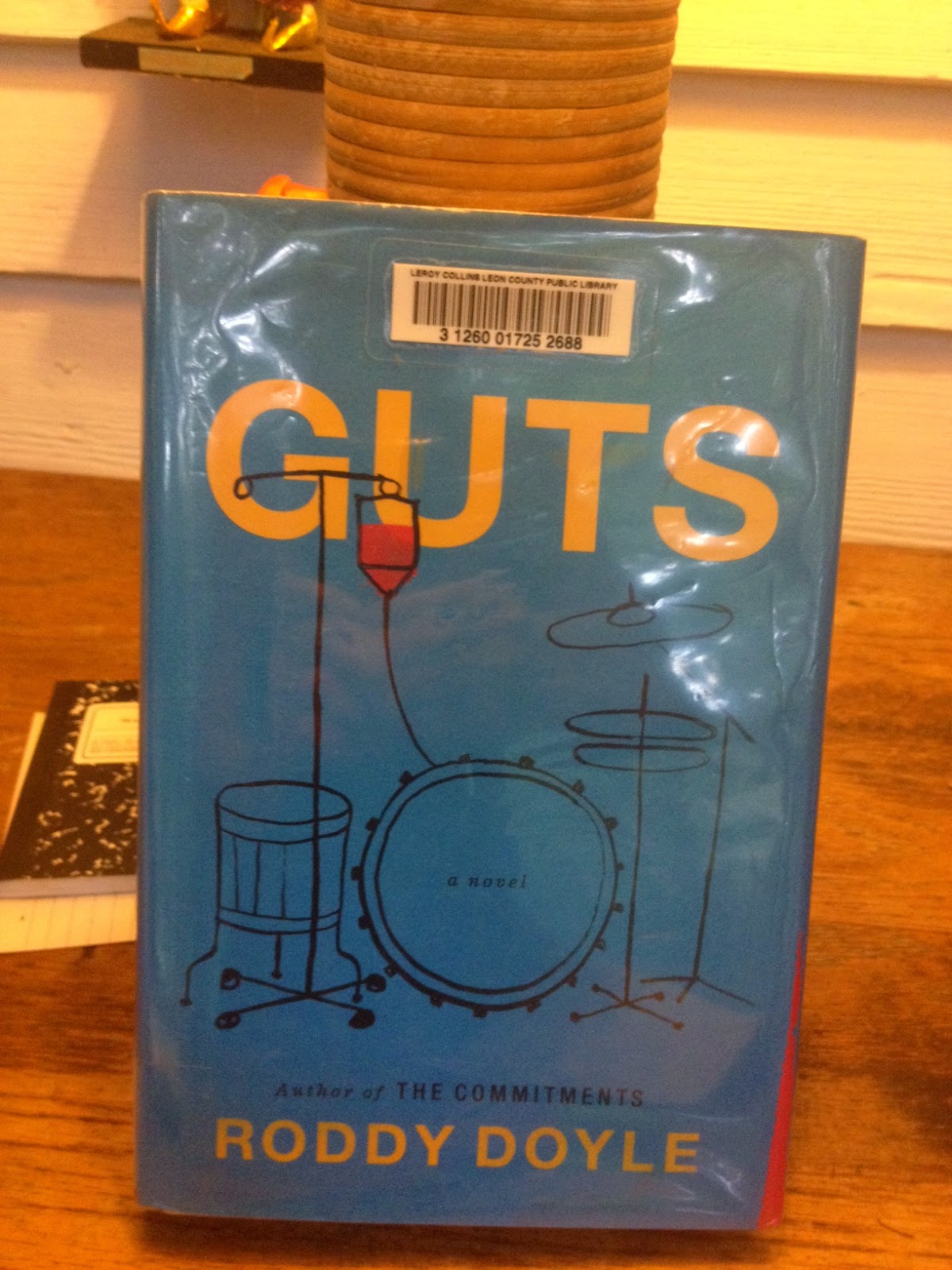 I finished it yesterday on the island and I loved it and I want to go back and read, re-read all his other books. I highly recommend although of course, you might hate it.

This is the way life is.

Or a combination thereof.