As Always, It Is Love 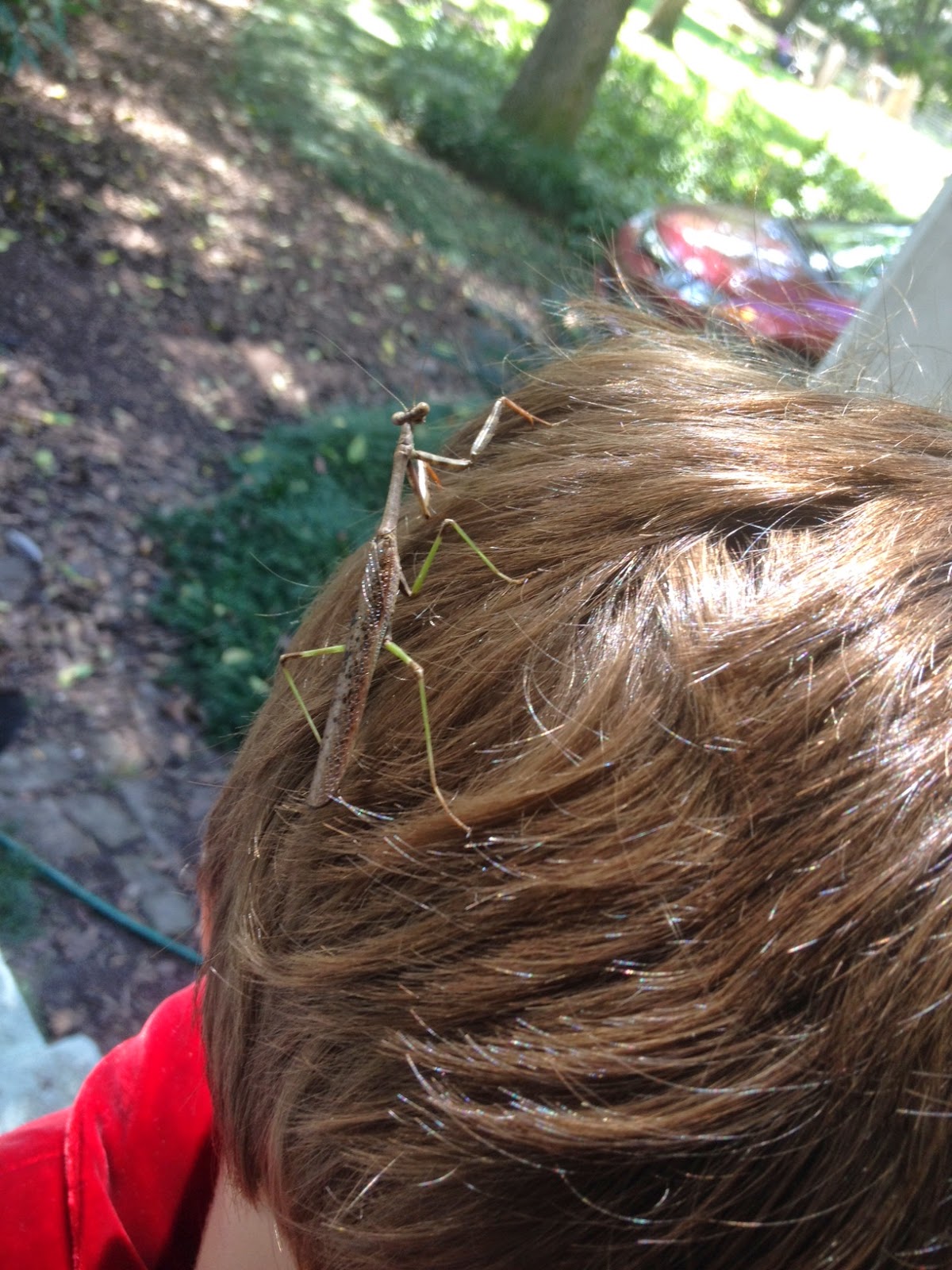 This is, I think, a stick bug on Owen's head. I am no entomologist. That would be Kathleen. Anyway, we found the insect in the kitchen and we took him outside, as we do. First though, he climbed onto Owen's sleeve and Owen was wearing the red velvet shirt and both the sleeve and the bug shone with iridescence. What had looked to be a dull brown bug proved in the sun to be a shining pewter, wearing a tiny suit of armor. I tried to get a shot of that but the poor bug had its own ideas and climbed the sleeve to the head. The chickens were clustered about so I carried it a ways off and put it on the wisteria vine. I do not know if chickens eat stick bugs (if indeed it was a stick bug) but I was taking no chances as we had already anthropomorphized this creature into an almost-pet.

We did the things we do and Owen was Tarzan and we played the game where I pretend I can feel someone watching me but I don't know who it is and then finally, I discover that it is Tarzan, up in the tower on the play set. Tarzan gave me a clue today, dropping his gum so that I would see it.
"Where did this gum come from?" I asked, gazing big-eyed into the sky. "I know someone is watching me."
Where he came up with this scenario is beyond me but it is one of his favorites.

I dragged their cardboard box house out onto the porch and cut new windows in it and they played in that for a good while. 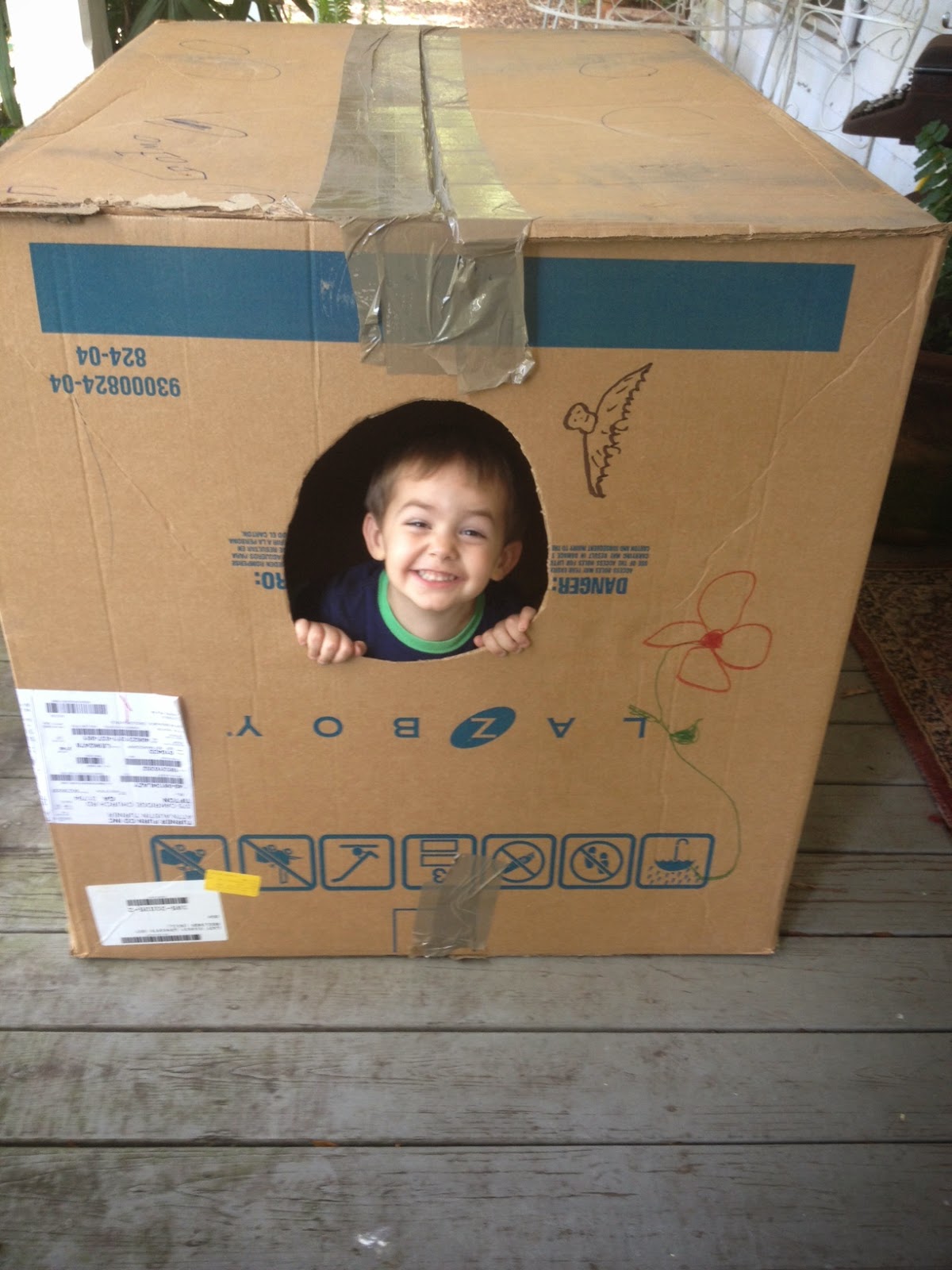 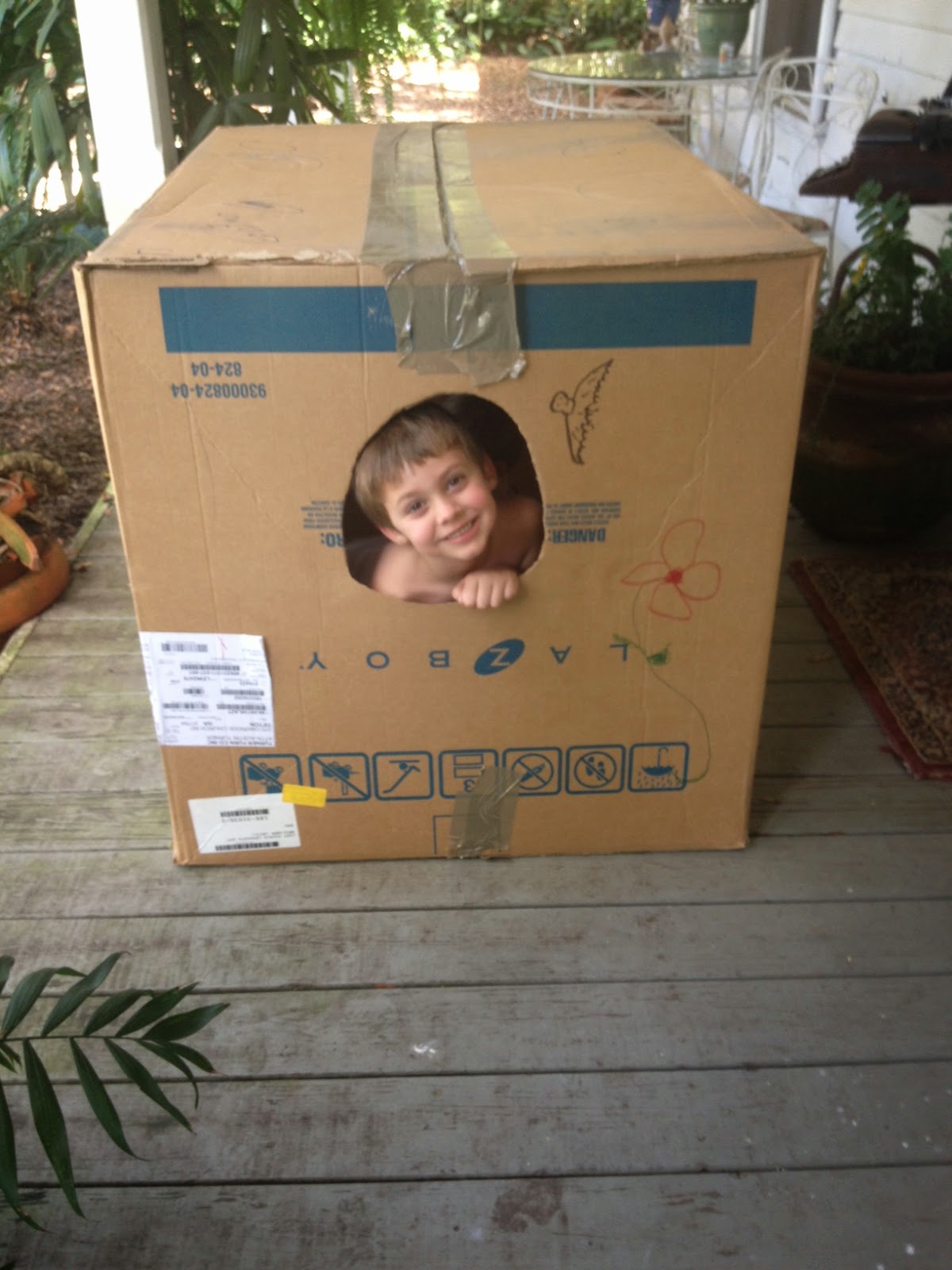 Of course they took the pieces of cardboard I'd cut out and proceeded to do battle with them. They had hot chocolate and orange juice and edamame beans and grapes and Gibson painted and we read books and they got to see Boppy when he came home to get ready to leave for auction. They spilled juice and Owen fell off the trapeze and pretended he had a head injury, letting his eyes drift back and forth but I knew he was faking. We wiped the dirt off and all was well. We dug up a beautiful bottle from the driveway, old enough to have had a cork stopper rather than a screw top but unfortunately it was cracked, the bottom coming up in a separate piece. Gibson took a thirty-minute shower, playing in the water and when I finally forced him out and wrapped him in a towel, his eyelashes, so improbably long were beaded with water and his little bow mouth was so pink and I said, "Why are you so beautiful?" and he just laughed.
They are so loving. They are so beautiful. And they are such boys.
Owen swatted my butt when I leaned over to pick up Gibson once and then he joked that he was going to whip my "axe." "Really?" I asked. You're going to whip my axe?"
"Yes!" he said, and giggled his way into the house.
He told me that Miss Deena, his teacher, calls him O-Dub. He informed me with great delight that because Friday is his birthday, he is going to "skip school" and they are going to Wild Adventures and they are going to spend the night in a motel! And did I want to come?
"Oh, I think I'll let your parents take you," I told him. "I will come to your party."
And of course I will. That is on Saturday which is also Lily's birthday.

They are gone now, gone home with their papa and I have tidied up the house and have brown rice cooking for my supper. I will cook spinach and poached eggs. Before they left, as we were doing the ritual good-byes with them in their car seats, Owen shouted, "One more!" and pursed his lips and I leaned in for one more and we hugged with great affection.
"I love you!" I yelled at Gibson.
"I love you too!" he shouted back.
"Thank you for raising such loving boys," I told Jason. He wears a button-down shirt and a tie to work now and he looks so handsome. "That doesn't happen by accident," I said.
And it doesn't.

No matter what melancholy may fall upon me, no matter what despair I may feel, there is always this- my grandchildren are being raised in love and with love and the phrase, "Whip your axe," is a thing to joke about because it has never happened and probably never will.

My husband just texted me to tell me that he made it to Orlando safely. And that he loves me.
I replied that I love him too, and that I never forget that our love for each other has much to do with how loving our grandsons are. Love begets love. His parents' love for each other was always apparent and real and that is why he can love the way he does.
And so it goes.

I still have doors and windows open. The chickens are all put up. Although Missy spent most of the day off the nest, she was settled back in there again at dusk and I carried her to the hen house and she is so very, very soft and she trills and sings so sweetly in my arms. I put her gently onto the hay nest and bent and kissed her little black head.

Time to cook the spinach, time to poach the eggs.

Despite all and because of, it has been a very, very good day.