While I was walking this morning, Lily called me and she sounded horrible and she felt horrible. Up vomiting all night and running a pretty stiff fever, chills, aching. I finished my walk and went in and picked her up some ginger-ale and crackers and Emetrol and dropped those off, scooped up my Gibson and we went and retrieved Owen from school.
I got to meet Clare and she is a very pretty girl with huge eyes and lovely. She hid behind her mama's knee but she peeped around and smiled.
We drove to Lloyd and I said, "We're home," and Owen said, "This isn't my home. It's my grandparent's home."
I said, "That makes it your grandhome."
And it does, I think.

While I was fixing their lunch, Owen went out and picked me all of the hurricane lilies and I'm afraid I gave him sort of mixed messages on the gift, being a bit horrified at first and then knowing that he had no idea that would be any sort of problem at all and so I tried to cover up my shock and thanked him and put them in a vase and there they are in that picture with some of the last zinnias of the season.
How can you fuss at a boy for bringing you flowers?
When I was in high school I had a boyfriend who would do a sort of guerilla thieving of all of the roses he could find in dark yards at night and cut them and bring them to me in giant, huge bundles and bouquets. He was crazy, I was crazy in love with him, I've never seen that many roses, he bought me my first lobster dinner, he built me a tiny house in the woods with lumber and bricks he'd probably stolen from construction sites, oh, how beautiful he made me feel. How cherished. How protected and that was exactly what I needed, what I craved, what I yearned for.
As crazy as he turned out to be, I know now why I loved him and I do not chasten myself for that.
And oh, how he broke my heart later and I thought I would never, ever get over that.
I did.
But I still remember those roses, that tiny hidden house in the woods.

How in the world did I get from Owen and hurricane lilies to that boy and the roses and my broken heart? A short and crooked path, I suppose.

I showed Owen the shirt I bought at the Goodwill this week and he fell in love with it, the softness of it, the crimson velvet sheen. He wanted to wear it and I let him and I told him he looked like a pirate, like someone from Harry Potter, like Keith Richards. He wore it to swing on the rope from, he wore it to climb in the fig tree in. He was gorgeous. 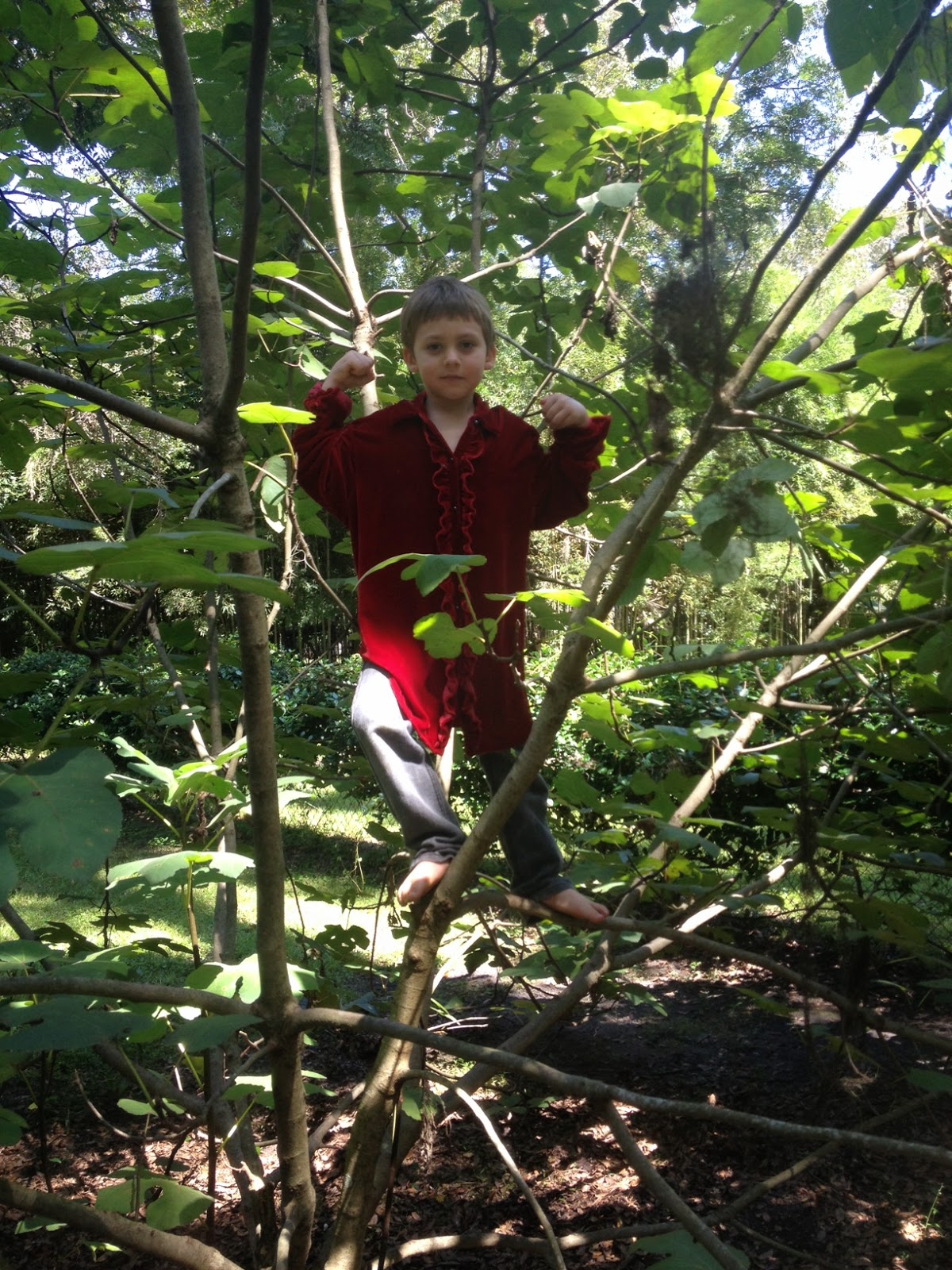 Gibson wanted to feed the dogs some dog biscuits (we still have part of a bag of them which I will send home with Jessie for Greta) and I explained to him again that Buster and Dolly are not here anymore, that they are gone. He went to look for them anyway and when he couldn't find them, he munched some of the dog bones himself. He also shared two muffins with the chickens but he didn't feed Maurice anything. He rode his tricycle around in a circle from porch to hallway to dining room, to bedroom, back to porch, over and over again. We played on the bed, kissing games and feet games and silly games and I read him the Hand, Hand, Finger Thumb book for the one millionth time and part of another book that when I do the sad voices he pulls my face towards him and says, "Stop crying, Mer," and I say, "I'm not crying," in my most cheerful voice and then I go back to doing the voices and he has to tell me again. He has been carrying a little metal airplane around for about a week now and Lily says that when he wakes up at night he says, "Where my plane?" and she has to find it for him before he'll go back to sleep. I told Owen the other day that I was surprised Gibson hadn't scratched him with that plane yet and tonight, after they went home, Owen called to inform me that now Gibson HAS scratched him with it but he sounded fairly cheerful about it. He just wanted to tell me.

Jessie thinks she got the job and she is off having supper with friends and will be leaving either tomorrow or Saturday and Mr. Moon is heading up to Georgia to the hunt camp tomorrow for the weekend and I wrote a friend today that I feel like the unmoving center of a universe that swirls around me and she wrote me back that yes, I probably am and that it's okay and a beautiful thing and I should accept that and it made me get a bit teary.

We're all swirling, no matter what, in the planetary sense, at least. It is a fine thing to be a center. Someone has to maintain the grandhome. Someone has to be here for when the comets and stars and suns and moons need a place to rest.

I do not mind being that. Sometimes I think I have held myself back so much and sometimes I think that yes, this is who I am and I have always wanted not much more than a home and flowers and someone to love me and for me to love and that is exactly what I have with the addition of so much more and Miss Butterscotch is sleeping out again tonight and may she be safe and well, and all of us too.