Ugh. Sunday to the max.
Gray, drippy, and I'm still trying to escape the dreamscape that held me this morning in its horrible embrace. I feel like this. I swear to god.
Either I'm insane or the drug I take to help me not be insane are giving me insane dreams.
Whatever is going on, I am starting to be afraid to go to bed which is about the worst thing imaginable for someone whose self-professed hobby and greatest pleasure is sleep.

Well. Mr. Moon is tilling the garden. He brought me the very last of the zinnias before he pulled them. They are small and pale but they still have some beauty to give. 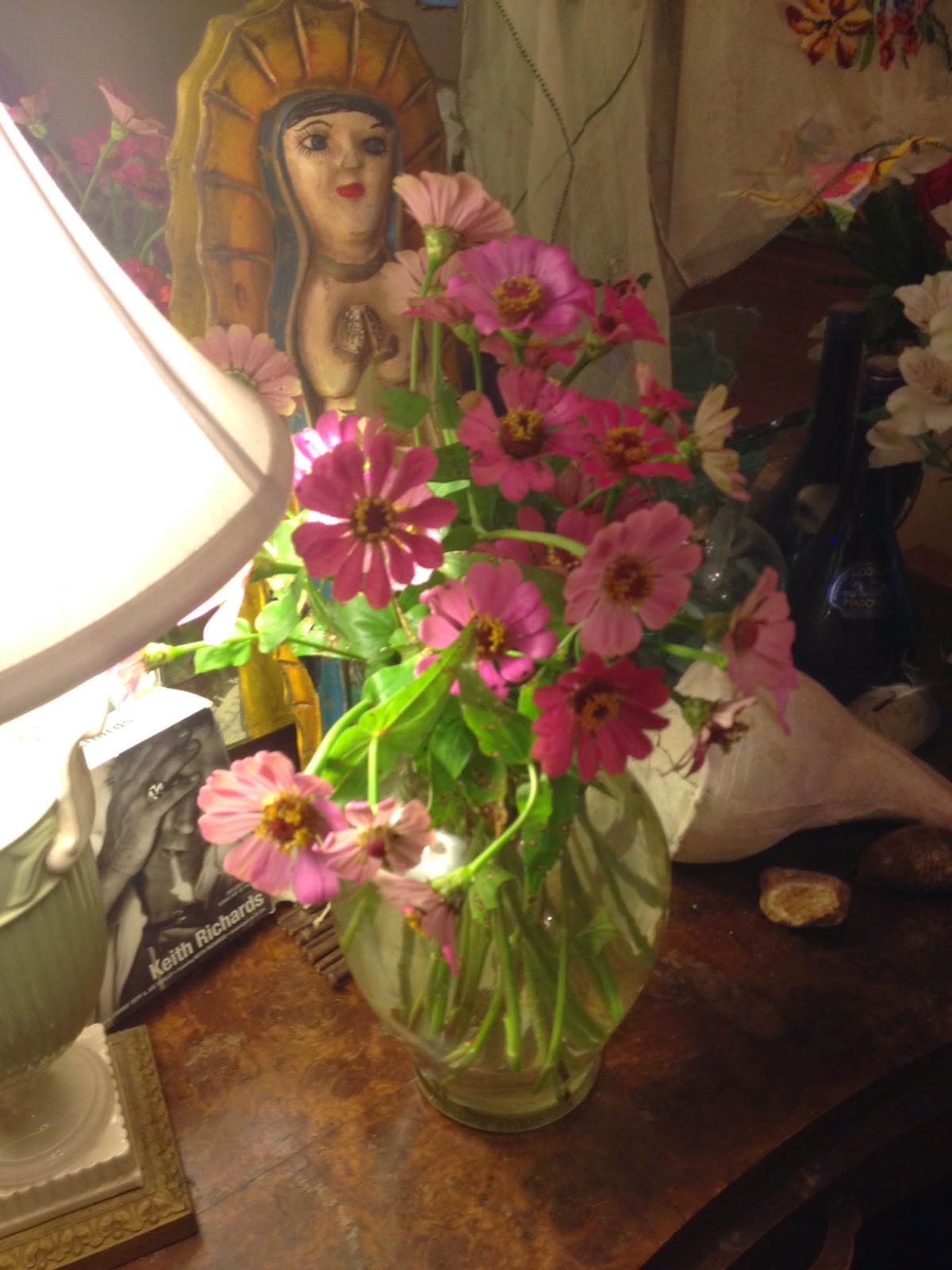 I was talking to Ms. Sarcastic Bastard Beloved yesterday and we were discussing, as we so often do, our shared experiences with depression and so forth and she said, "I know this time of year is really hard for you. Especially with the holidays coming up."
It is no secret how much I detest Christmas. How the happiest Christmas I've had in decades (or maybe ever, actually) was the one we spent in Cozumel.
"Can you go away this year?" Ms. Bastard Beloved asked. "Maybe somewhere closer to home, but still away?"
Brilliant woman, that one.
I spoke to Mr. Moon about it last night. We talked about renting a place on St. George Island for the holiday week. That way we could have time to ourselves and the children could also come down and visit when they had the time and inclination. He said, "That would be fine with me."
I felt a great whoosh of stress fall off of me.
My children are quite aware of how I feel. And it has nothing to do with them. It has to do with many other things, most of which I fancy myself aware of, quite aware of, in fact, and the knowledge does nothing to eliminate the feelings.
I will work to make this going-away a reality.

And so it goes. I feel half-crazy, half-relieved. The chickens have been fussing all morning, Miss Chi-Cha wanting on the nest that her sister occupied, "Hurry up! Hurry up! Hurry up!" and Miss Lucille was near the woods, shouting out something which indicated she was not pleased with whatever it was going on there which made her sister, Miss Butterscotch, agitated and chattery too. Elvis was calling to all of them from across the yard, "Settle down, now. Simmer down, ladies!" but they were ignoring him. As they so often do.

I think I'll go clean out the hen house. Maybe later I'll go to town and buy seeds and plants to get the fall garden started. Shit and dirt therapy.