In Which I Leave Lloyd And Then Come Home

Well, today had its ups and its downs.
I sure did enjoy going to the doctor with Jessie to get August all checked out. He weighs 11 pounds and 6 oz now and he's twenty-three inches long but Jessie and I personally do not believe that the nurse really got his true length. Anyway, he did fine and gurgled and smiled and chatted with everyone and was called "adorable" and I told the doctor to write GENIUS on front of his chart because obviously, he is.
It was not fun watching him get his vaccinations. Now, this doctor does not force them on anyone. He sat and chatted with Jessie and August for quite awhile about any problems or concerns, about his temperament, his eating and peeing and pooping habits and then he asked what Jessie was planning on as to immunizations. Jessie, who has educated herself on this matter, had a few questions and the sweet doctor answered them and they came to a very reasonable agreement and so August got two today. The way they give babies their shots at this office is to bring in three nurses. One to hold feet and two to give the injections at the same exact time so that the baby does not have to suffer the sting but once. And Jessie held his little hands. He did cry. Oh! That look! As if...You have betrayed me!
"Put him on the breast!" the nurses said, and Jessie did and he quit crying after about twenty seconds.
Jessie just this minute posted a picture from our adventure on Facebook and here it is.

Now that is a happy, healthy two-month old baby. And he sure does make his old Mer happy.

As you may recall, I have not been exceptionally, uh, satisfied, with my own medical practitioner for awhile and I've been planning for a long time to change over to this office where August is now a patient, where Owen and Gibson and Lily and Jason are patients and where Jessie is about to become one too. It's a cheerful, down to earth place and they see patients of all ages. There are several nurse practitioners whom I hear are very, very good and it just seemed like a smart thing to do and so I asked them at the desk when we were checking out about that possibility.
And guess what? It turns out that they are not taking any new patients over the age of thirty.
Fuck me. I almost cried.
"But!" I pointed out to them, "You'll be done with us old people so much sooner!"
They neither found that exceptionally valid nor funny.
I'm still not over it and have no idea what to do. Lis keeps trying to get me to become the patient of their beloved doctor friend in St. Augustine but that's sort of a long drive. Like, three hours.
I know the man, though, and he'd be worth it.
Still. Doesn't seem prudent. Or practical.

But we went to lunch after the appointment and met up with Hank and Lily and Gibson. Gibson is starting to really want to interact with August more. When we were sitting at lunch, Gibson told me to "hug baby August!"
And after lunch, Gibson started talking to him which cracked August up and they had a good little time. 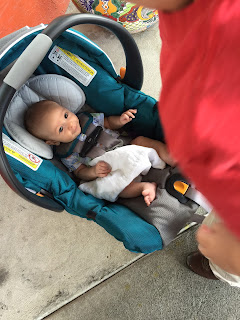 I have long been aware of the fact that babies adore children and August is no exception.
Plus, Gibson is pretty cute to look at. 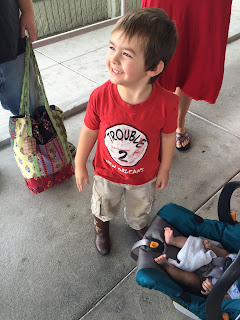 I went to the Publix because I was out of potatoes and onions and I don't know about you but I can't keep house with no potatoes or onions in it. I can't make a meal without an onion. I mean- it's just not possible. Garlic is the same but my friend Tom grows garlic and keeps me stocked up on that.

I took the trash and recycle when I got home and someone had left a fine fat pumpkin on top of the place where people leave stuff that others may want. I brought it home for my chickens and hacked it up and put it by the coop. It was too late in the evening for them to have any interest in it tonight but I think they will tomorrow. Someone else was a little curious about it. 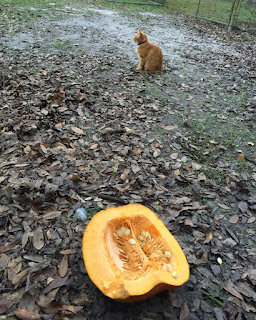 Before I took this picture, she went right up to one of the pieces and sniffed it and looked at it closely and then backed away slowly. Then she kept her distance. Maurice obviously does not trust a pumpkin.

How many of y'all remember this picture? 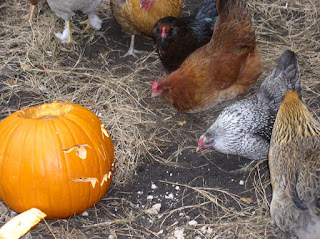 That was from years and years ago. Still one of my favorites.

Let me say again how much I appreciate all of your recent comments and support. I do feel freed to talk about the hard things now in a way I hadn't before. As I said recently, I feel no need to protect anyone any more and there is no shame in writing about it for me. I did nothing wrong. No child of any sort of abuse did anything wrong. The wrong was done to them and shame is just one of the methods that the abusers use to keep the child silent.
I am sixty-one years old and by god- if my talking about all of this helps any person on this earth, I have done my job.

All right. Signing off now.