We Shall Not Perish For Lack Of Apple Butter 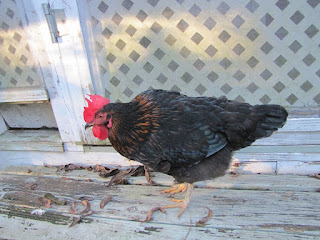 There's my beautiful old Trixie. She hasn't laid an egg since late last spring but she still sings a most beautiful song as she goes about her day. I would like her to live forever, just so I can hear her voice which is a constant pleasure in my life.

On Friday while I was outside, I realized that I could smell the tea olives again. I went and checked and sure enough, their tiny blossoms were out. 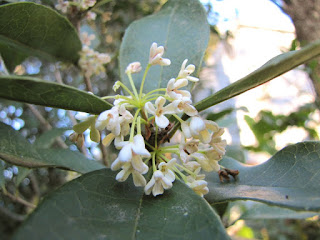 May and Michael were here and I asked them, "How often does a tea olive bloom?"
No one knew.
I looked it up and one source says they can bloom several times a year. I'm here to say that is true. Their scent is so strong and so spicy sweet that you can smell it all over the yard.
Speaking of scent, my house does indeed smell like apples and cinnamon. I am not sure that my entire day's labor and a whole bunch of sugar has added up to anything fit to eat. I canned a few quarts of apple slices in cinnamon sugar syrup for pies but they may not be any damn good. I started the apple butter in the crock pot but soon became impatient and now the sugared and spiced pulp is in a regular pot on the stove, simmering its little heart out. I do not have a food mill and if I do, I don't know where it is so I processed the soft chopped apples in the food processor and to tell you the truth, the texture of the goop is now more like applesauce than apple butter but I refuse to do it all again. Okay. Maybe I'll put it through the blender. I am about to get tired of this project although I have enjoyed it and have been listening to an audio version of a John Grisham novel and don't you judge me. I love it. "Sycamore Row." The narrator is fine and does accents and voices well. Grisham has a rare grasp for the southern characters and the racism and dynamics that can be seen in any small southern town. This book is set in 1987 when things were even worse than they are today. At least in some ways. I don't know. But I do know that Mr. Grisham is good with twists and turns, with characters and plot. It's like watching a good movie in my mind for hours at a time while I chop and simmer and measure and boil and sterilize and wipe up the kitchen over and over again. My floors are sticky and I just redid the goop in the blender and NOW it looks like apple butter and I have no real idea how long I need to cook it and I don't have nearly enough jars sterilized for this batch and this could go on all night.
Oh well.
Remember when blogs used to do contests? Perhaps I should do a win-a-pint-of-apple-butter contest. Or maybe a gallon.
Haha!
Mr. Moon took an entire truckload of crap to the dump today and that makes me feel better. He said that if he did ten more just like it, the garage would be pretty nicely cleared out.
One step at a time.
And so this day has been like that. The temperature is dropping and before too long I'll have to bring all the plants in and somehow, they've gotten away from me this year. Where will we put them all? Why are so many of them so huge and in such heavy, heavy pots? Dear Lord. Why do I love to root plants and make more of them as much as I do?
I guess it's because my ovaries no longer function or something like that.
I am grateful that I have soup to heat up for tonight's supper and I am grateful that I have a dishwasher. It is on its second run of the day and I'll probably be able to fill it again before bed.

Bed. Wonder what I'll dream of tonight?
Please let it not involve dysentery. I feel certain I covered that one pretty well last night.