My mood tempered today to fit more appropriately with the bluesky fall day and did I ever tell you that when I was a young hippie mama I knew a baby boy named Noah Bluesky?
I still like that name.
Some hippies got pretty out there with the names and there were plenty of Rains and Rivers and so forth and I knew one couple that decided not to name their child but to let him grow up and name himself. So he was called "Bumpy" for the longest time until he chose his name and he chose Michael which I find pretty amusing but also cool.
I stuck with more traditional names for my own children. Even though I totally believed in peace, love, and understanding, I was quite aware that names should be considered carefully. I had seen the confusion and turmoil that my brother's name had caused. He'd been named for his great grandfather, White Burkett Miller, although he did not get the Burkett, but Alexander instead, for my mother's father. At one point, my brother decided that he no longer wanted to be "White" but Jim and lo, it was done but then even later, he decided that White was a fine name and he has gone by it ever since. Still, I will never forget being a small, small child telling people, "No, it's not Dwight. It's White. Like the color. W-H-I-T-E."
White was the first word I ever spelled. And I've been a little bossy, prissy know-it-all ever since.

But. That is not what I came here to talk about.

I have no idea what I came here to talk about. We just said goodbye to the boys who left with their dad to go to a school activity and fund raising night at Chuck E. Cheese and I told Jason that if I had to, I would pay a thousand dollars not to go to Chuck E. Cheese tonight and that poor man was at work at 6 a.m. and didn't get off until after five and now he has to go to Chuck E. Cheese with two little boys?
He is going to heaven, that Jason.
The boys were wild today. I have no idea why but they were. May and Michael stopped by for a little while because May's car had been at the repair shop right around the corner and it was just Bonus Round glory to see them. The boys were thrilled too and Owen made Michael talk to him about video games and when they left he said, "I sure enjoyed talking about video games with you, Michael!" and then, when they didn't leave right away he said, "Weren't you guys about to leave?"
I gave Michael a quart mason jar of venison vegetable soup to take with him, wrapped up in a dish towel because it was boiling hot, right out of the pot.
The big pot.
The giant pot.
Lord. Will I ever learn to cook an appropriate amount?
Probably not.
I loved making that soup and it took me all day. I put the kale and mustard greens from the garden in it just a few minutes ago and besides those, it has everything from cabbage to sweet potatoes to white potatoes to green beans to corn to tomatoes to...
Everything.
In it.

Bread is rising.
It is Friday night. A martini is involved. They are singing at the church next door.
One of the truly good memories I have as a child was when on Friday nights my mother would take White and me to Vero Beach to shop at the A&P for the week's groceries and after that, we'd go to the Royal Castle for supper and we'd eat those tiny burgers and drink root beers and play the juke box from the flip-menus on the counter. Sort of like this. 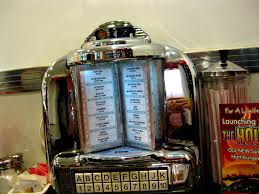 Somehow, through the magic of The Beatles, I knew about their songs and we would listen to "I Want To Hold Your Hand" and "Eight Days A Week."

My brother, who was probably about six years old at the time, could eat three Royal Castle burgers, french fries, AND a fried pie. His appetite then was prodigious and it still is. And yet, he is not now nor ever has been fat.
Where did THAT metabolism come from?
Well, life ain't fair.


Or maybe it is. I didn't get the metabolism but I sure did get the music.
Which saved my life over and over again.

Bread's in the oven. Soup's ready whenever.

Keith's still alive although Saint John and Saint George are not. 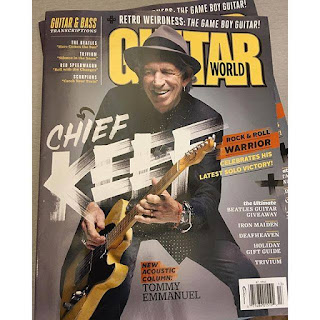