Doctor, Doctor, Give Me The News

Okay. Things turned out okay. I went to the Computer Doctor. That is the name of the business. It's sort of a hole-in-the-wall place and you have to sign in via a computer which had an actual mouse which I haven't used in yonks so I felt sort of slow and stupid but the guys that work there are so nice. All colors and nationalities of young men and and one of them had a man-bun with the rest of his hair cut short and I have to say I like that look. Sure, it would have been even cooler if some of the people working there had been women but it was what it was and it was okay. The guy took my phone and said to come back in an hour so I left, thinking I'd call Hank and Jessie to see if they wanted to meet for lunch but of course I had no phone so I went to lunch by myself and I ordered a shrimp salad sandwich and when I got it and bit into it it was a chicken salad sandwich but what the fuck? I put some hot sauce on it and it was pretty tasty. The guy who served it to me came by and said, "I think I gave you the wrong sandwich," and I said, "Yeah, that's okay."
And it was.
And instead of staring at my stupid phone the whole time I was eating, I read an article in the New Yorker which was far more satisfying and yes, easier than reading the article online. So there.

I went back to the Computer Doctor and the tech guy told me that nothing he could figure out would fix the camera but that for half of what the insurance company wants to replace the phone with a refurb, they could install a new camera in it for me.
Okay!
Of course, they didn't have the camera and will have to order it but that's fine with me and if that doesn't fix it, they aren't going to charge me and they didn't charge me for what they did today.
I left, loving those guys.

Then I got a text from Jessie and met her at the Target and we had a good time although August slept through most of it and I didn't even get to hold him. But I did get to see him and touch his soft face which is so soft that you're not even sure if your finger is actually touching anything although you know it is. Jessie returned some stuff and I bought some vitamins and that was fun and then I went to the New Leaf to get some Dr. Kracker crackers because I am a little bit addicted to them. 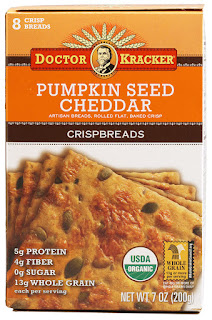 Have you ever eaten any of these things? They are just downright delicious in my book. I also bought a little thing of goat cheese because I am listening to a book, sort of a memoir, by a woman living in Provence and she's always going on about the food and it's got me wanting lentils and smelly cheese and figs and all sorts of lovely vegetables and herbs and okay, not so much the rabbit.
Listening to the book I am half thinking that I should be living in Provence. I mean- going to the market and spending hours cooking and eating every day sounds like my idea of paradise for sure but then she talks about how all of the French woman wear heels even when they're pregnant and never go anywhere without wearing their eyeliner and mascara and are skinny and I realize that no, they would not allow me to even enter the country of France, much less live there. Plus, I know about two words of French, one of them being "merde" which means shit, the other being "oui" which means yes. I think.
So. Let go of that dream but I did pick some more of my tiny greens this evening to make a salad for tonight. With olive oil, of course, and possibly some goat cheese. I'd cook some lentils but the author adds creme fraich and lots of olive oil to hers and I don't have any creme fraich so what's the point?

I got home to see that the temperature on the kitchen porch was 92 damn degrees. This is insane. Not one of the Bradford pear trees' leaves has changed color yet.
And yet...I just looked outside in the glooming to see my first blooming camellia, a white beauty that I went out and plucked. 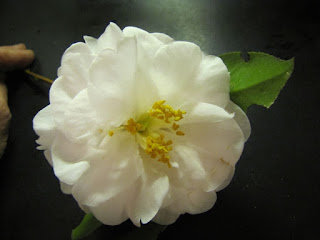 Camellias blooming before the Bradford pear leaves turn red and yellow and fall from the trees?

As I may have said once or twice before, I do not know shit but what I do know is that camellias are incredibly beautiful, no matter when they bloom and that I am grateful as hell that our planet still allows us to grow them and that I live in a place where they thrive.