Don't Even Get Me Started 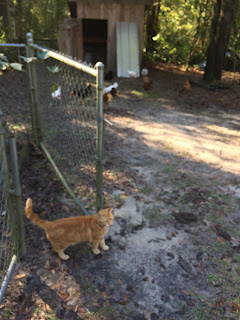 Another blurry picture and so you know what that means- the new camera did not fix the problem so it was a software problem so I came home and wiped my phone back to factory settings and then restored it and it was still messed up but in a sort of different way so this morning I gave up and asked Mr. Moon if he could call the insurance company which I had struggled with mightily with no results for days and days and in a few hours, it was done and I'll get a new phone on Monday.

Why didn't I just ask him to handle it to begin with? Mr. Moon could make a fortune dealing with other people's problems like this. He's amazing. He manages to get a human on the line with a human heart and a human brain and he ends up with positive results. Plus, well, I've seen him bargain successfully at WALMART!
I don't understand it but I am in awe of it. He's never seen a bill that he thought was unfair that he couldn't get at least partially discounted. And we all know that billing errors are made every day, all of the time, but I think most of us just figure that it's too much of a hassle to try and deal with it and so we just grumble and bitch and pay the bill.
Not that man.
And he does it so sweetly.

So anyway, THAT is taken care of and now I just have to figure out how to transfer my old phone stuff to a new phone and I have done that before and hopefully, I'll be able to do it again but there are no guarantees. Yes, I still remember the words to the songs I sang in the first grade but do not ask me what I had for dinner two days ago.
Thank god for the internet which knows all, tells all, and I hear that Vergil was able to butcher his deer himself with the aid of Youtube videos on the subject.

So I finished reading this book last night. I had never read a graphic novel before but I can't recommend this one highly enough. It rang so true with some of my experiences with my mother that it was creepy. 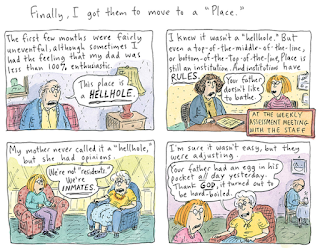 She covers it all- the dread, the guilt, the incredible amount of time and energy it all takes to care for aging parents and hell, I didn't even do that much. Ms. Chast had her own childhood issues with her parents to deal with as all of us do which adds even more density and crap to the jungle of it all and frankly, I don't know how anyone's machete is sharp enough to deal with it.
AND MY KIDS ARE GOING TO HAVE TO DEAL WITH IT TOO!
God. Just let me die quick.

Well, on that cheery note, let me say that it's a beautiful day here today and I had a walk and I'm going to make soup and the boys are coming over later for just a little while and the guy next door is chainsawing again (he CAN'T have that much more to cut, can he?) and I've already found four beautiful eggs this morning and despite feeling that the world is reaching new levels of insanity every second and not seeing anything on the horizon to change that unless aliens arrive and force us into better behavior or Jesus comes back and manages to avoid being killed by someone who thinks he's a Muslim terrorist, I guess I'll make it for one more day.