What Color Is Your Sky Today? 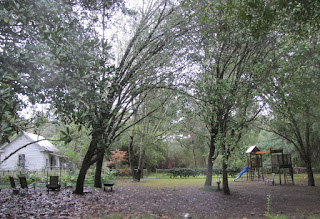 It's gray as fuck this morning and rumbling thunder to the south and raining off and on.
The chickens, bless their hearts, do not seem to care a bit.

Yesterday Mick jumped on Mabel right on the back porch steps and Owen, who'd been sitting at the table with me, got up and opened the door to view the deed and said, "Mick! Stop that!" He even tried to gently bat Mick off the hen and I said, "Oh honey, he's just doing what roosters do. Let him be."
"Do you think it hurts the hen?" he asked me.
"No," I said. Then I thought about it. "Well, maybe a little but it doesn't last long."
Life on the farm. Or, farm-lite.
Mr. Moon reported that later on Mick was hanging around them in the back yard and he asked the rooster, "What do you want, Mick?"
And Owen said, "Probably to fertilize another hen."
Oh boy.

A friend has asked me to lunch and so I'll be going to town for that in a while. I can't believe I still have a friend who would ask me for lunch but I'm glad I do. My phone camera has finally arrived so I'll go drop my phone off. I sure hope that solves the problem. I have a few other errands to run and will do those too. Lily is having Thanksgiving at her house this year but I am doing some of the cooking and need to get ingredients.

I will fuck you! says the rooster.

I will sleep, says the cat.