For My Crone Self 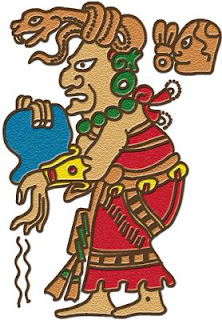 This is the Mayan goddess Ixchel and pretty much illustrates how I feel tonight. The Crone. That old Crone who is supposedly the goddess whose home was Cozumel although there's a guy now who has written a book which refutes that theory, stating that all of the early reports of this being the case were based on misinterpretation of the early Spanish explorers and that there is no basis in fact for the claim which pisses me off so bad because if there's anything I truly believe in, it is that Cozumel is sacred and by golly, I want those ruins on the island to be the temple of Ixchel, that goddess of the moon and childbirth and weaving because I've felt that when I'm there. As if there is a spirit of great importance and personal significance on the island which calls to me and has since my first visit there in 1987.
I've tried to read the guy's book but it's one paragraph in Spanish after another, each one translated into the English and fuck it- I'm going to believe that Ixchel lives there and that my journeys there are pilgrimages to visit her. The spirit to me is as real as anything and who gives a shit as to what a bunch of old Spanish explorers claimed or even what a bunch of Mayan priests claimed? Real is quite subjective and tonight I feel like the crone, snakes upon my head, the rabbit of fertility my totem, my name being (coincidence?) Moon and there you fucking go.

No matter how much a failure I feel at times, no matter how inadequate to life, I do know that in the biological sense, I have done what I have been evolutionarily programmed to do and although I have made as many mistakes as any mother on this earth, I have passed my genes on to future generations and have done the work of which I am capable of to ensure their preservation.

Meaning, I suppose, that I KEPT THOSE BOYS ALIVE THIS WEEKEND! and so, as Roseanne Barr said so many years ago, I have done my job.

After they left today, I tidied and swept and straightened and washed sheets and remade the bed. I made chili before they left, to sit on the back of the stove on the simmer mat. It is made of ground venison and the pinto beans I cooked earlier last week and onions and garlic and tomatoes and peppers and spices and yes...a big cheat...salsa. I made this while Owen was sitting at the kitchen island, playing on the iPad, first some super hero game and then a game where he dressed princesses and fed them and they would say things like, "I am so lucky to have a friend like you who feeds me all of my favorite foods!"
Oh Jesus.
Still. Kind of sweet.
I quizzed him about what all I'd put into the chili and of course, he had no idea so I listed ingredients and I'm sure the words sounded like the adult words in the Peanuts movies which is blahblahblahblahblahwonkwonkwonk.
Too bad, little man. Some part of your brain has tucked this information away and someday, you will use it and have no idea where it came from.

I wonder where my intense and visceral love of Cozumel comes from. My feelings of familiarity of all of the Yucatan. Of Mexican culture. I was born in El Paso but we moved away from there soon after I was born but can it be that even in those few months we were there I inhaled the hot breath of peppers and lime and garlic and the culture and color which blew across the border to my very cradle where I inhaled it and it became a part of my very bones?

Oh well. Who knows? Not me.
But I am going back to Cozumel in May and I am already there tonight, the membrane between this "real" life and that real life stretched so thin that I can step right through it to this. 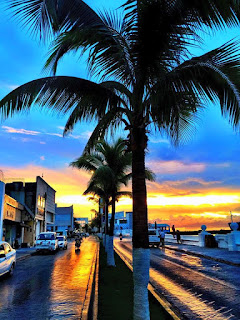 And that feels more real to me than this place on my porch and everything and anything else which is happening on this earth.

May we all have a place we can go to which is sacred to us. May our gods and our goddesses, whatever and whoever they are, bring us comfort as the world around us falls apart.

I am going to go make cornbread now.