How Would You Title This? 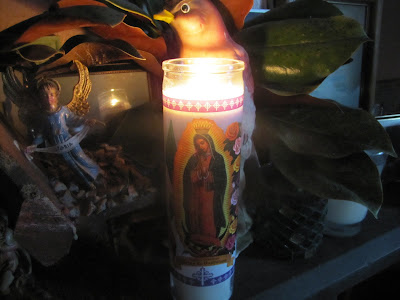 So I was reading last night, Keith's autobiography, of course, and he was talking about being on the road in the U.S. The Stones spent a LOT of time on the road in the early days and on one tour, had to take their own personal lawyer with them due to problems with Southern cops for whom arresting a Rolling Stone would have been the best thing ever, and a jewel in their crown in heaven, you know, and there was this quote about going into juke joints in Mississippi:

"Oh shit. I could've stayed here for days. You've got to pull out again, lovely black ladies squeezing you between their huge tits. You walk out and there's sweat all over you and perfume, and we all get in the car, smelling good, and the music drifts off in the background."

I wonder who his ghost writer was. Okay. I just looked it up. James Fox. Well, Fox did a great job of letting Keith's voice be the one we hear as we read. I think I am going to truly enjoy this book. A history book, of sorts, for me.
I remember when every cop out there wanted to bust a dirty hippie, put him in jail, cut his hair (and yes, they did that). Dirty hippies. Commies. Girls. Sissies. Draft dodgers. The names were endless. The whole thing so ridiculous.
You didn't have to be a Rolling Stone to be worried when a police officer was following your car. Believe me.

Anyway, those days are long ago and yet, marijuana is still illegal in most states. Isn't that just the most bizarre thing ever? I mean, really.

Here's the way Lloyd looks this morning from the road in front of my house. 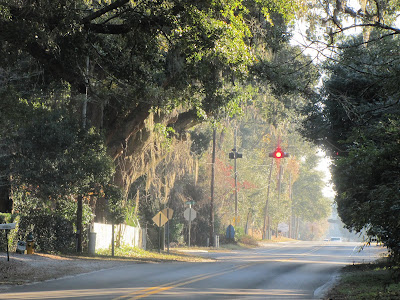 When I go to town, I can either go left and take the backroads or go right and then a left at that light to take the interstate. The interstate is faster, of course and I usually take that route. But not always. I'll probably go that way later on today, though, when I go to stay with Owen for a few hours.

I wish there were some juke joints in my neighborhood. One would think there would be. I bet there used to be. Now there are only churches and so very many of them. One after another, some right across the street from each other, small cinder-block churches with signs out front advising us on what the reason for the season is now.
I've never stepped foot in one. My loss, probably.

I've been to juke joints. I've been one of the only white faces in those dark, smokey places, and it was always a joy. I used to live on a road north of Tallahassee which was, at the time, almost entirely inhabited by black folks. Now it's high-dollar real estate and I don't even recognize it but the few times, oh, maybe fifteen years ago or more, I went back and visited the juke joint which was two doors down from where I had lived, people remembered me.

"You that hippie girl."

Yeah. That was me.

That hippie girl who lived with the guitar player with long, long hair and it was just like Keith said, "And then you'd walk in and for a moment there's almost a chill, because you're the first white people they've seen in there, and they know that the energy's too great for a few white blokes to really make that much difference."

And you know what? I've never met more gracious people.

Well. Like I said, I wish there were a few jukes around here. I'd go in of a Friday night, buy a cold, frosty Budweiser, get to know the lady who ran the place so that I, too, could get some great-smelling hugs, maybe do a little dancing, maybe just sit in a chair or stand by the bar, glad to live in the South, so grateful to live in a world where there are black faces and white, where music can bring us all together, where I could have some of the same cultural experiences as Keith Richards did.

And this post is going nowhere and everywhere, too. Here I sit and the road leads off and I could take it if I wanted to Mississippi or Alabama or New York City, even. But today I'll probably only take it to Owen's house to stay with him for a few hours. I am a grandmother but I am also that hippie girl, I am the woman who lives in this house where a candle is lit and I need to take down the Christmas decorations, put the nativity back upstairs in its box, feed the chickens, take the trash, close my eyes and see a dark, smokey room with lit neon beer signs, hear the sound of grindy bass and guitar, the deep molasses voice of someone singing his blues-truth. It's cold outside but it's warm in that room and everyone dances, even if it's such a small, contained dance that it is done with two feet firmly in one spot, only the body moving in time to the heartbeat of those blues, deep in prayer, prayer-tranced, in fact...yeah...

Thanks for the memories, Keith.
I know what you're talking about. I've never been a junkie on heroin but I've been a junkie for the music, for the smells, for the sounds, for the warmth of faces saying, "All right now, you that hippie girl."

And the music drifts after us as we drive down those dark tree-lined roads, always leading home, but able to lead us back again if we could just remember the way.
Posted by Ms. Moon at 9:21 AM