Good god, what a day.
We all got over to Jessie's and the little man had a horrible rash on his face. Now yes, newborns are famous for their rashes but this one looked pretty angry and long story short, Jessie and Vergil and August did not go to lunch with us but went to Urgent Care under the advice of their midwife and after waiting for about four hours, got a diagnosis of impetigo which seems highly bizarre to me but I ain't a doctor. Anyway, it was stressful for all concerned and I even cried, thinking of Jessie and Vergil in the Urgent Care with their newborn and of course I offered to come and be with them but Jessie thanked me and said they had it together and I knew they did but if there is such a thing as grandmother hormones, I have them and that's all there is to it.

I got home and saw that the new neighbor was out using a chain saw on bamboo. Hmmm...
I unloaded the car and went over to say howdy. He's a young man. I mean, young. Of course, I'm old so everyone under thirty looks like they're twelve years old to me. But he seems very nice and is vitally interested in nature and bees and native plants and he seems to know a lot about those things and has friends that know even more. He asked if he could use my landline and I told him he could and he came over and I showed him my house and gave him a dozen eggs and a beer and our phone number in case he has any questions. Moving to Lloyd can be daunting. You are in the country but also in a community. He seems at once a bit idealistic (but enthusiastic) and paranoid. He used that word, not me. He's from New Jersey and blames the paranoia on that. I reassured him that we have a very good community here and it is, indeed, a safe place to live. A good place to live. He wants chickens and you know I approve of that. I asked him if he would mind leaving a border of the bamboo between our houses and he said he did not mind at all.
If good fences make good neighbors, bamboo is a neighborly plant. I need to tell him how to kick the sprouts in the spring to prevent the spreading of it where he does not want it.

And so besides all of that, I have put everything away and washed the sheets and made the bed and cleaned up the kitchen and collected ALL THREE EGGS WHICH WERE LAID TODAY (someone is laying somewhere besides the proscribed areas and that's all there is to it) and it's warm and clammy again and I almost want to close the windows and put on the AC but that's stupid and it is supposed to cool down again tomorrow.

And of course, today is John Lennon's birthday and I have been thinking about him all day long.
It's so funny how, until I read Keith Richards' autobiography, I never really gave too much thought to the Stones. I mean, I loved them, they were the greatest rock and roll band of all times but the Beatles were the BEST band of all times and the Beatles were my band. Lennon was my man. When he was murdered, it sent me into a grief which I have never really recovered from. I remember those days following his death as if they were yesterday.
God. What a cliche.
And yet. I do.

I realize now that the Beatles and the Stones were necessarily the yin and the yang of it all back then. As Keith said in his book, if there was a band who had to wear the white hat, there must be a band who wore the black one.

But John was the bridge between. 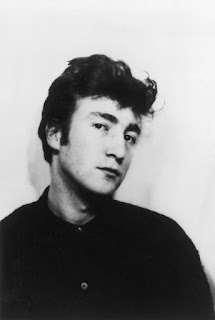 And I think that eventually the Beatles stifled him. He wasn't content to wear the white hat, to play the sweet boy. He went along with it up to a point even and up to that whole thing with the Maharishi and then he discovered the Maharishi's feet were made of clay and he fell in love with a crazy Japanese artist and he wanted to play different music and he had to bust out, break out, become a junkie, clean up, write and play songs like this.


He had to finally lay it down and cocoon in his apartment in NYC with his wife, grow up, learn to make bread, discover what it meant to be a man, and have a son with Yoko before he could pick it up again and he did and he made one of my favorite albums of all times with his wife, Double Fantasy, and then he was killed.


God saved my life and sanity.
I was not the only one.


"I don't believe in death. It's just getting out of one car and getting into another."

Seventy-five. He would have been seventy-five years old today and he's been gone from this reality for thirty years  and yet, he's as real and as present and as beloved to me as anyone could possibly be.

You ain't dead.
You're just in a different car.