I have been in the best mood today. Perhaps I should just get ten hours of sleep every night. Who knows?
Not me.
Obviously.
Anyway, I went to Costco and while I was waiting for Jessie in my car, a guy pulls up in front of me, gets out, and MY GOD! IT'S MY FRIEND RICH, WHOM I HAVEN'T SEEN IN FOREVER!
Oh, how we hugged! And we talked and we laughed and then he got to see Jessie and meet August and Rich is just the sweetest man in the world. We met when we were both in Casablanca at the Opera House and he and Kathleen and I just bonded like superglue and we went on to be in a few other plays together. It was a tonic to my soul to see him.
Just pure good.
And Jessie and I walked around the Costco and Gus was in a Moby wrap and was sweet and quiet the whole time until he woke up and decided he wanted nursing so in the middle of the breakfast cereal aisle, Jessie rearranged him so that he could get to the bosom and we proceeded with the rest of our shopping. We sampled everything that wasn't sweet. Neither of us was in the mood for sweet. I personally wished that they'd be passing out samples of angus burgers but they weren't. Dang.
You CAN'T always get what you want. The ravioli with cheese, however, was proof that you can sometimes, get what you need.
We loaded the cart up with some vegetables and some limes and beer and cheese and other stuff I can't remember and we also looked at all of the Christmas stuff because we thought it was funny and we found an artificial tree we both liked. 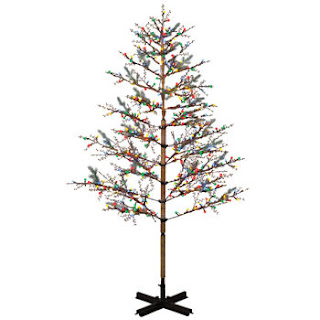 I was thinking about going to Lowe's after Costco to find some relatively cheap pots to put some rooted plants in but it was far too beautiful of a day to mess with traffic so I did not. I went to the Bad-Girls-Get-Saved-By-Jesus thrift store instead which is on my way home and I bought August a pair of shoes for when he goes camping with his mom and dad. 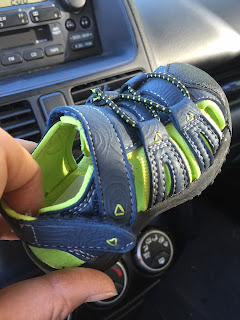 He'll look just like his daddy.
I also bought a vintage bag for three dollars with wooden handles 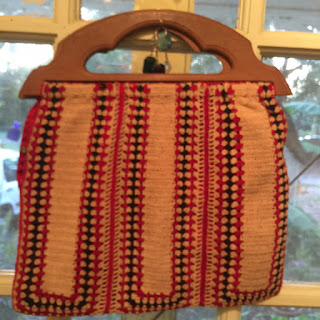 and a red satin lining I could live in. Because...look: 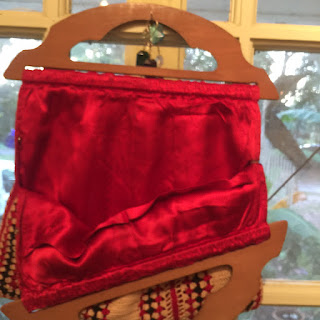 That is what I love about vintage bags. The linings. They were like fabulous lingerie, only in purses.

Okay. Speaking of lingerie, I can't find my damn Coobie bra. It has completely disappeared. I've looked everywhere and cannot find it and suspect that it may have slipped into the parallel universe where my simmer mats now reside. How can you lose a bra? Or a simmer mat for that matter?
Who knows?
Not me.

So I drove home the long way because it was such a beautiful day and when I got home I took my time and did the little things that needed doing and just enjoyed every slow thing I did from pulling up the spent Four O'Clocks in the yard to finding the day's eggs. And okay. Here's a confession: I had to text my husband to call me to help me figure out what the hell I did to the TV and remote last night and this was not the first time I've had to do this.
I am such an idiot.
He called me from a deer blind and so our conversation was whispered but he led me through the steps and I can now, in theory at least, watch TV again. I whispered to him, when our conversation started, that I'd fucked it all up so badly that I was pretty sure we'd have to buy a new TV and remote. He whisper-laughed at me.
Thirty-something years later and I can still amuse him.
I need Owen to come and live with me as my service animal. Obviously. He can now open my box at the post office, gather the eggs, turn on the garden sprinklers, and take my arm and lead me in the dark. I am night-blind. He is not. Plus, he does make-overs. And I'm pretty sure he could deal with the remote.

Here is a picture of that boy and his brother at the local pumpkin patch: 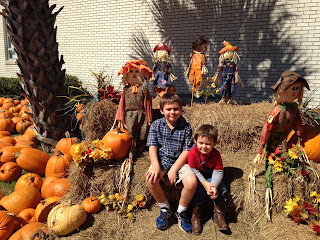 Lily sent it to me. I love it. Aren't they growing up so fast? Stop it, boys! I can't deal with this growing up stuff. Owen has just moved up in kindergarten to the reading group. This is a big deal. It means he knows all of his letters and their sounds and is ready to start learning to read.
His teacher told Lily yesterday in their conference that he is a wonderful, sweet, terrific boy who is good at learning and everything else.
We already knew that but it's nice to hear it from a third party.
Can you believe that Gibson will be in preschool next year?

How in the world does this happen?