Oh, but I have had the lazies today. I did get the mopping done and that feels good. You cannot believe the black, greasy dirt and dust of Lloyd. I just went and cleaned off the glass top table on the front porch. This is what the rag looked like when I was finished: 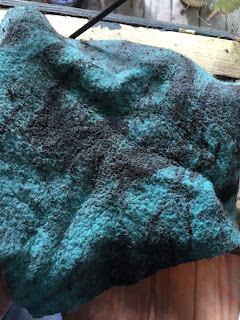 I cannot help but wonder if part of this is due to the century or so of the railroad tracks being in my back yard. I don't know but that's what it looks like.

August's culture already came back. Negative. So that is good. No antibiotics needed at this point! Hurray! We don't want to mess up his bacterial biome at this point. Tomorrow we will see what the dermatologist says.

Mr. Moon is back from Georgia and has gone over to see his big grandboys. He offered to tote me with him but I decided to stay here and remain lazy. I laid on the love couch for awhile and read more New Yorker articles. I have no idea why. At this moment I can't remember anything I just read. Oh yeah, an article on an American/Chinese-owned bank. Information I will never use.

Here's my view from the love couch. 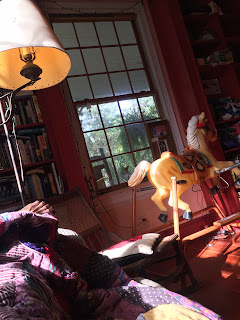 It's such a fine place to be lazy. I am so glad I bought that thing.

And that's about it from the magical kingdom of black dirt. In the real world, I see that Ann Coulter has said that if Donald Trump doesn't get elected, she'll have to change careers because it will all have been meaningless. "All" including Fox News. And that her next book will be a cookbook if that happens.
As if NOT electing Donald Trump wasn't already a great idea.
But I do have to ask- what sort of recipes would Ann Coulter write about because she obviously lives on one lettuce leaf and three cotton balls a day.

All right. That's about all the speculation I can handle today.

Your Faithful Correspondant...Ms. Moon
Posted by Ms. Moon at 5:45 PM