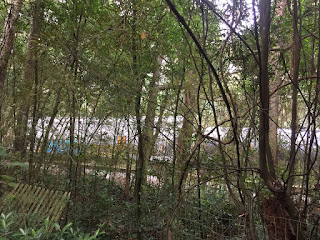 If you study that picture carefully, you will see that it contains two railroad cars. I took that picture standing with my back against the wall of the chicken house. That is how close the track is to my house. Here is how close it is from the back porch where I spend a good part of my day. 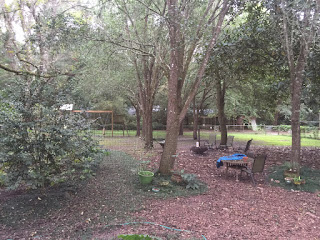 You might also notice that the train is not moving. I was working in the garden and a train started going by which I barely notice except that it makes it hard to hear my audio book and then it made an odd sound and then it screeched to a rusty halt. And halted it has been for about an hour now which means that the road which connects several very important and well-traveled highways is blocked and that means a lot of people are probably pissed.
I have no idea what happened. None at all. I'm just glad it didn't fall over. If it ever does, we are screwed because god only knows what those things haul- petrochemicals being probably the least of it.

So. I planted: carrots, beets, red lettuce, Romaine lettuce, rainbow chard, kale, arugula and collards. I had two more rows to do, the mustards and the mesclun and I gave out. Mr. Moon is finishing up for me.
Bless his heart. The chickens desperately want to help him. 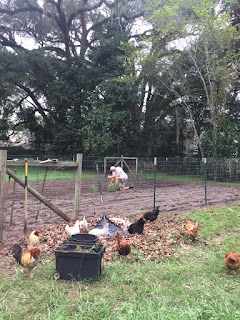 Except for Elvira who is hanging out in the Rubbermaid cart, don't ask me why. 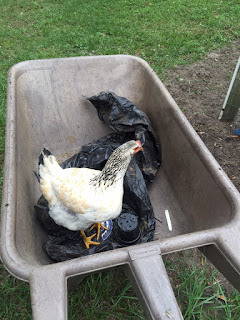 I guess she's one of those introverts we keep hearing about these days.

And that has been my day. The sun hasn't shown its face for one second nor has it rained. Maurice is sitting on the table looking at the train as if to say, "What the fuck?"
"I don't know, Maurice. I guess it broke."

Sure would be nice if it rained on my newly planted garden. I'm so glad to get it in. We shall see.

P.S. That seed program at the library? What a fucking joke. My packets contained approximately four seeds each. I am not kidding you. I guess if you're going to plant your arugula in a pot the size of a teacup, that's enough but if you're planning on actually eating any, it is not.
Nice try, library. Good idea. Bad follow-through.