Man. People REALLY get into Halloween. When I was a kid, it was just the children who dressed up. Now it appears to be everyone on Facebook. What's the deal?

I really like Halloween. Not that I participate in it beyond buying that bag of candy in case a child comes to the door which hasn't happened in years since the kids across the street got too old to go trick or treating. I like Halloween because it creates no sense of guilt in me whatsoever and I don't have do anything except buy that bag of candy which is bullshit because, like I said, no one ever comes by any more. I didn't even get a pumpkin this year for the first time in my adult life. I feel sort of bad about that. I do love the way the pumpkin smells when you cut into it and the chickens love the seeds. I think it's pretty swell to put a candle in that grinning jack-o-lantern (I don't go in for this fancy stencil-assisted pumpkin carving) and set it out on the fence post to burn all night.
Oh well.
I have fond memories of trick or treating as a child. Parents would buy their kids those cheap masks at the grocery store that hindered your breathing and made you sweat (it's not cold in central Florida in October) and you'd put on some witchy clothing or whatever sort of went with your mask. My best friend, Lucille Ferger's mama would load all five of her kids and me and my brother too up in their incredibly rusty and ugly brown Studebaker station wagon and drive us down the bumpy sand roads of Roseland and let us out while she sat in the car and smoked cigarettes so that we could hit up all the houses nearby with our plastic pumpkins for candy. It was awesome, especially when it was your turn to sit on the folded out rear door when we drove to the next spot.
I mean, that was some FUN, y'all.
Or at least we thought so.

Somehow I've never been a costume person. Even when I'm in plays I'm not that fond of them. I'm not sure why. I remember one play I was in that I played the part of about six different women of varying ages and description. Kathleen sat backstage and organized everything for me so that I could come offstage and she'd have everything ready that I needed. Clothes, wigs, jewelry, shoes. I am still grateful to her for that. She was so amazing at organization. AND at costumes.

But honestly, in real life, I just don't like costumes. I think maybe one of the last costumes I ever wore for Halloween was when I was married the first time and wore my then-husband's Goodwill suit to a party and someone told me I looked just like a New Orleans bull dyke which was sort of cool, although since I was at that time a nursing mother whose baby was with her, it was a bit disconcerting.

Bull dyke. Is that politically incorrect? I watched a little clip of Bill Maher talking about the PC police on Halloween costumes. You can watch it here if you want. It's pretty funny and I tend to agree with him. Seems like the only PC costumes these days are super heroes and TV characters and princesses. I hear that now hobo costumes are offensive to the homeless. Really? Jeez. Whatever.

Anyway, blah, blah, blah. I'm tired. I did work in the garden and I did not get it all done. Between each row I hoed with that crazy awesome new-fangled hoe we have and then got down on my knees and did hand-weeding between the plants themselves and then went and raked up a full Rubbermaid cart full of leaves and hauled that back to the garden and mulched the area I'd just weeded. So. Bending, raking, hoeing, kneeling, lifting, hauling. Repeat. I have about three more rows to go and I'll do that tomorrow. The kale and arugula are looking really good. The carrots and beets are doing okay, the rainbow chard and French Red Leaf lettuce are coming along and the mustards and collards are shooting up nicely. I finally put my gloves and the Rubbermaid cart up a little while ago and turned on the sprinklers. We are so dry. That little bit of rain we got last week didn't do much, to tell the truth. A garden is a lot of work but we've already eaten a few salads from it and there's nothing to compare to the way those greens taste so it's worth it.

We turn the clocks back tonight. Why do we still do that? It's so ridiculous. I mean, I do appreciate the extra hour we get in fall but come spring, it'll all suck again. I texted Mr. Moon to remind him of the time change and asked if this means that he'll have to get up at 3:30 a.m. instead of 4:30 a.m. because the deer are not aware of the clock turning. Is that right? Let's see. If he usually gets up at 4:30 to go hunt, wouldn't that be 3:30 tomorrow? Why is this so confusing?
Because it's bullshit. That's why.

So. Here are some pictures. 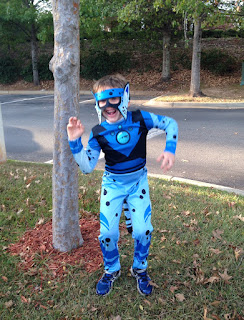 Owen as one of the Wild Kratt brothers in his jaguar incarnation. I don't really understand any of this, but I am assured that it is a real thing. 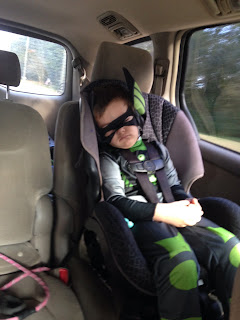 Wild Kratt brother in bat incarnation. As Lily said in the text, "Bats need to sleep when it is still light out." 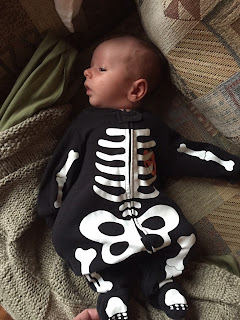 And last but not least, Baby August as a skeleton.

Here's another picture of that boy which Jessie sent me today. 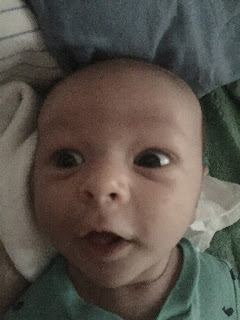 I feel certain that that is the face he made when he heard that he was going to be seeing his Mermer soon. They are coming home tomorrow.

Well, I've shut up the chickens for the night and they are all there in their favorite roosting places. I've turned off the sprinklers. Maurice joined me for these activities. I've set two of the clocks back already- the oven clock and the coffee maker clock. It seems completely absurd that tomorrow at this time it will only be 6:30.
It doesn't just seem absurd. It is.
And if I stay up until midnight, it will only be eleven and so on and so forth and here we all are, sheep in human clothing, agreeing to this absurd change.

I have naan rising to go with last night's curry thing. I hope I have the energy to cook it.

Enjoy your extra hour tonight.
I know I will, despite my bitchy bitchyness.