Normal Is The New Miracle 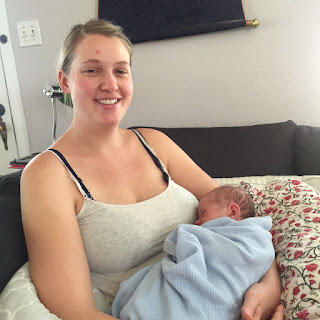 So Jessie and Vergil took August to see the dermatologist today. I am not sure how many doctors they have consulted so far about Gus's rash and they have gotten a different diagnosis from all of them but the one they got today seems correct to me.
Erythema Toxicum Neonatorum.
And no, it is not toxic at all, is quite normal, resolves on its own and IN FACT (and I am not making this up) the rash was growing less angry and disappearing in the hour or so that I was with them today.
Oh. I was so happy to be there, to get to hold him, to talk to him, to laugh at his funny faces with his mama. To see Vergil get up from his lunch and take his son to change his diaper the second Jessie discovered that he needed changing.
Yes sir, Jessie picked a good one to be her baby daddy.
When discussing everything that's happened during the Great Rash Incident, he said quite calmly and pragmatically, "Well, now we know how the system operates if we ever have another problem and where to go and what to expect."
Is that the voice of an engineer or what?
And he cooks real food (last night he made that curried squash and cashew soup I love so much) and he takes care of August in the mornings so Jessie can get a little sleep and he can build things and fix things and...well.

Here's the clothesline he put up with the diapers Jessie hung. 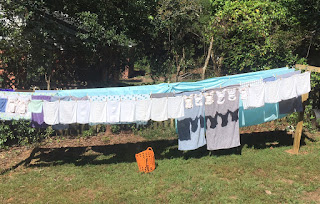 Tidy, eh?
Quite frankly, the daddies of today are nothing like the daddies during the era I grew up in. Of course, my daddy didn't do a damn thing that I remember except drink and scream at my mother and disappear for weeks at a time. Well, there was that one time he cooked steaks and we played Candy Land. That was AWESOME!
But I look at Vergil and I look at Jason and I am simply amazed and very gratified. Jason, whose father died when he was young, is everything I would want in the father for my grandchildren. He is so kind with them, so loving, so patient. He is fun and strong and so responsible and he works so hard and he takes care of his growing family fiercely and with joy. I see his face when he comes to pick up those boys up after a long day of work. He works hard, eight, nine, ten hour days and yet, when he walks in the door and sees his sons, his face breaks out in the biggest smile. He does things with his boys, he interacts with them the way fathers never used to do, and one of their favorite things to do when Lily works on Friday night is to have Super Dudes Night. They eat super dude food and play super dude games and wrestle like super dudes.
I am so proud of him. So grateful for both of my sons-in-law.
And they put up with the crazy, kissy, teary, giggly sort of love that comes with the family of the women they married.
With grace. With good humor. With acceptance.

My heart is so much more at peace tonight.
Here's what my garden looks like. You can see the difference between Mr. Moon's rows and my own. 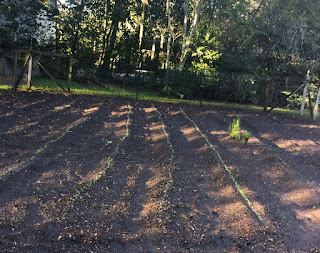 And now comes the terrible hard part of having to thin the rows. It hurts me to pull up tiny living plants. Isn't that ridiculous? And yet, it must be done or there will not be room and the plants will be crowded and stunted. I think I will wait for a little while. At least until there is enough growth so that I can use the thinnings in a salad.

Mr. Moon is gone again, this time on business and so here I am and I am fine. I sent him off with his snack bag and popcorn and coffee drink and kisses. The setting sun is fire-painting the old oak across the street as it does every night at this time. 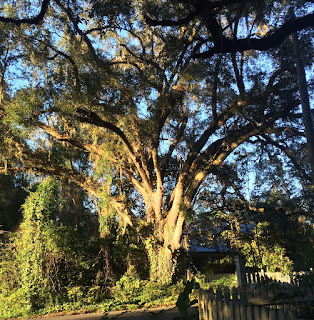 Trixie and Mabel are on the kitchen porch, hoping for one more treat before it's time to go to bed. 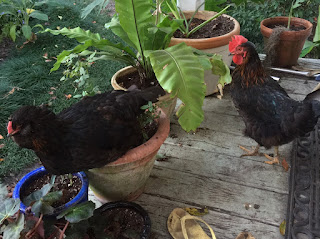 Remember when I thought that Trixie was dying? Well, she wasn't. And in fact, Mick just chased her down on her way back to the coop and had his way with her. She bawked a bit but now seems unperturbed and is back with Mabel, scratching in the grass while Mick has wandered off in his seeming post-coital daze of what-just-happened-there?

I could live another sixty-one years and not know all there is to know about either.
Or about love, for that matter.

Another thing I dreamed last night was that quite suddenly, my hair had turned as white as Chi-Chi and Cha-Cha's feathers.
And I loved it.