Friday night and the Super Dudes just left my driveway. I've cracked a beer and have Keith on the record player.
I swear to you- at least two of the songs on his album are about Mick Jagger.
He's been married to Patti Hansen for thirty-something years but he's been married to Mick Jagger for over fifty. Say what you will about Keith but when he falls in love, he stays that way.
Something to be said for that.

Anyway, Super Dudes. Yep. We had quite a day. We did go to Japanica! and I finally figured out why I can't take a decent picture. My iPhone camera is just fucking fucked. It will not focus. I feel completely lost. Isn't that ridiculous?
Here's a blurry picture of Owen drinking miso soup. 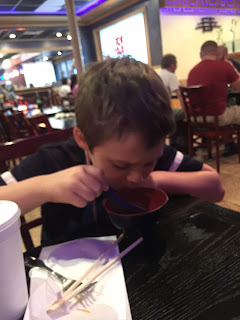 And here's a blurry picture of Gibson sitting in our friend Tom's boat which has been in our yard since gator season. 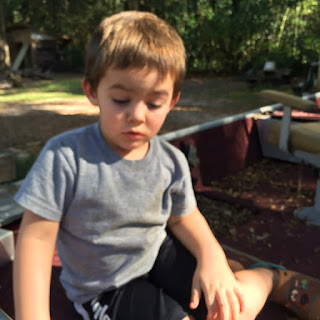 Mr. Moon's back in Georgia so it's just me and Maurice and Keith once again, now that the boys have gone home with their dad. And that's good. It's fine. It's been a long and interesting day. There were archeological digs and dirt-face-painting followed by showers and a walk to the post office and egg gatherings and garden-sprinkers-turning-on and a puzzle was done and most of a book read and chickens fed and so forth and so on. As usual.
I think I got an egg from every one of my layers today which does not include Lisa Marie because she's missing. Mr. Moon went to close all the chickens up last night and Lisa was not cuddled up with Elvira in the little nook where they go to roost. I haven't seen her all day either. I called my next door neighbor who also has chickens and she hasn't seen her but she'll keep an eye out. I can't even imagine what took Lisa Marie. She's a damn big hen, at least twice the size of Chi-Chi or Cha-Cha and I don't think a hawk could grab and carry her off and since she disappeared during the day, I find it hard to believe that a fox or coyote got her but something did unless she wrapped her possessions in a bandana tied to a stick, put it over her shoulder and jumped a freight train. I'd love to think that's what happened to her, but I sort of doubt it.

And so it goes, once again. Somehow today I still managed to wash the sheets and remake the bed even though Gibson wanted to lay on it and giggle while I tried to put the sheets on, and so I have clean sheets to look forward to tonight. I also read an article in the New Yorker about Henry David Thoreau which I loved because it was highly critical of old Thoreau and his faux getting away from it all there on Walden Pond which was lively with picnickers in the summer and ice skaters in the winter and where he was a twenty-minute walk to his mama's house where he'd go at least once a week to eat some of her cookies and visit with his family. The man was not right, y'all. And I have a theory that probably one out of a thousand people who quote him have actually read his most famous book because it's virtually unreadable and so full of self-righteousness and poppy-cock.
To be kind.
I never could get past the first chapter of that book and so reading the article for me was like hearing someone else pointing out that the Emperor was not wearing a stitch of clothing, no matter how proudly he strutted in the parade, his virginal dick swinging in time to the music for all to see.

The chickens are put up. No Lisa Marie in sight. Maybe she's in New Orleans, strolling down Bourbon Street, or pecking discretely at the crumbs of beignets at Cafe du Monde. Which makes me think about the trip Mr. Moon and I took to New Orleans when we were first falling in love and the strange and magical things which happened there.

Luna The Longest Living Feral Cat and Maurice are having a howl and mewl face-off right now and the sky has grown dark. Hissing has ensued.

Here's a picture I took of the little hook-and-eye moon with a "real" camera. 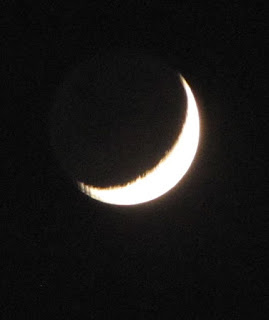 And here is the gratuitous picture of baby Gussie Glinden that Jessie sent me today. 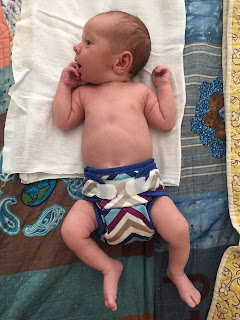 Look at that pretty long, skinny boy. Take it in now because he's going to be fat as a little sopapilla before we know it.

I think Walt Whitman did.