Take Another Little Piece Of My Heart

Well. I have lived long enough to see something I never thought I'd see. Actually, I never had a thought about the subject at all, it was just too far-fetched. Too absurd to even consider. 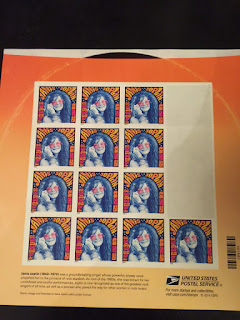 No. That is not an old record cover. 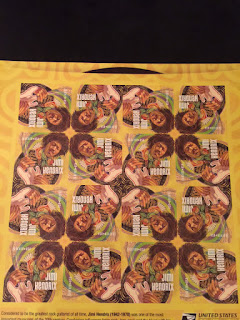 Neither is this.
Both are United States postage stamps.

It's like...well, I have nothing to compare this too. If forty-five years ago when both of these musicians died and someone had said, "Some day they will be on stamps," I would literally have said, "Oh, sweetie. Let's talk about this when you're done tripping."

And yet. There they are.

I went to the Post Office this morning to mail a few cards and I needed stamps. The Post Master, a very polite and unassuming guy whom I chat with casually some mornings, brought out all the new stamps and I could not believe the Jimi and Janis ones. I swear- I could have keeled over.
And of course I bought those and we began a conversation and started talking about the music we'd seen, the, uh, experiences we'd had and it was simply some of the most fun I've had in a long time. He's now a Christian minister besides being an employee of the P.O. but he loves his memories, as I love mine. We laughed and recognized each other in a brand new way.
Who knew?
Who ever knows?

I went to town and shopped with Lily and Jessie and Gibson. Gibson, I believe, is a bit rattled about the move and didn't get enough sleep last night. Sure enough, he woke up and couldn't find his mama but she found him. He must have been hungry today too, because at Costco, he kept demanding to see the "food man." We found not only the food man but many of his brothers and sisters and Gibson ate his entire lunch sampling the wares. He ate bread and butter and a piece of bagel bite and chicken wonton and scalloped potatoes. Other things too, I believe. We all sampled a few things, to be honest. Jessie is feeling more crampy but nothing regular. Still- as all of us who have been through it know, labor is a process which rarely begins as it is portrayed in films and on TV, dramatically and all at once with either waters breaking and the woman going immediately into labor or with one huge contraction which takes her to her knees, signaling the imminent arrival of her babe with much screaming and rushing about. Of course, occasionally it does happen that way (and what's up with those women who don't know they're pregnant until the baby begins to emerge?) but mostly, as I said, it is a process and the uterus has to exercise and the baby has to settle down into place and everything has to coordinate in the proper way before the active part of it begins.
Nature. She knows what she's going.
And Jessie is well into that process, just as she should be.
One of these days, these nights, I will be getting that call.

And so it is going. I am making the heavenly curried butternut squash and sweet potato and cashew soup. 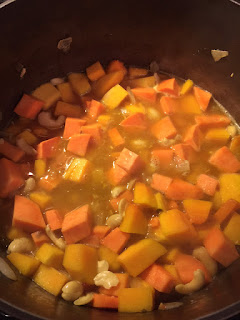 Here it is, simmering in the pre-pureeing part. As I told a friend, I am seeking salvation and peace through ginger mincing. Tonight we shall eat that for our supper and tomorrow, we will be having lunch at Owen's school for Grandparent's Day if I am not attending a birth. Mr. Moon and I will bring our own lunches and we and Owen's other grandma will dine in the cafeteria of Owen's school.
I bet Owen has the tallest grandpa there.
How lovely, this time when I am sure that he is very excited about having his old grandfolks come and eat lunch at his school with him! And he will be. One of these days, he'd rather die than face that prospect, I am sure, and I am so aware of this that I cherish the opportunity.

And then on Saturday, he will turn six and there will be a party at his house for him and his mama whose birthday it will be the next day. As it is Vergil's birthday as well. There are so many birthdays right now- all of the children conceived right between Christmas and New Year's. I wonder if Jessie's baby will end up sharing a birthday with his father and his aunt or maybe, if he comes tomorrow, with our beloved Shayla whose birthday is that day? Or on the day after his daddy and aunt's birthday which is Billy's birthday?
Who knows?
Not me.

So it's been a good day and my house is open because the temperature has cooled a little and Mr. Moon is sitting in a deer stand but will be home to eat his soup and I have new stamps and the chickens are putting themselves to bed. Here's a picture of Elvira that I took today. 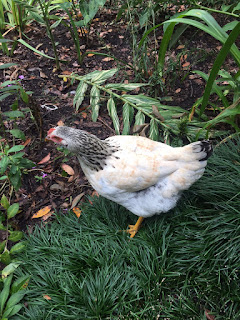 Do you see how her tail-feathers are starting to grow out? I swear to god, this chicken and her sister are the slowest developing chickens I've ever had.
I hope that means they will live a long, long time.

We go on. It's all a process. Patience is a virtue whether in pregnancy or labor or soup-making or chicken-maturing or hunting or love.
Especially love.