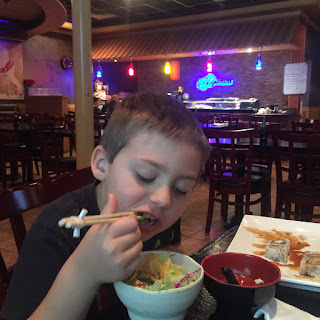 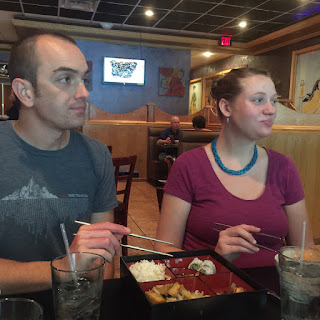 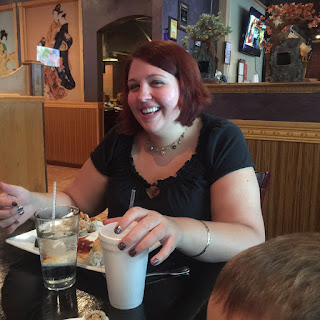 Gibson did not want me to take his picture but we all had a good time at Japanica! and someday I need to take a picture of my Bento Box with curried tofu but I always forget and just start destroying it immediately. I love it because although I always order the same thing, the green curry tofu always comes with different vegetables and they are always delicious. Owen ate all his miso soup, TWO salads, and all of his sushi. Oh, how that child loves Japanica!
There was a little boy there, probably about two, the child of someone who works there obviously, and he kept strolling out of the kitchen, chewing on sheets of seaweed. He was so precious I wanted to scoop him up and kiss him but of course we can't do things like that. He and Gibson made friends though, and before we knew it, the little boy had taken Gibson out to where the Lion's Club (I think) has placed a box of candy for people to take a piece and donate some money and were just about to plunder it when they were discovered. 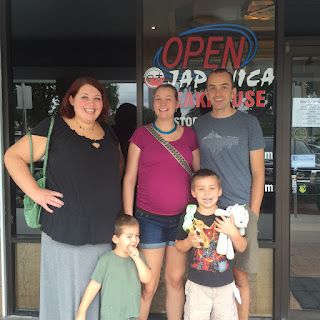 Here's everyone but me. Please note Owen's daughters. He brought them in a knapsack. They are very shy but they did come out to eat some edamame beans.

I brought the boys home and I was not feeling at the top of my Mer Mer game but they are sweet and good boys and all went well. I slammed my finger in a pocket door and I'm pretty sure it's not broken but it's swollen up good and made me curse when it happened. Hurt like hell. We played the matching game again and the boys gave me a make-over which was so extreme that even Owen suggested I wash my face in order not to scare my husband. I looked like a Celt or something. Lots of blue. We played hide-the-stuffed-animals and the boys played tea party. We fed biscuits to the chickens and the boys watched more Sponge Bob than was probably necessary. They also took a long and very energetic shower. They are clean. Trust me.
Jason was late getting off work. Now that he's a manager, it's never quite cut in stone as to when he'll be able to leave. He was exhausted when he got here but I had fed the boys a pancake supper and they'd had their showers so hopefully, they can go straight to bed when they get home. Both he and Lily work so very, very hard. I am in awe of them and love them for being the incredible parents they are. When the boys left, Owen's words to me as they were pulling out of the driveway were, "Give Boppy a hug and a kiss and tell him I love him!" This sort of thing does not happen by accident.

In the midst of all of this, Mr. Moon left for auction and so here I am, alone in the quiet. I have a potato in the oven. That is what I want for my supper. A baked potato.
It's been that sort of day. I want a baked potato, all salty and warm and delicious. I remember when I was a child and the "elegant" restaurants brought out those little stainless steel servers with sour cream and bacon and chives to add to your potato.
Remember that?
And the same sort of stainless steel things they brought out with the salad? They held Thousand Island dressing, French dressing, and Roquefort.
Simpler, more comforting times.

Except for the, you know, Civil Rights movement straining in its birth pangs and the Viet Nam war and the threat of nuclear annihilation.
Yeah. Good times.

We move on, we move back. Things change. Nothing changes.

Potatoes pretty much stay the same. And little boys. And pregnant ladies. And how grandmas feel about their grandchildren.

Time to put the chickens up.  I hope that tonight a possum doesn't fall through the dog door like one did last night, freaking the fuck out of me. I was sitting here, five feet away when it did that and my immediate thought was, "That is the clumsiest cat I have ever seen."
Too much nature and yet, just enough.