A Review And A Ramble 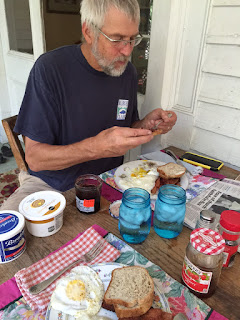 Sunday, creeping up on noon and we just finished our breakfast.
It is very quiet and still here in Lloyd, quiet enough that the music from the church next door can be heard, a distant throb and wail.

We watched "Under The Influence" last night and I loved it. Of course. The title is a double entendre, on one hand a tongue in cheek nod to Keith's well-known love of substances, but on the other and more serious hand, a reference to all of the music that influenced him and still does influence him. Started with his mama whom he called, "a beautiful master of the radio dial." Jazz and blues and then, country music, reggae, a little bit of Mozart thrown in. Billy Holiday, Muddy Waters, Howling Wolf, Porter Wagner, Chuck Berry, Elvis. How when the Stones started out, they were simply interested in bringing Chicago blues to the attention of a wider audience. What it meant to him to bring that back to the U.S. The incredible amazement when he got to meet some of his primal heroes, play with them. There's footage of him playing with Muddy and getting slapped down by Chuck. There are so many great lines in the film.
"I crashed at Muddy's house and woke up at Howling Wolf's."
How many people can say that?
Just as in his autobiography, in the documentary he gives credit and honor over and over and over again.
The New York Times review of the film said that there is a "certain amount of self-aggrandizement and of Mr. Richards laughing at his own remarks."
I kept waiting to hear some of that self-aggrandizement but all I heard was an honest assessment of the role Mr. Richards played in furthering and evolving the music that helped shape and define a very interesting era in history. There is a sweetness to the man which is stunning, really. I mean, I grew up with images like this of Keith Richards. 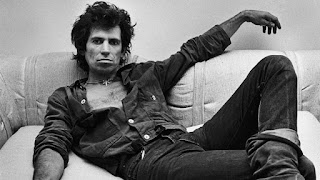 And yet, inside him there was this child, plotting on how to get ahold of his grandfather's guitar. 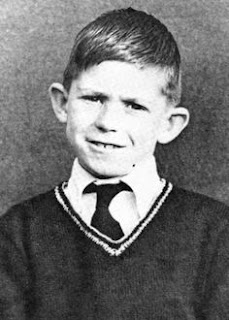 And now there is this. 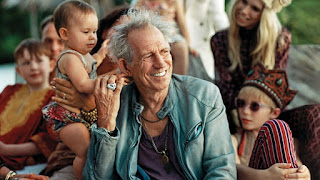 As we watched the film, Mr. Moon asked, "Is it fair to say that he looks like Yoda?"
And I said, "Definitely."

I was thinking yesterday about how as we age, we lose our friends. How the very, very old will often say, "Everyone I know has died."
And how we also lose our mentors, our touchstones, our people who seemed to be there in one way or another as we grow up, as we grow in all ways. I remember when John Lennon was murdered at the absurdly young age of forty and I thought, "Oh, John. Who's going to teach us how to grow old?"
Well. Maybe I have my answer.

Richards says he is not aging, he is evolving. He does not ignore the fact that he is, despite all evidence to the contrary, not immortal. He discusses that. But his life is a good example that this evolving need not ever end. Even as Keith's greatest joy in music is to play with the Rolling Stones (and honestly, I think that Mick Jagger will always and forever be his truest love), he will never stop loving to play music which makes him happy with all sorts of musicians.
In fact, the joy on his face when was making "Crosseyed Heart" in the studio is transcendent. That is the only word for it. And despite those gnarled fingers with their thickened joints, he can still play the shit out of guitar. He can shred it, he can tickle it, he can weave hummingbirds on it.
And oh, how happy that makes him!

So yeah, overall I sort of liked the film.
I think I'll go watch it again.

It's Sunday. Here's the biggest banana spider (golden orb weaver) in the yard this year. 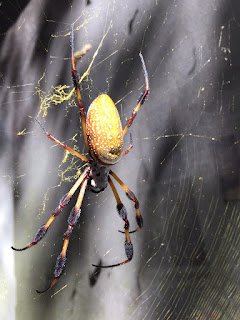 You can't get a sense of scale, but when I tell you that her abdomen is bigger and thicker than the top joint of my pointer finger, it is the truth. Soon, she will die, having mated and laid her eggs which will hatch out next year.
Perhaps out of those hundreds of tiny creatures which emerge from her eggs will be a daughter, as big and beautiful as she is and she, too, will pass down the genes of her species and spend the summer outside of my porch, inspiring my awe and amazement. Most of those minuscule hatchlings will not make it to grow a tenth of her size.

One never knows which of us will survive, will thrive, will further whatever it is that we've been given to do on this earth. Most of us, in fact, will probably never even know what that is.

But some do. And aren't we lucky to have them?