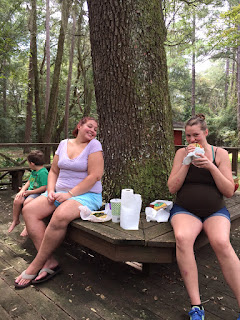 Jessie looked around at Lily's new deck and said, "This is a better deck than most bars have."
It's true.
Those girls scrubbed and vacuumed and I did nothing but go get sandwiches for lunch and Jessie even went with me and we wished we'd gotten cake as well.

It's such a beautiful house and the yard is all green and calm and it is so quiet there, the very end of a red clay road and whoever did the yard originally loved plants and there are some I recognize and some I don't and Lily wants to plant blueberries and citrus.

On my way home from the house, I saw a tiny duckling-looking bird sitting right on the edge of the well-traveled road. I drove on a ways and then I couldn't stand it and turned around and came back and parked my car and walked down to it. It was not seemingly injured but ran in fright, it's little paddly feet taking it as fast as it could. A big American truck with camo trimmings pulling a trailer of yard-work equipment stopped in the middle of the road and two guys got out.
"I think that's a mallard," said the older man, redheaded and stocky and I am sure very much a follower and practicer of the hunting arts.
We picked the little fellow up and then the man said he thought maybe it was a "herring," which I think meant "heron" and I don't know what it was. A water bird, for sure, still in down but with a long neck and those webbed feet.
We debated about what to do with it.
The younger guy said he lived on a lake. The older guy said he did too.
"Maybe I'll take it to Francis tomorrow," he said. "I'll keep it until then."
And they took the little birdling gently and we all thanked each other for stopping and they got back into their trucks and went on their way and I went on mine.

My husband is home.

These are the very good things which happened today.