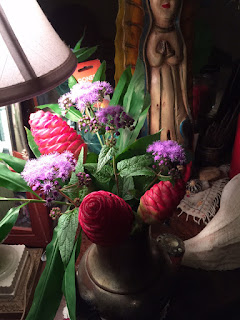 Dear Sweet Baby Jesus, Holy Mother of GOD, Mysterious Holy Ghost and The Miracles That Be.

I did not get any good pictures from the birthday(s) party because there was just too damn much going on. Like...this. 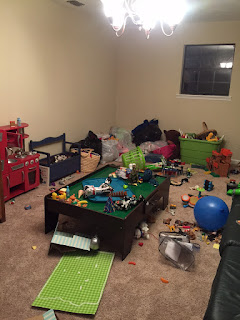 That's what Lily and Jason's living room looks like tonight. Actually, it has been designated as the play room. You can see why. There were five kids at the party and when we were leaving, that's what it looked like in there.
There were Owen and Gibson and Waylon and Lenore and Gabe. And that's before any of the birthday presents were moved in there. I did bring a bunch of pots and pans and plastic food and appliances to add to the play kitchen and if you look carefully, you can see some of those. Owen told me as we were about to leave, "Mer! Thanks for all the food! We had an awesome food fight!"
Oh Lord.

But the rest of the house looked really, really good. Unbelievably good, considering that as of last week, they'd not moved one thing. I made Lily and Jason pose in front of the fireplace. I kept saying to Lily, "Can you believe this? Can you believe you're in your new house?" 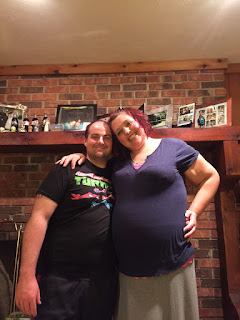 They have worked like demon dogs this week to get things moved and put in place. I tried to get the boys to pose with them and they sort of did although Gibson was kicking and screaming (although it looks like he was smiling) and Owen was a bit distracted. 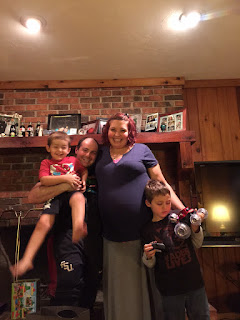 He got some amazing presents and here's the most amazing thing to me- he asked his friend Gabe to help him unwrap his presents and read him his cards. Gabe is in the third grade and probably reads better than most of us. So they had a little team going and after Owen unwrapped each present and Gabe read the card, Owen went to the person or persons who had given him the present and hugged them. It was just absolutely beautiful. 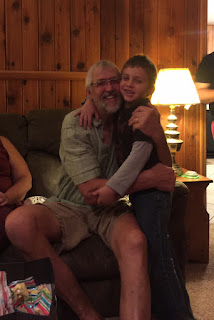 The house is perfect for a party. The rooms flow and the back deck? Just heaven. Heaven. And of course, that huge play room for the children.

My cake turned out fine. Here's what it looked like, wrapped in plastic as I held it and the zinnias I picked to take to Lily in my lap in the car on the way over. 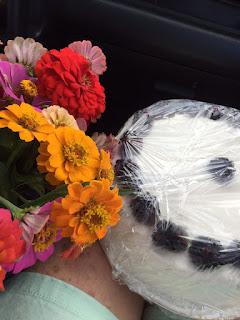 Those are big giant blackberries on the top. And those are the last of the zinnias. They're probably all being pulled tomorrow. It is time, time, TIME to till and plant the fall garden.
I want my arugula! And collards!

And so, that was it. A house-warming and birthday parties. Vergil got to help blow out the candles. Which I did not get a picture of. But here's what the cakes looked like after everyone had some. 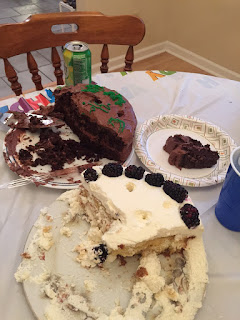 I asked Owen what kind of cake his mother made him before we cut it.
"Dinosaur," he said.
And so it was. 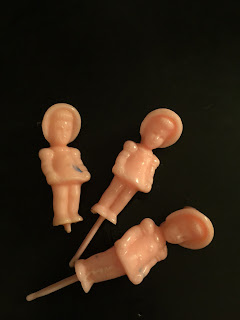 Those are the little-girl candle holders that were mine as a little girl and which I still put on my daughters' birthday cakes. And just think- in fifteen months or so, when we celebrate the new grand-daughter's birthday, they may be on her cake too.

But of course, that is up to Lily and they're here if she wants them. Little pieces of pink plastic and you have to use a pencil sharpener to make the candles small enough to fit in them and I remembered to bring that tonight too.
I also brought the canning kettle and a hot water bottle for Jessie to take home. The canning kettle is to heat water in for the birth/and/or/labor pool. The hot water bottle is for back labor, if she wants it. She is just...juicy and gorgeous and still not miserable.
Maybe she won't have to be. Wouldn't that be wonderful?

So. A very good day. I got to see all of my babies and my grand babies and Billy and Shayla and Waylon, and Mr. Moon and I even had some sweet time.
I keep thinking about how thirty years ago, thirty years ago! I was just about to go into labor with Lily, our first baby together. I woke up in the night and knew it was happening and went out on the back steps of the house we lived in then and sat and looked up at the stars and thought, "Here we go." 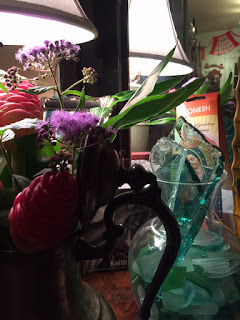 And here we are.

Thank ALL of the powers that be and the miracles thereof.