Last night when I got over to Lily's old house, Owen yelled at me to come and see the cicada coming out of his shell.
I have lived in Florida for most of my life and have never seen this process. I've seen hundreds of left-behind cicada shells hanging on trees (usually pine trees) but never have I see the molting and emerging. 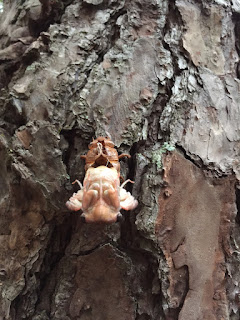 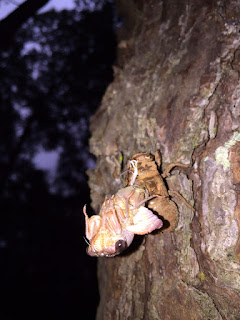 How freaky and alien is that? As it dried and the skin hardened, the legs developed right before our eyes. We kept checking on it. Did it hurt? Was the cicada scared? Mystified? How could anyone know?

We went inside for a few minutes. Like, fifteen, and when we came back out into the dark to check, this is what had happened. 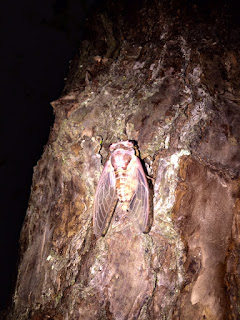 I was distraught that I hadn't stayed outside to watch. I'm sure I could find a video of the process on Youtube but that wouldn't be the same.

So many things on this earth all around us that we have no idea about. It never ceases to astound me.

Mr. Moon is already in town with the truck and the trailer. I will be going in later to help with the boys, probably, and to go with Mr. Moon for his echocardiogram. It is a bit ironic that this appointment to see if his heart is healthy will interrupt his hauling of beds and couches.
They moved the refrigerator and chest freezer last night. Got the hot water heater going. Maybe the little family will be able to sleep in their new house tonight. I hope so. Owen wanted to desperately last night. He said he was going to force his mother to let them.
I said, "Honey, you can't do that."
"Yes I can," he said. "I'm going to force her to death."
He is so excited.
I keep thinking of Gibson, waking up in the night as he still does sometimes, wanting to get into his parent's bed. Will he get lost in the new house? There are hallways and rooms between his bed and Mama's, unlike where he's been living his entire life where he only has to walk a few steps down one hallway to find her.
He'll manage.
Change is good. Sometimes it comes so eerily fast we miss it and sometimes it comes so gradually we don't recognize it.

Either way, we need to pay attention.