I was supposed to go to town today to be at Jessie's house when her midwife came for a prenatal appointment. However, the midwife has a mama in labor so they're going to have to reschedule.
The big excitement about this appointment was that they were going to be able to hear the baby's heartbeat for the first time and I think that despite all of Jessie's symptoms and positive pregnancy tests, she did not really believe that there was a baby in there until she could hear that heart beating away.
And Vergil has to be gone next week and so they were both vastly disappointed that he wasn't going to be able to be with her for this monumental moment.
So.
This being 2015, there is an iPhone app which allows you to not only hear your baby's heartbeat but to record it.
Are you with me?
It does not work on the Doppler effect, but merely magnification of sound and they fooled around with the app and they found the heartbeat and now I, too, have been able to hear it in a link they sent me.

Oh, Steve Jobs- did you ever imagine such as this?

When I was in the baby biz, this instrument was high-tech. 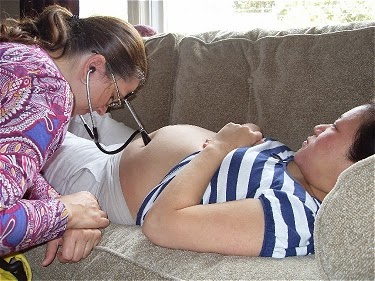 Many midwives still use the fetascope, wanting to limit the amount of sound waves the baby is exposed to. And it worked. And it worked well and still does.
Still...

What a world we live in.

And after I listened to my grandchild's heartbeat on the computer a few times and cried a little bit,  I took my walk and it is humid and warm and I sweated like a beast. I stopped to chat with Miss Liola who told me that Papa Jay's grand opening is going to be March 21. We are both excited. Also, Miss Liola reminded me that I was going to bring her some aloe plants which I came right home and potted up. I will take her some greens and some eggs, as well. Perhaps the boys and I will walk up there to deliver them if it is not raining.

And now I need to run and get ready for Owen and Gibson. Make the bed, wash the dishes, eat some lunch, pick some greens. Another busy day but a very special one, too, being able to hear that sound- the proof of the life inside my daughter's womb.

In poultry news, I saw Mick on top of Miss Nicey the other day which means he has moved on to the younger hens and Elvis is a bit frantic. He did not want to let him out of the coop this morning. Mr. Moon says that this is a process we do not need to intervene in and I agree. Nature will take its course.

Nature usually does have things worked out, even if it seems a bit cruel to us humans with our illusions of how things "should be" despite perceived evidence to the contrary. This is true with both pregnancy and childbirth as well as with roosters and hens.
Still, technology can and should be employed sometimes, I think. It can enrich our lives tremendously and it does.

And in that vein, here is a little video I took on my iPad of the confrontation between Elvis and Mick this morning.

What a world! Same as it ever was, changing all the time.