A fat black and yellow bumble bee was doing her work on the wild azalea blossoms this morning as I took my walk. 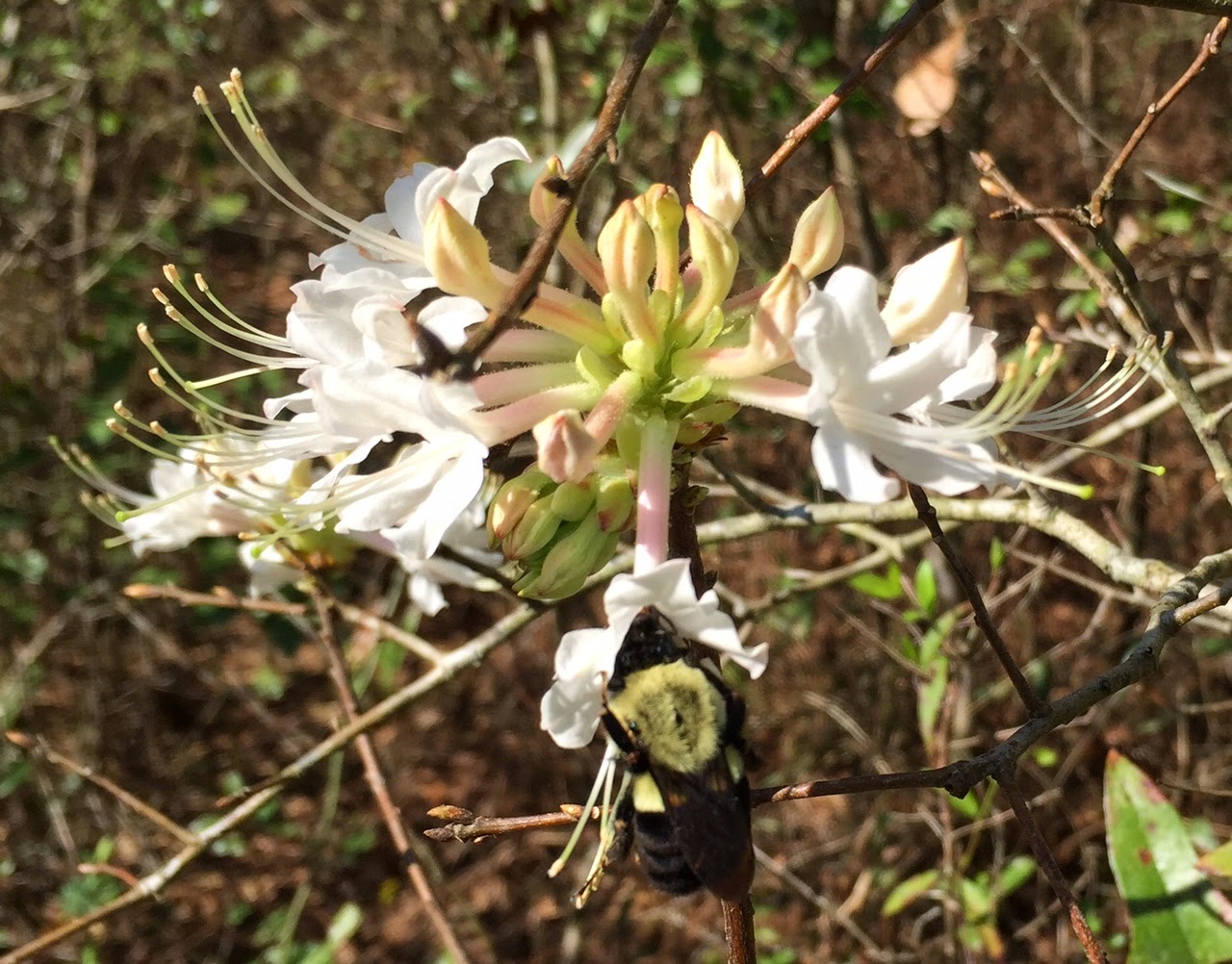 Not a good picture but you know- phone, bees, my abilities. Etc.

I woke up this morning from courtly dreams of love so sweet that I did not want to get out of my bed where Maurice was drowsing beside me. But eventually, one must and as I got up, I looked down at the finger I burned the other night to find that the incredibly horrifying blister which had arisen yesterday was even worse and had been joined by another blister on the top part of my finger.
I'd been toasting some pecans for an apple salad in a small iron skillet on the stove and after I'd dumped the toasted pecans into a bowl, I ran water into the pan as I do and it must have been hotter than usual or else I just simply had my hand in the wrong position or...something, and the steam rose up and burnt my pointer finger in a most alarming and painful way. I put aloe on it, of course, and went about my business, finishing supper preparations and it did hurt but the aloe soothed it and I went to bed surprised that it hadn't blistered, thinking it must not have been as bad as I'd thought only to wake up yesterday to see something quite alien-like there on top of the burn, a clear slug of encased liquid.
So ugly I would not ever take a picture and put it on the internet. Or anywhere for that matter. Frankly, I don't even want to look at it.
And today, as I said it is even bigger and I am not worried about it, at least while the blister remains intact. "Blisters are nature's bandages," I always say, and yes they are. But once it bursts, I'm going to have to be scrupulous about keeping it clean and covered. It's sterile in there now and the longer the blisters remain intact, the better.
Ah lah.
I'll probably live.

The wisteria are opening all over and spring is surely here. Elvis and Mick continue their uneasy truce. This morning I saw Elvis run up behind Mick who was on one of the old hens and literally knock him off. Later though, he didn't have enough time to run across the yard and get him off of Nicey before the deed was done. Chicken sex literally lasts only seconds.
I do not write about all of this fucking with any sort of prurient purpose. I just find it incredibly interesting to see how a new rooster fits in (and doesn't fit in) with an established flock. I feel like a chicken anthropologist, observing behavior, making notes. And I truly wish that one of the hens would go broody and sit on some eggs so that all of this sexing did not go for naught. No signs of that yet. Mr. Moon saw Camellia bowing up with Mick yesterday like a rooster. They were bumping chests and jumping up into the air. I guess that Camellia was having NONE OF IT.
The old hens, believe it or not, have laid me an egg or two in the past week. They have not laid in a year, really. Spring is powerful.
Resurrection can be real.
The bird's nest fern that overwintered in the house had leaves that were drooped so badly I had thought they'd have to be cut but since I've put it out on the porch and given it a really good watering, it is back again and new fronds are unfurling. 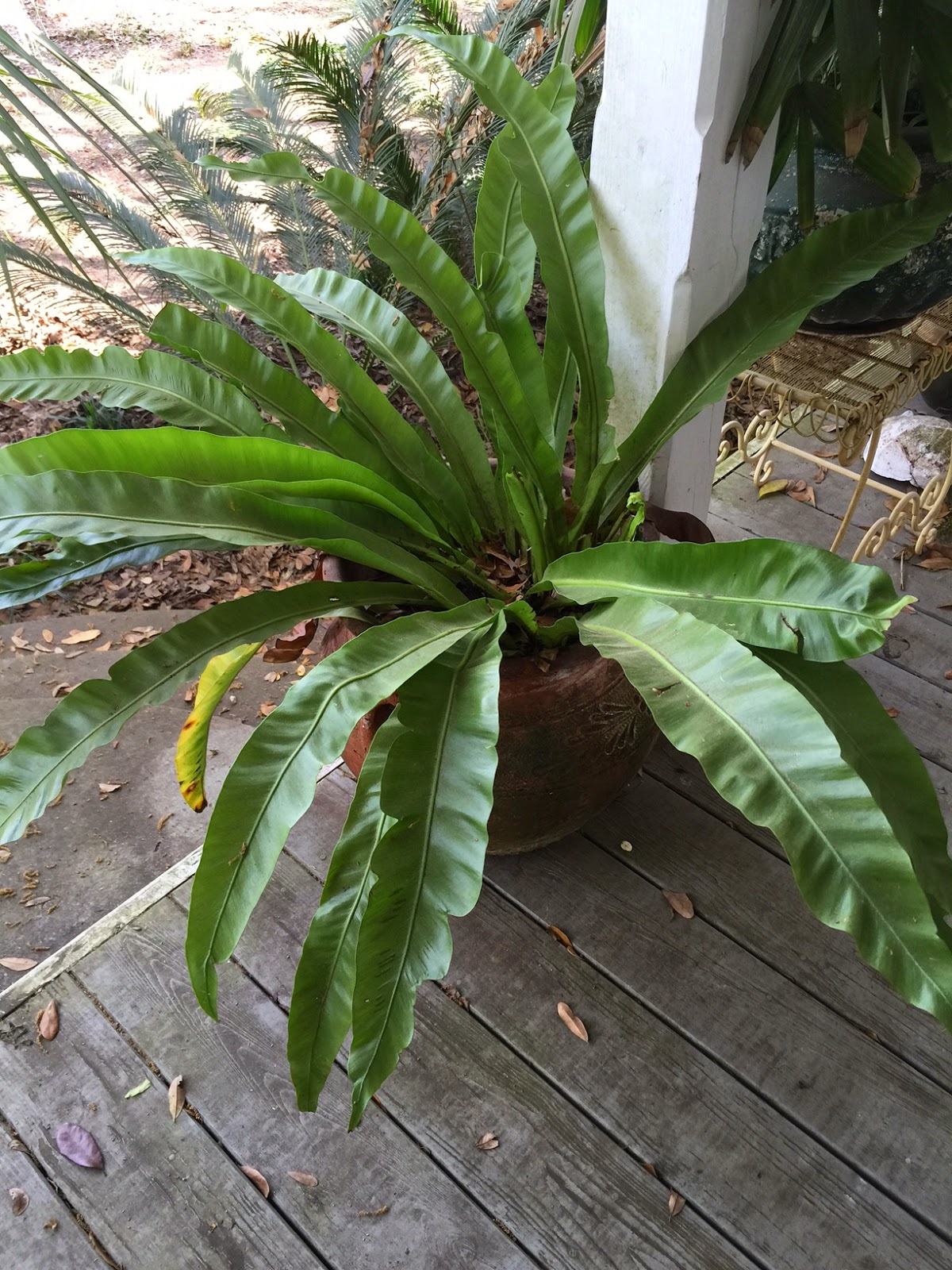 I am getting pictures from Lily at Disney World. I have never seen my boys look so happy. 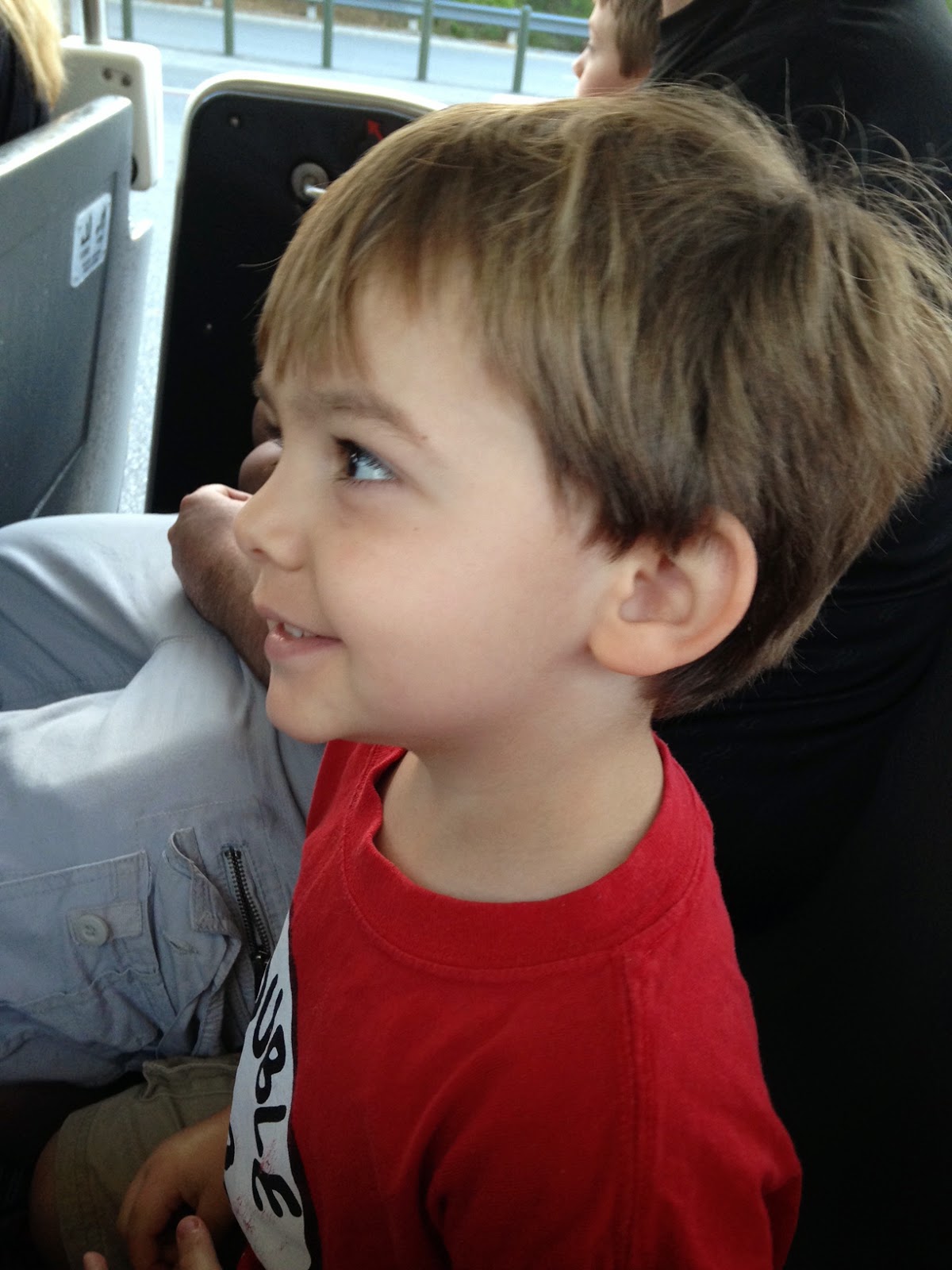 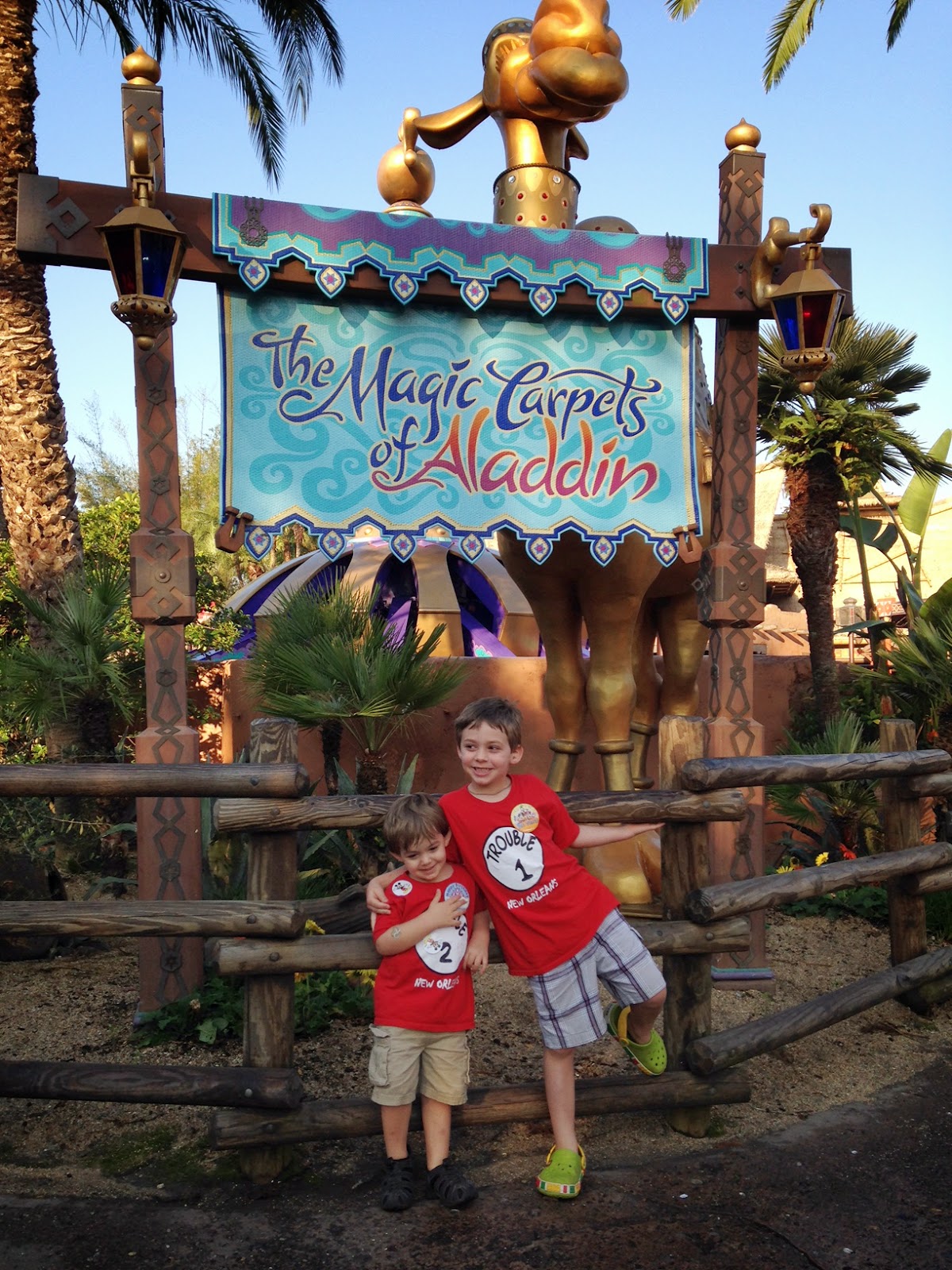 Which in turn makes me so happy. That picture of Gibson makes me want to be there, kissing his beautiful excited face. I would like to hear what Owen has to say about it all. Am I actually saying that I wish I'd gone too?
Oh my god. That can't be true. And really, in my heart, it makes me happiest to think of Lily and Jason and those boys being a family together, no one else to interfere with a family's joy. Here's a picture taken last night at the Medieval Times Dinner and Tournament place where, according to Google, they have "jousting, horsemanship and falconry, plus a 4-course, utensil-free meal served in a castlelike space." 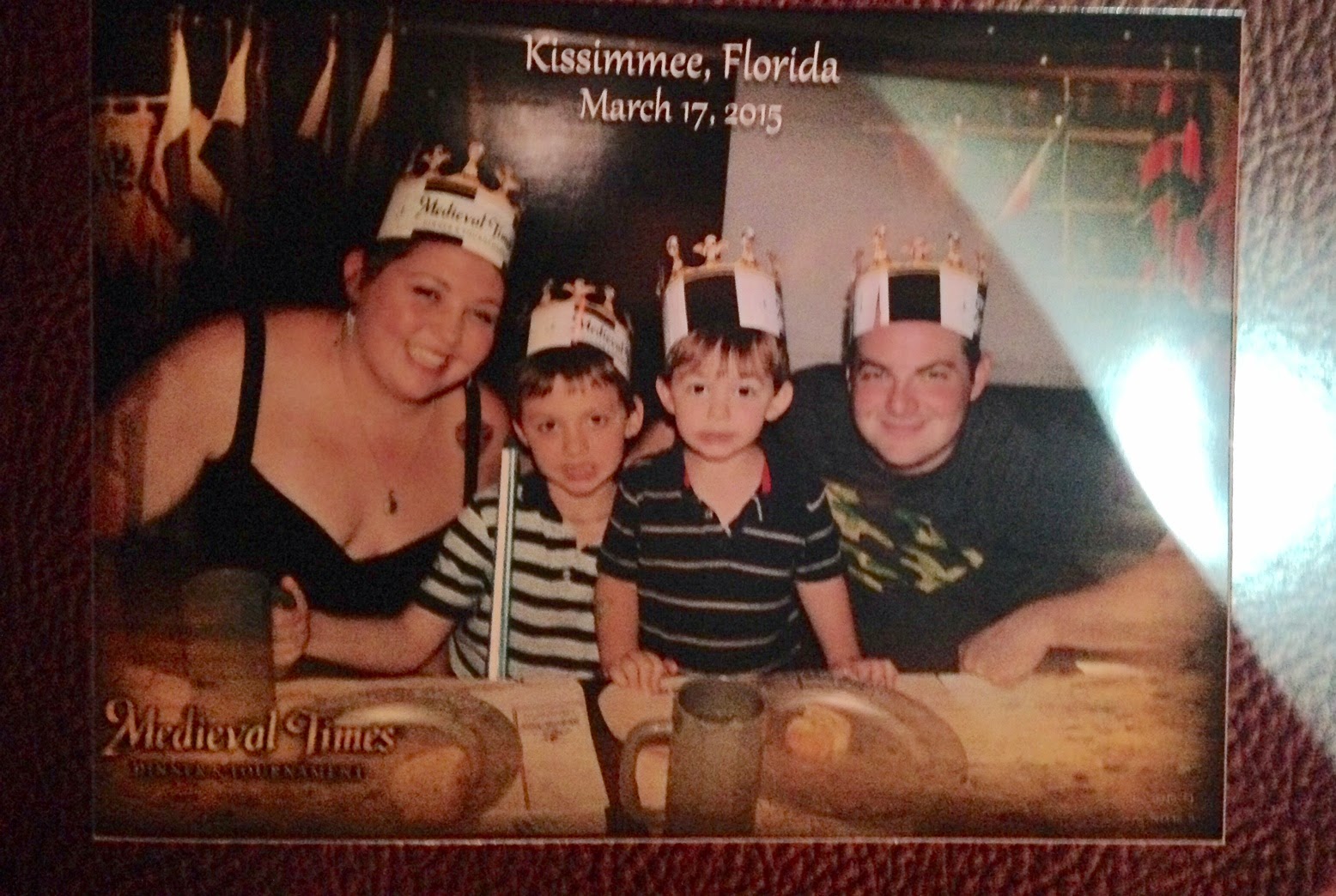 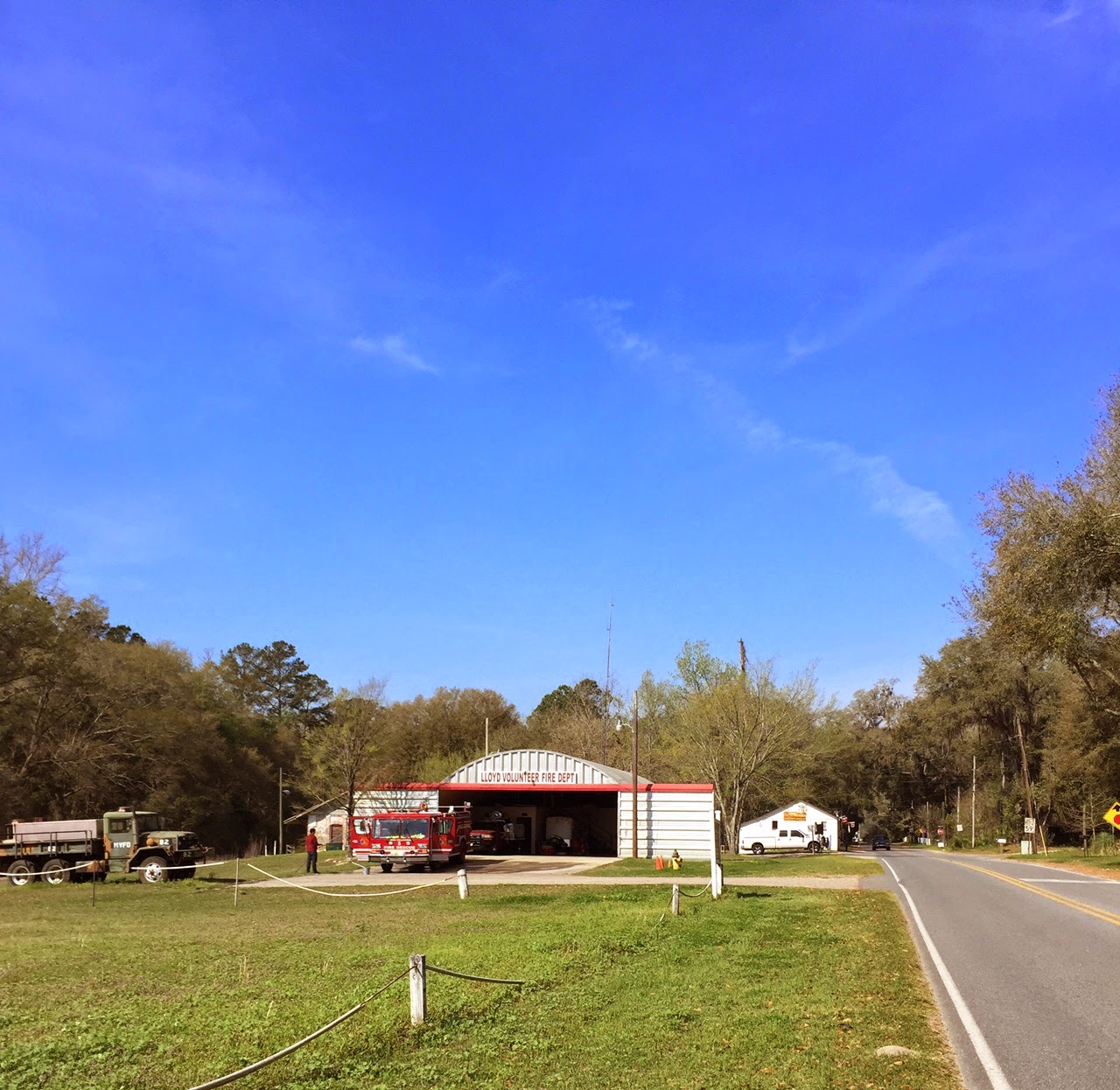 Blue skies over the Lloyd volunteer fire station where the truck is being washed and Papa Jay's is in the background. Still not open but I see activity going on.