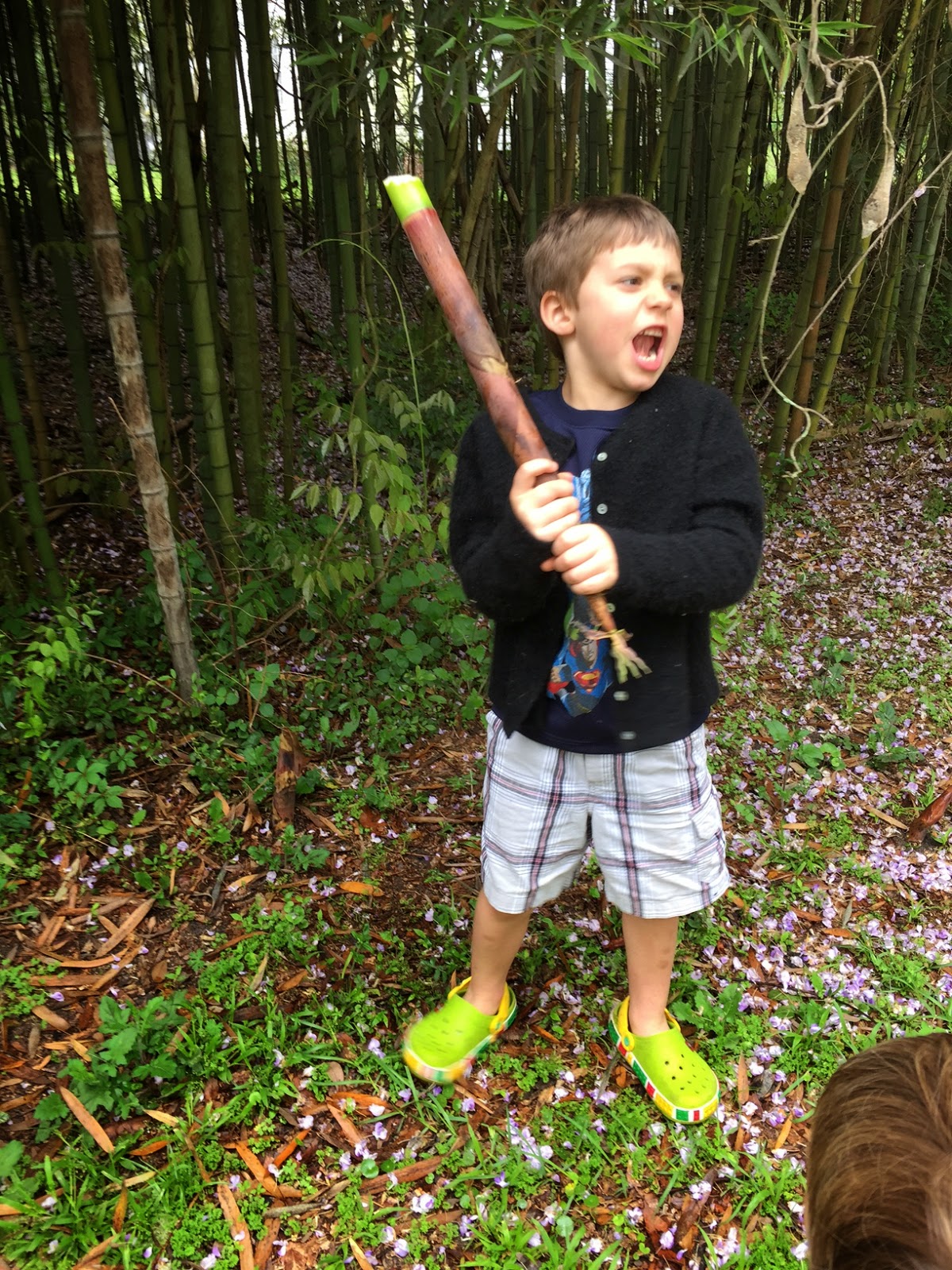 Oh! The horrible agony of kicking bamboo and having to use it as a sword or a club or a weapon of some sort! And then the even worse agony of spending fifteen minutes peeling it and demanding that your grandmother cook it for dinner for his Boppy.
I suppose if we were starving...

Those boys are still here but Boppy is home and playing with them at the moment. We've had such a good day. 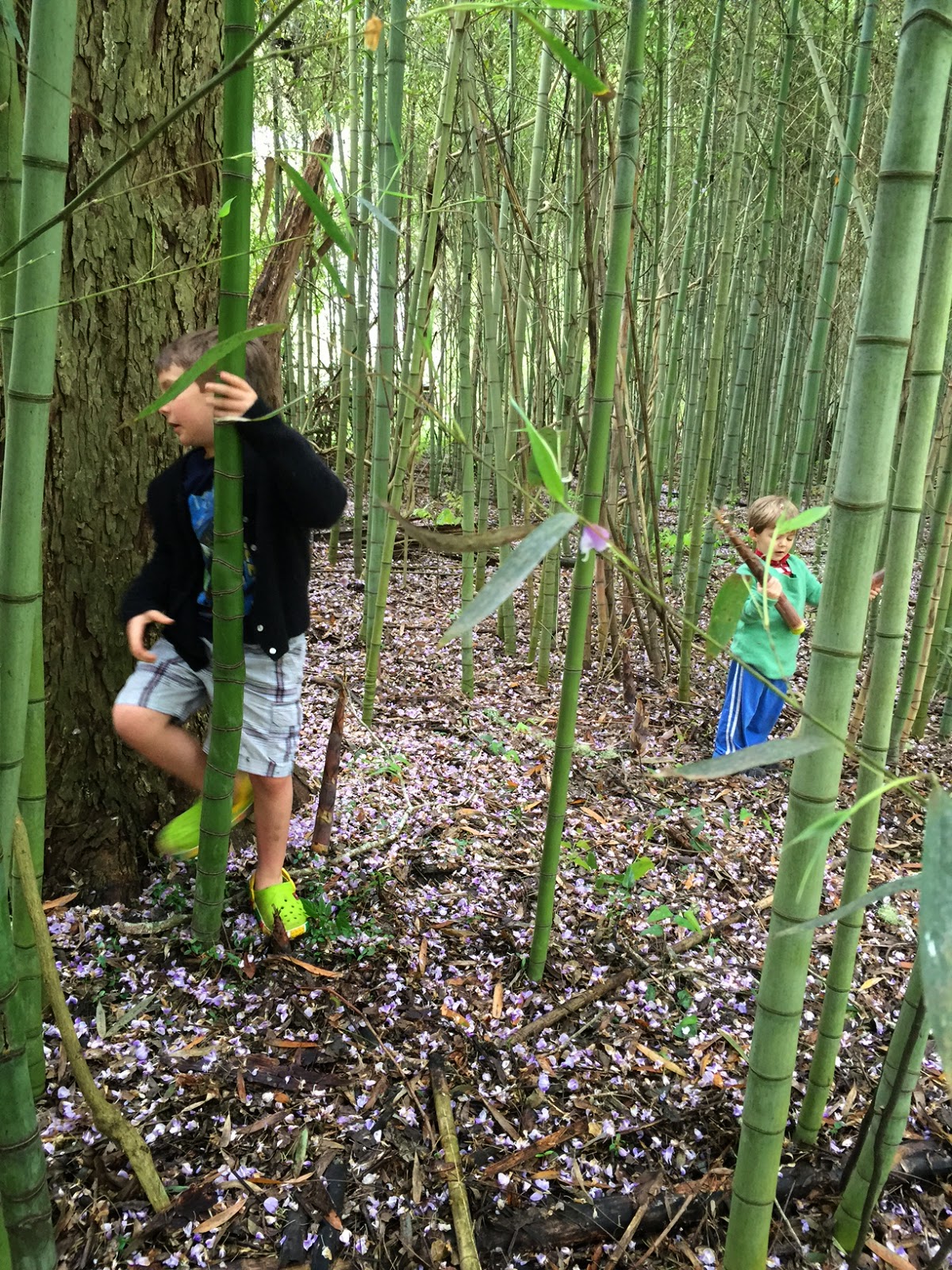 Boys in the bamboo jungle with wisteria petals. A bit of magic. 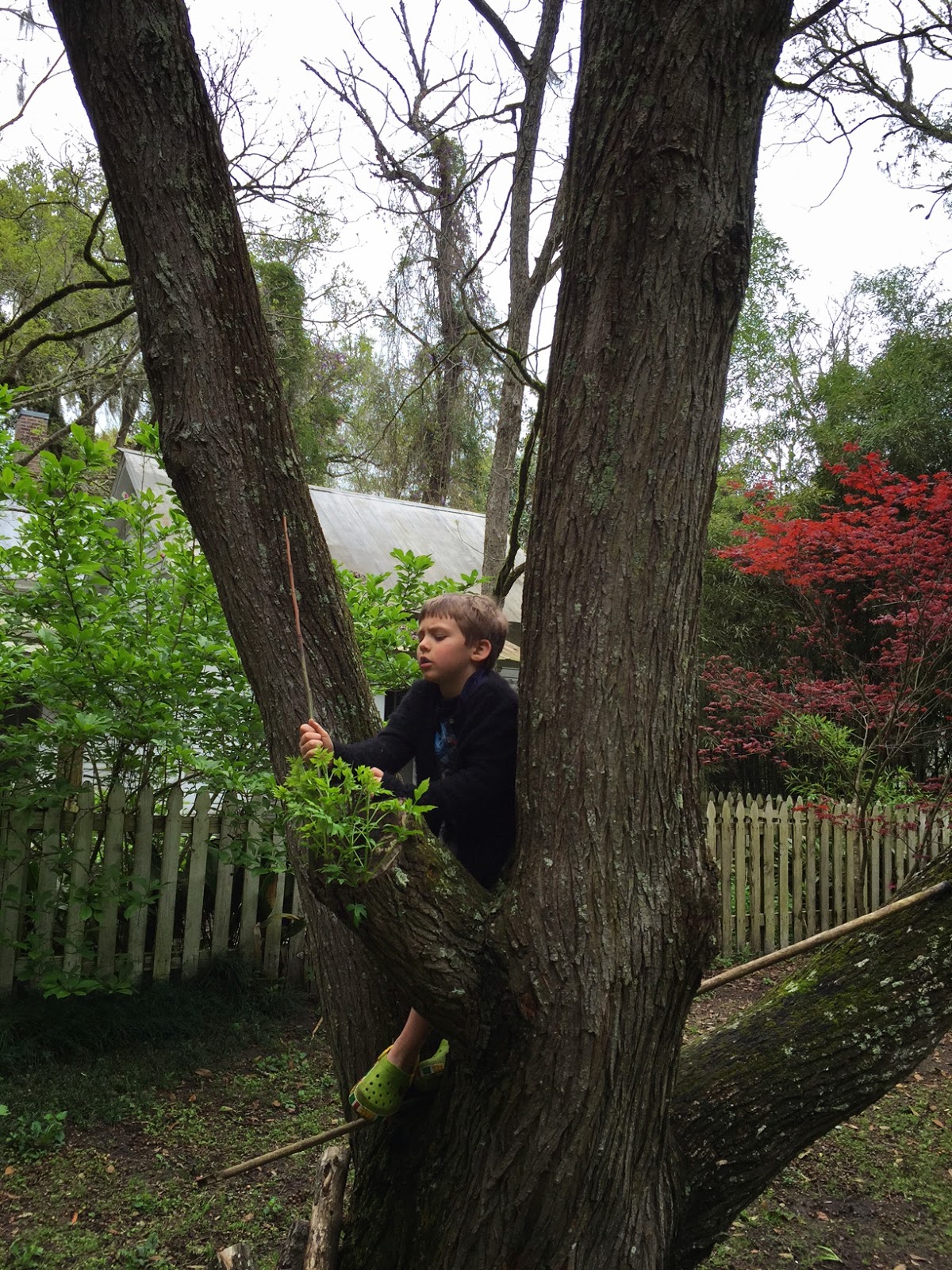 Owen in the chinaberry tree, playing something he's making up, involving a T-Rex. 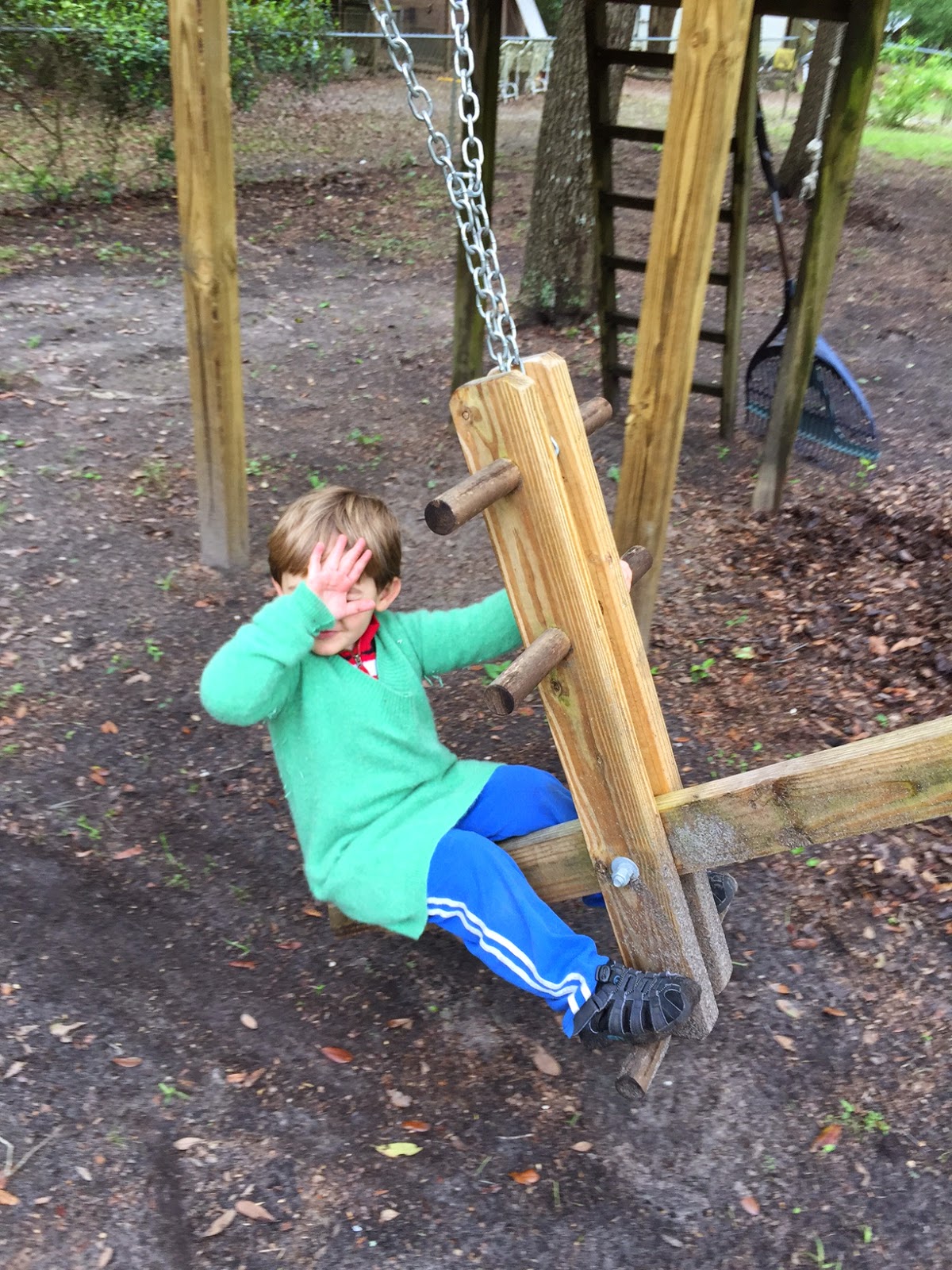 Gibson smiling behind the Paparazzi hand-block. "Higher!" he keeps saying as I swing him back and forth. "Higher!" He wanted to push me on the regular swing so I let him. Every time he hit my butt he laughed like a hyena in his old bluesman rumbly laugh. I would have let him do it all day but it's one of those stupid rubber swings that cradles your ass and rubs the side of my hips and hurts no matter how I sit in it. It's for kids. Let's face it. And I do not have a kid-sized ass.

Speaking of ass, Owen and I discussed different words for butt. He desperately wanted to say the word "ass" so I said it for him and then said, "So, do you know that there are so many words for ass?"
"No," he said.
I began to list them.
Derriere.
Bottom.
Buttocks.
Booty.
Butt.
Etc.

"You know," I told him, "you're not supposed to say ass."
He knows. He also knows I don't give a flying fuck if he does.

We walked down to Papa Jay's. I would not let them get candy today. So for a more healthy alternative, I allowed them to get Cool Ranch Doritos.
"Do you like Doritos?" asked Owen on our way home.
"I love Doritos," I said. "Everyone loves Doritos."
"Everyone?"
"Yes. Everyone, although not everyone eats them because they aren't very good for you."

They enjoyed them thoroughly. I had a few myself. They were delicious.

Owen stubbed his toe and it hurt him badly. I put ice on it and told his mama about it in a text. "Tell him he can go to the hospital if he wants," she texted back.
I told Owen that as he was limping about, using an old man's cane.
"Yes," he said. "I think I do. After I eat." The cheese pizza was in the oven. He was about to eat his appetizer of peanut butter toast.
"Well you know," I told him, "even if it is broken, they can't do anything about it."
"What?" he said, incredulous. "They don't put a pinkie cast on it?"
"No," I said. "It just has to heal back itself."

The temperature is dropping. Do you see that the boys are wearing some of my laundry-shrunken Goodwill cashmere? Gibson's sweater is clothes-pinned on the back of the too-big neck.
He told me that his toe, too, hurt. And that he wanted ice.
I got him an ice bag. He was surprised that it was cold. He decided he didn't want it. Now he's wearing a pair of giant wooden shoes around the house, clomping as he goes.

Their daddy has come and gotten them and taken them home. The sun is almost down. Mr. Moon and I are having a martini although he's outside, getting the grill ready for pork chops that I've had marinating in spices and Mojo and orange juice and garlic and lime and olive oil and garlic.

When Owen was sitting in the kitchen today he said, "Mer. I love your house."
"Really? What is it that you love about my house?"
"You," he said.
"What about all my decorations?" I asked him, looking around at the aprons and flashing star lights and Mexican roosters and stuff all over the place.
"I LOVE your decorations," he said. "But I love you the most." 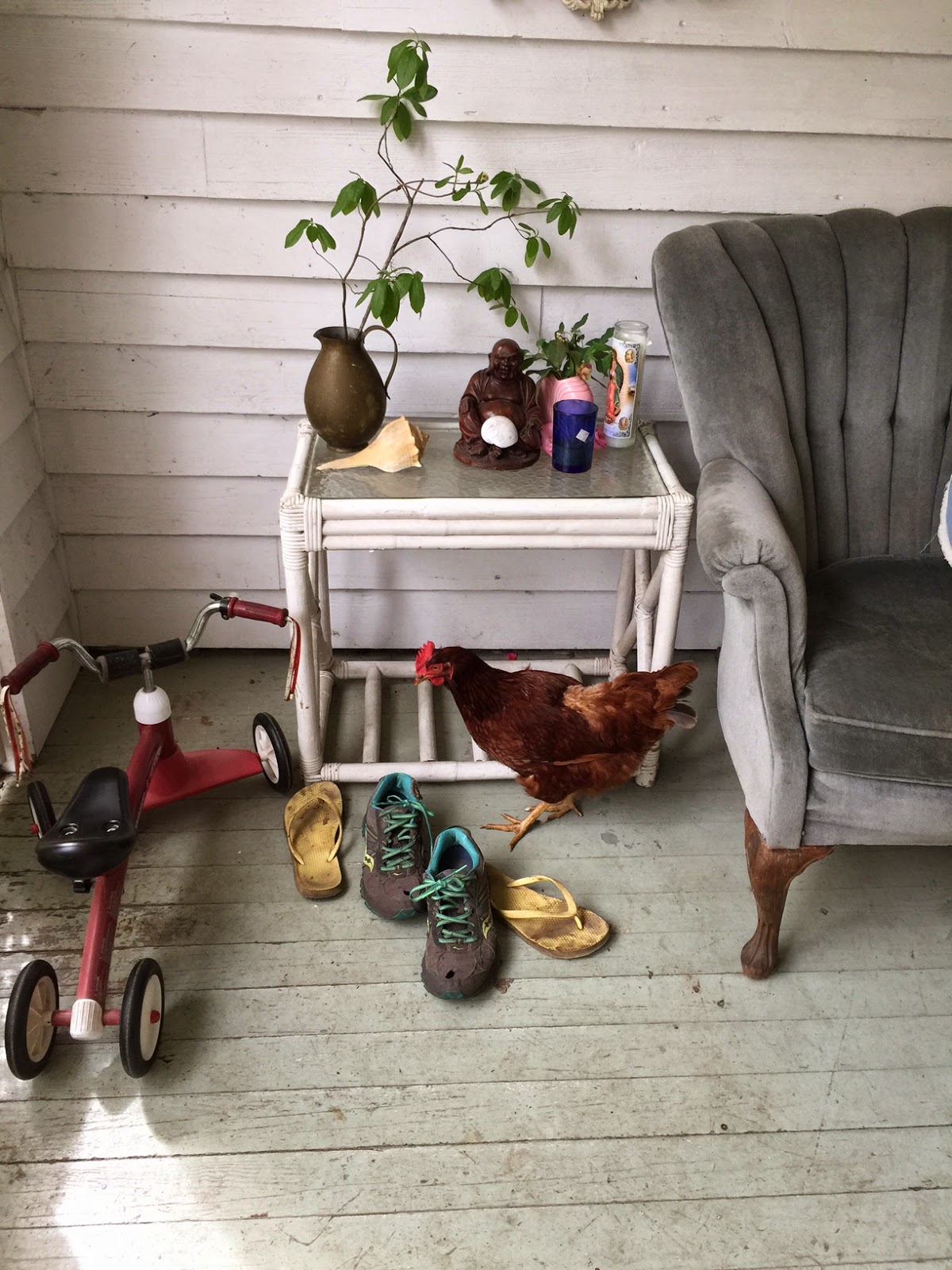 Miss Nicey on the porch. I left the door to the deck open and she walked right in and through the mud room and onto the porch. I let her peck around a bit and then I picked her up, which she allowed me to do, and took her back outside.

A good day. When I kissed Owen goodbye as he was in the car, I said, "It's been one of the best days ever, even though you hurt your toe."
"Yes," he said. "It has been."
And Gibson pulled my face to his and kissed me over and over until I finally said, "Boppy's going to come kiss you now."
And he did.

And after they left, I kissed Boppy over and over again.

This is what life can be.

Can you even believe it? I can't. And I'm living it.