Spiders And Snakes And So Forth 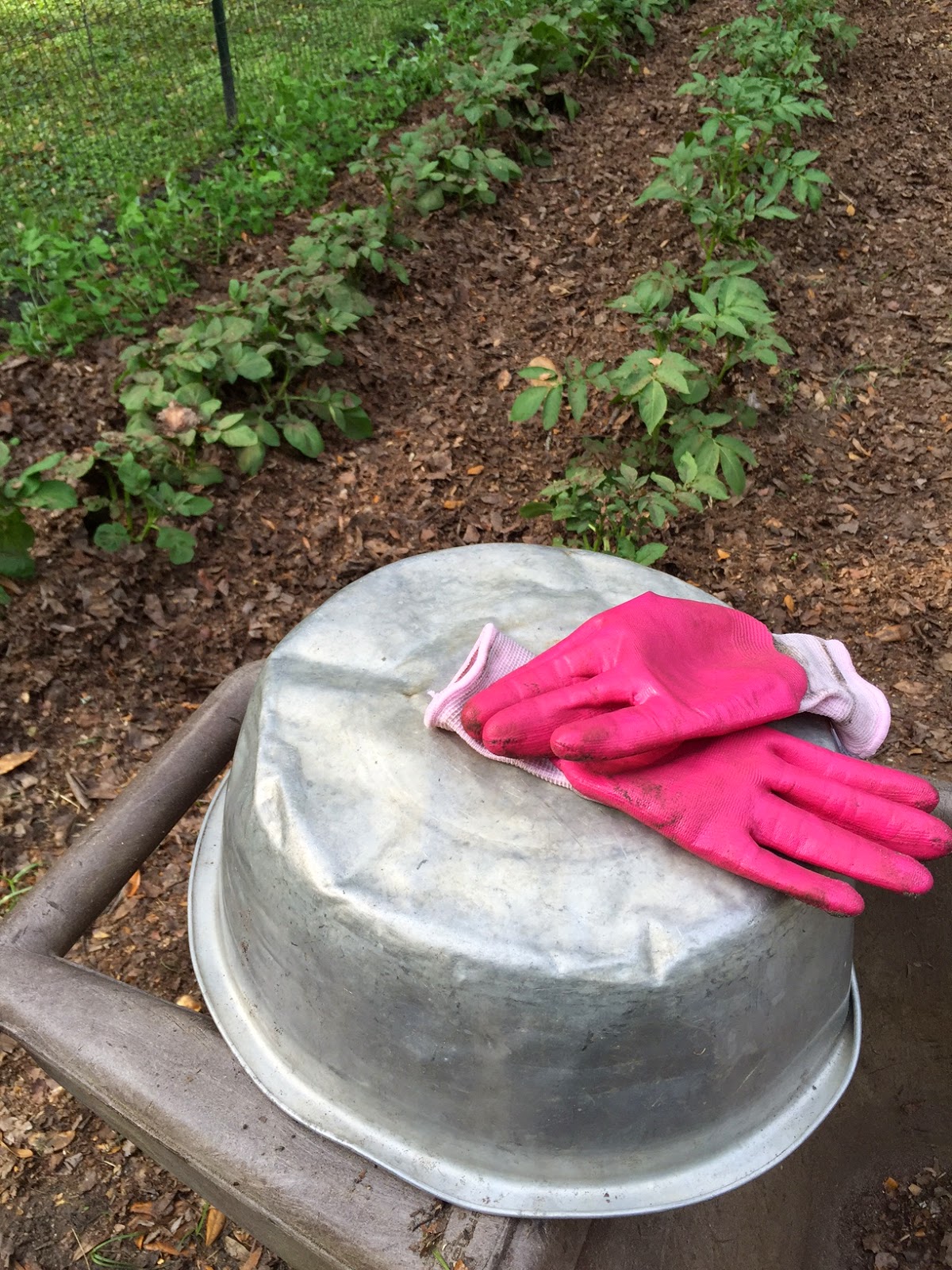 It's been another great day in Lloyd for me. I was lazy as all get out until early afternoon at which point I finally got off my ass after a delicious lunch of a piece of Toy Story birthday cake that I brought home with me last night.
I got out the duster thing on a long pole that we have around here and went after baby spiders. Turns out (I am learning a lot) that all of the spiders are encased in the finest webbing which is a beautiful way for the deceased mother to continue to take care of her young. That webbing with the babies wrapped itself around the bristles of the duster and I managed to unwind it outside by the huge oak out front. It was a tiny bit creepy, I have to admit. It was the finest, silkiest, stickiest web and would have prevented many critters from eating the babies. I have no idea what will happen to all of them now, but at least they aren't on my porch.

I watered plants and noted that my relatively ancient (older than Jessie) split-leaf philodendron which had not one leaf left on it a week ago, is coming forth with many tender leaves, unfurling and stretching out their fingers. I do love a split-leaf philodendron. I've given away countless pups from this one. It's a hardy specimen.

Then I went out and started weeding potatoes and then I mulched them with chopped up leaves that Mr. Moon had raked into piles in the back yard. I used muscle groups that I'm sure I haven't used in a good long while and I'll be sore tomorrow. La-di-dah. 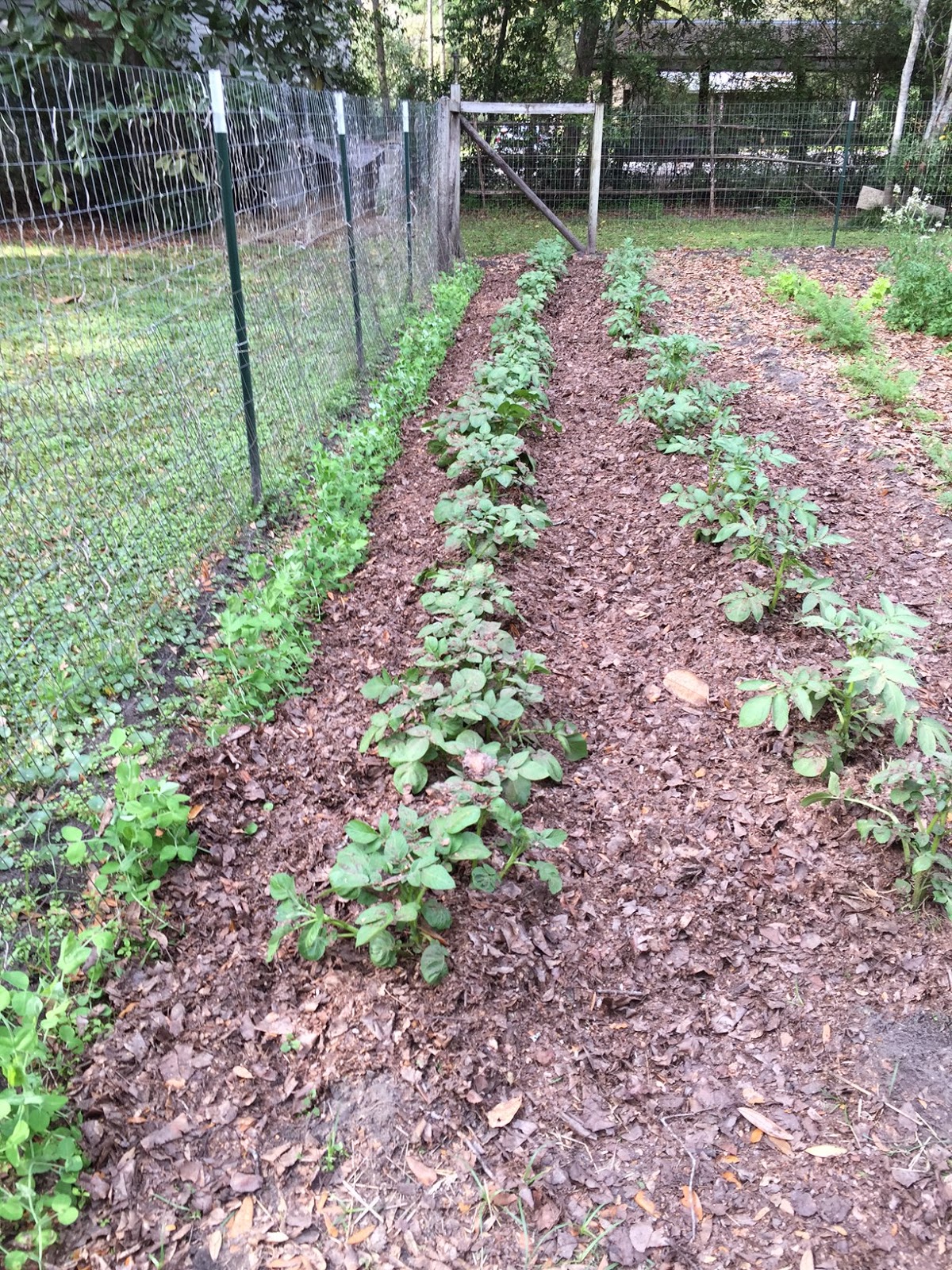 Is that pretty or what? Peas on the left, potatoes right and center. Nothing gives me quite a sense of accomplishment like a neat and tidy garden row.

I was thinking about cleaning out the hen house but then I went in there and saw who was back. 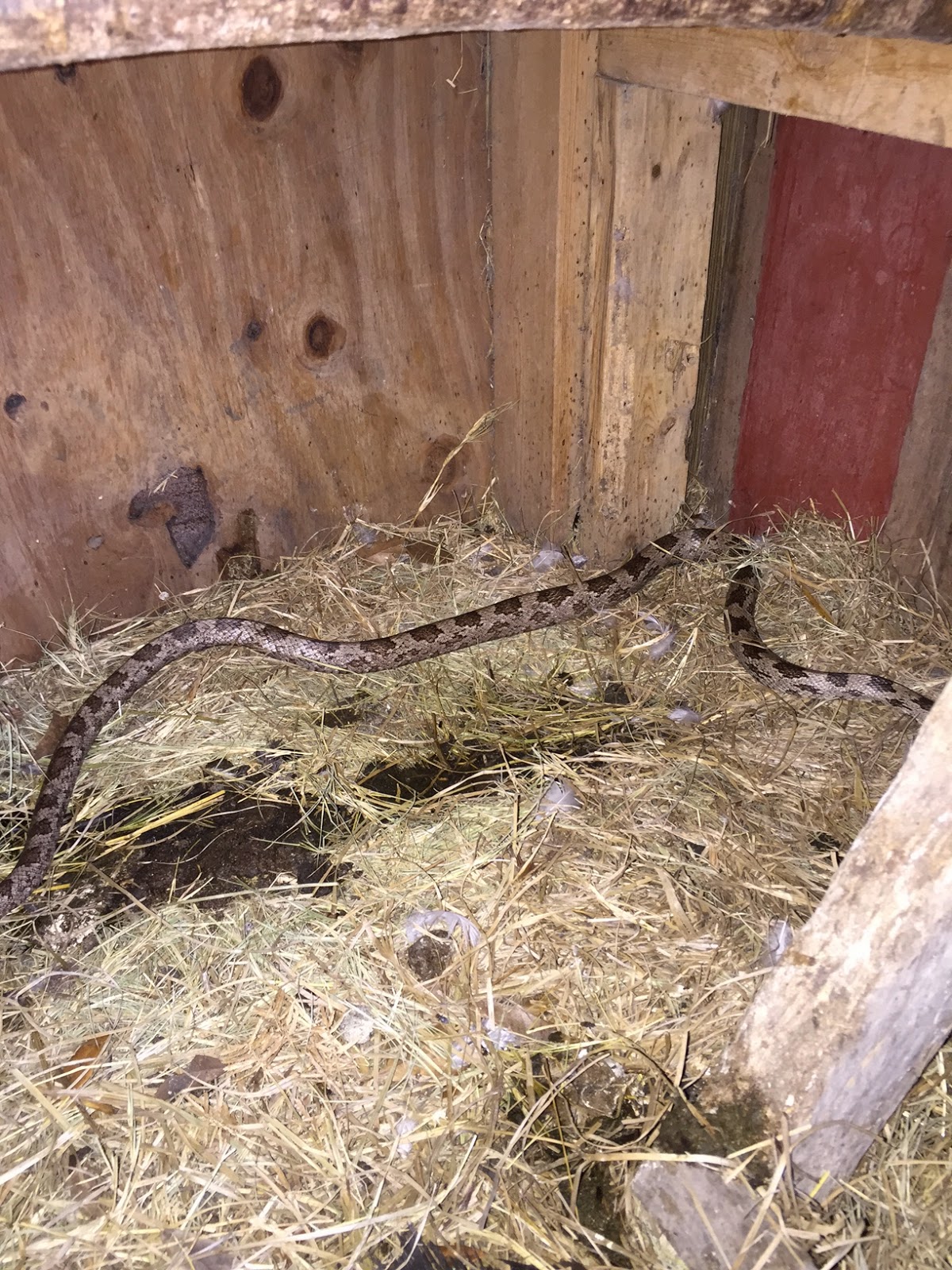 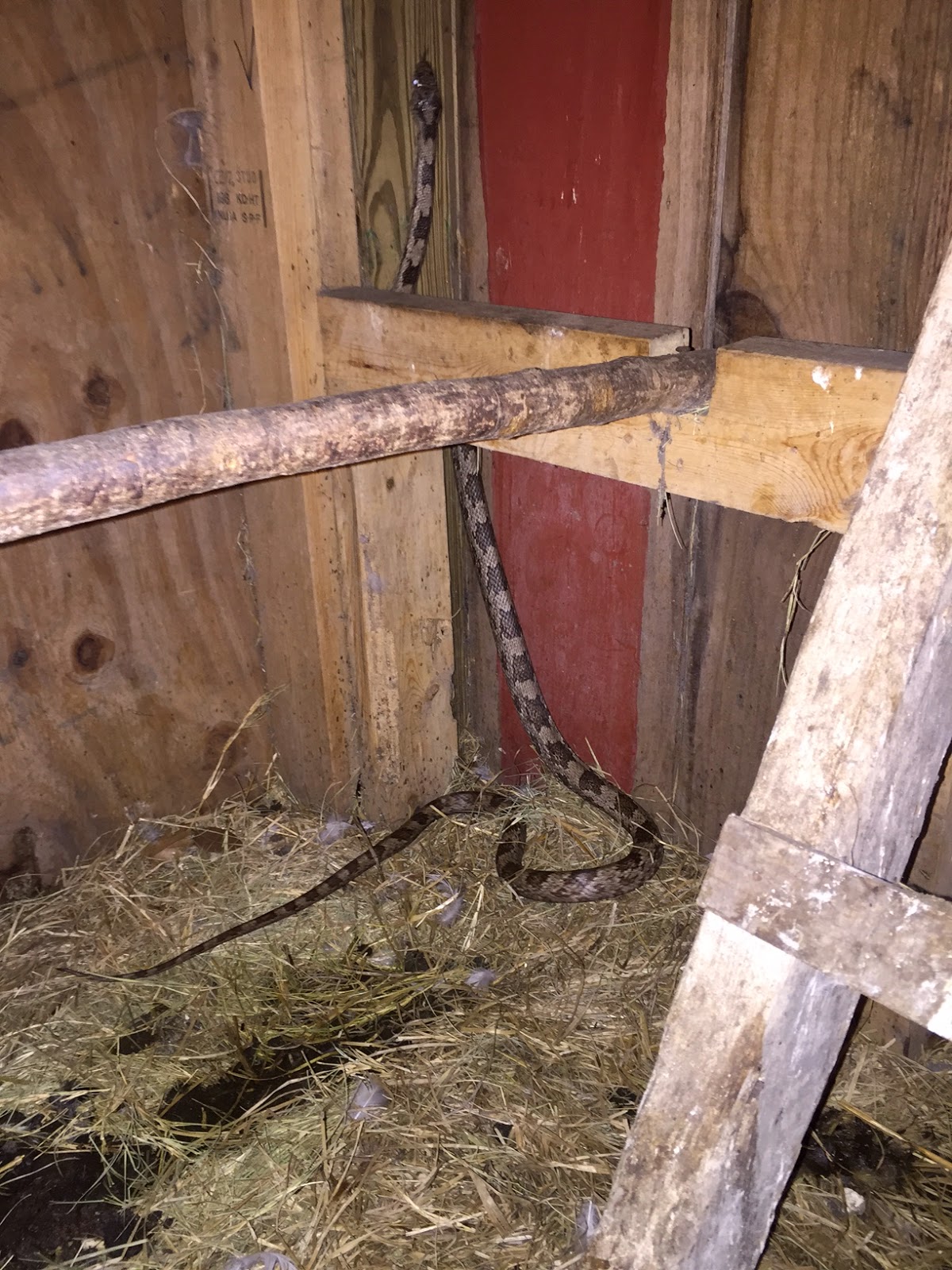 Look how long that sucker is!
He's just hungry. Can't fault him (or her) for that. I did not deal with the snake in any way, just let it crawl up and hide behind a board. Mr. Moon will be home tomorrow and he can grab it behind the head as he suggested I do last night and then do whatever he wants to with it. We won't be killing it because it's just an oak snake and for all I know, it's eating mice that come in to the hen house to eat corn but it will also eat eggs. When I talked to my neighbor this morning, he said that another neighbor had reported that she'd seen a rattler in her burn pile. Yep. It's time for the snakes to come on out and so they are. We have to be careful and watch where we step, where we put our hands. It worries me when the boys are out in the yard but they have sharp eyes and we talk about snakes a lot. I grew up with them everywhere, rattlers, coral snakes, moccasins. They don't really search us out to bite and are actually very shy unless threatened.
Which does not make me feel any friendlier towards them but it is the truth.

The sky is growing dark to the west. I would not mind if it rained again tonight.
I went and read the small print on that contest and now I do not care if I win or not. As far as I can tell, all one would be doing in the undisclosed location is to record the words, "Ladies and Gentleman, the Rolling Stones!" which may or may not be used for whatever purpose the sweepstakes owners deem appropriate. And get a videotape of the Rolling Stones and that would be cool but it's not like Keith and I would be tossing back vodka together and he'd be playing me tunes on his acoustic. So fuck that.
Dreams die hard, baby. Dreams die hard.

As I've worked today, I've been listening to Neil Gaiman's The Ocean At The End Of The Lane read by Mr. Gaiman himself. If there's anything more splendid than this, I am not sure what it is. It is not a long book so I am cherishing every moment of it.

I just went out and picked my salad greens for my supper. 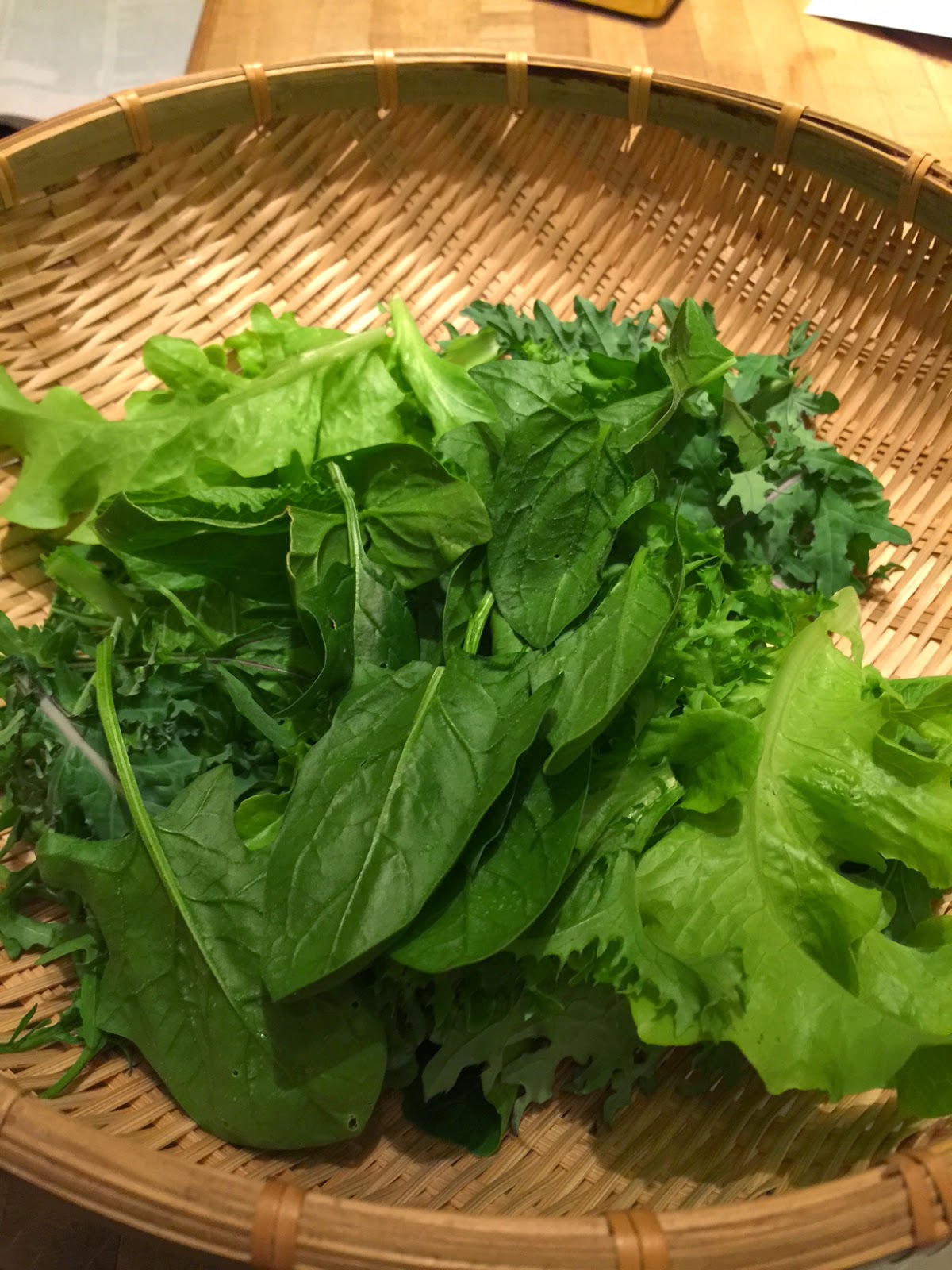 I figure I've got at most another two weeks of these. Well, gives me reason to look forward to next fall.

As soon as I got in the house, the rain began to fall. I stood on the porch, my hands set backwards on my broad, old-woman hips, digging my fingers into the muscles I've used today, looking up at the sky through the filter of new Bradford pear leaves, still-stark pecan branches.

"Have a blessed day," said Papa Jay when I'd made my purchase of bacon.

I have, up to and including not having to talk to the Jehovah's Witnesses who stuck a flyer in my door while I was doing something in another part of the house. I heard Greta bark and maybe that hastened them on their way.
Thanks, Greta. I owe you one.