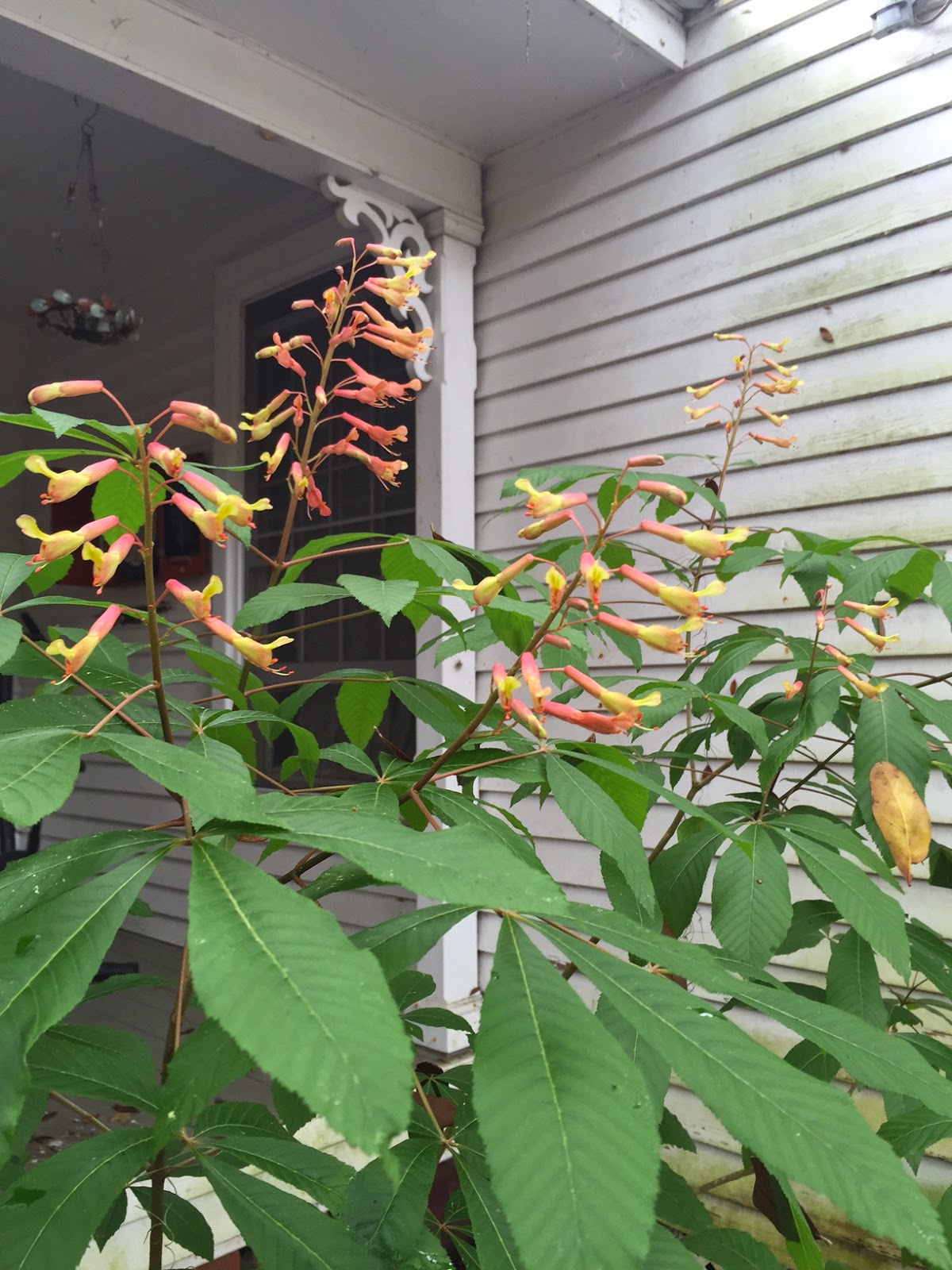 I have never seen Spring bust out as quickly as it's happening this year. I think I mentioned that the wisteria was starting to swell buds at the beginning of the week and by god, it's already starting to show purple.

I can't get a decent picture to save my life because the sky is dirty-cotton white and the glare interferes with everything. And my real camera is set on some sort of function that I can't EVEN figure out and I've got to go get that little booklet out which tells me how to fix it and somehow that's just not on my agenda for right now.
Not sure what my agenda IS right now, but that's not on it.

Anyway, that's the Buckeye up there, it's blooms at peak. 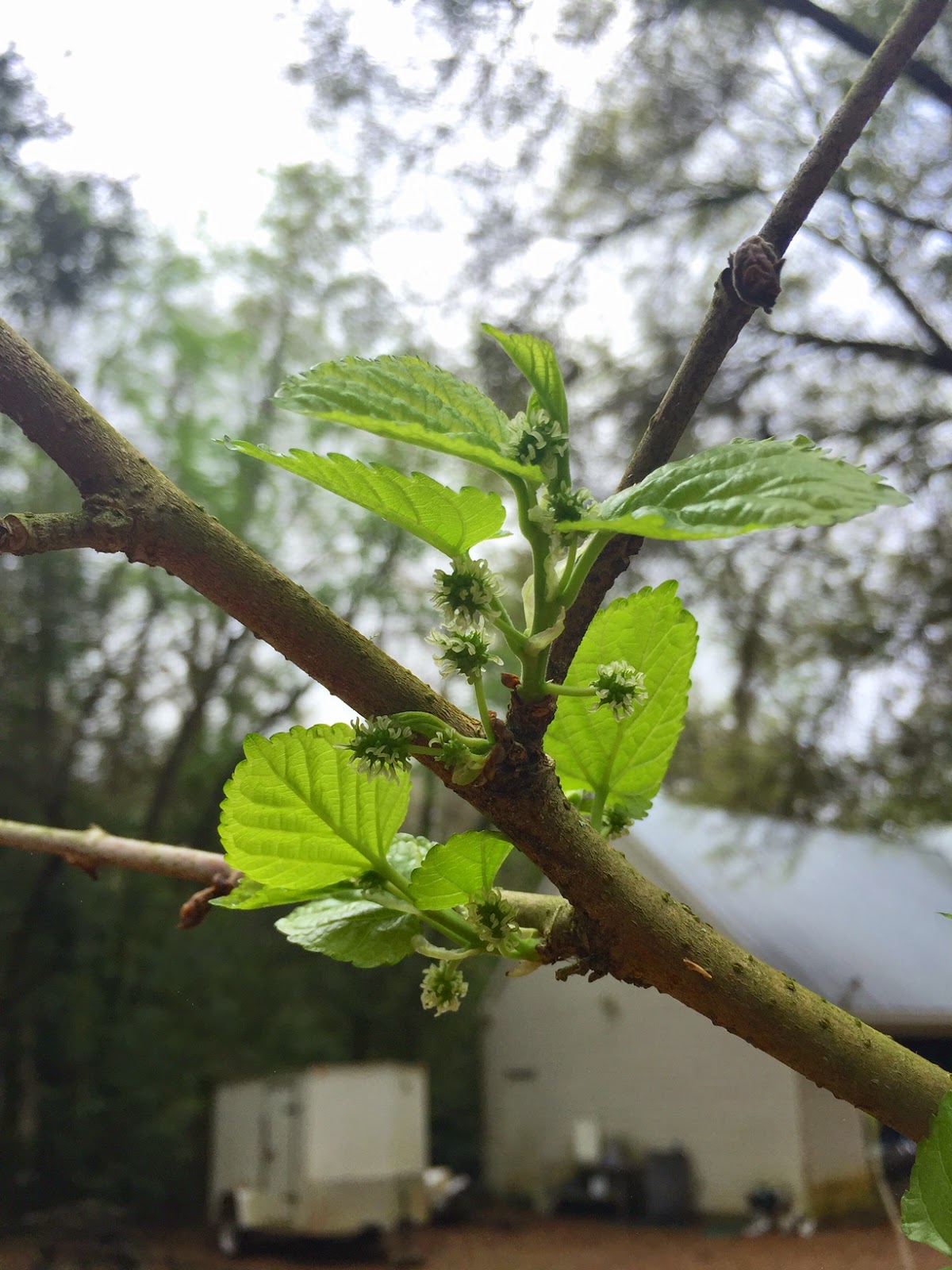 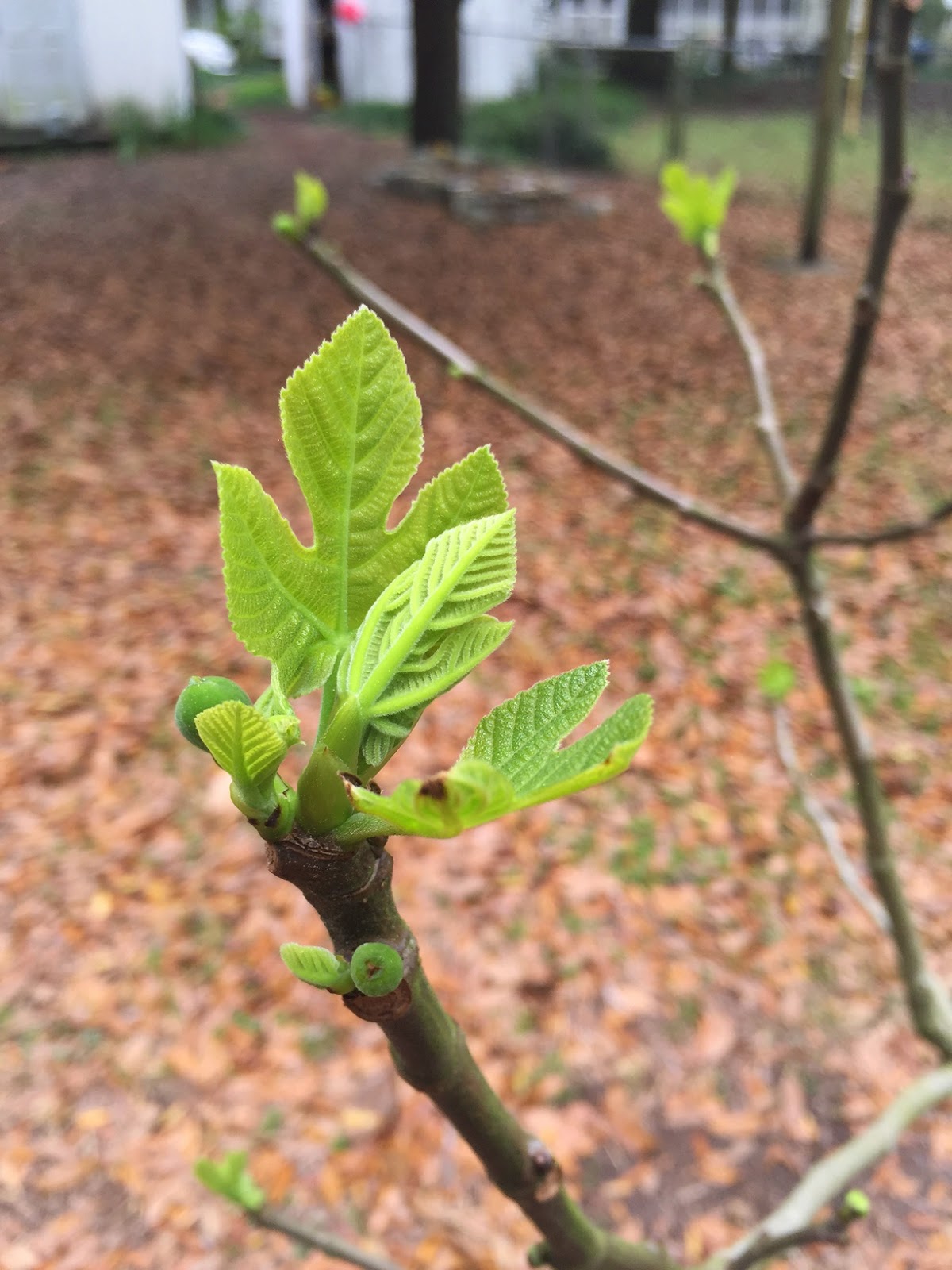 There you have the mulberry and the fig. That mulberry is growing like a weed and I think they actually ARE sort of a weed.

I'm being as lazy today as a human can be who is not actually asleep. Perhaps the energy of spring is sapping all of my energy. When I lived in Winter Haven, there was a little old man who used to pedal his bike home past our house every night. He pedaled so slowly that it was hard to understand how he kept the bike upright and he always had a cigar in his mouth. His name, as far as I ever knew, was Shorty.
We got some new neighbors at one point and I was talking to one of the sons (whose name, by the way, was Big Al) and he said of Shorty, "If he pedaled any slower he would be going backwards."
So that's me today. If I were moving any slower, I would be going backwards and since life is moving forwards (at least in this dimension) I suppose maybe I am moving backwards but this is one of those concepts best discussed by string theorists or someone of that ilk. Not me with my limited understanding of the Rules of the Universe.
And in that vein, let me wish you happy Pi Day which I was worrying a little bit about last night. I mean, if we could get all worked up about the world ending due to the Mayan calendar, wouldn't it make sense that the exact second that the date and time corresponded to one of the most mysterious numbers in the universe be even more symbolically dire?
Oh but wait. Pi may be a true and baffling constant but the date and time are more of a human-invented concept.
Okay. We're probably safe.

I better get to it. Whatever "it" is. I really do want to move all my potted plants back outside today that I can manage by myself. Trim them, repot some, fool around in dirt, even if it's just dirt in a pot. I repotted a bird's nest fern the other day that was severely root bound and as I settled it into its new home I could just feel it stretching its toe-roots, sighing with relief.
I feel almost certain that we will get no more freezes this year.

Mick crows and Elvis answers from another part of the yard. A neighboring rooster joins in. Elvis, Jr. I do believe.

Know what this is? 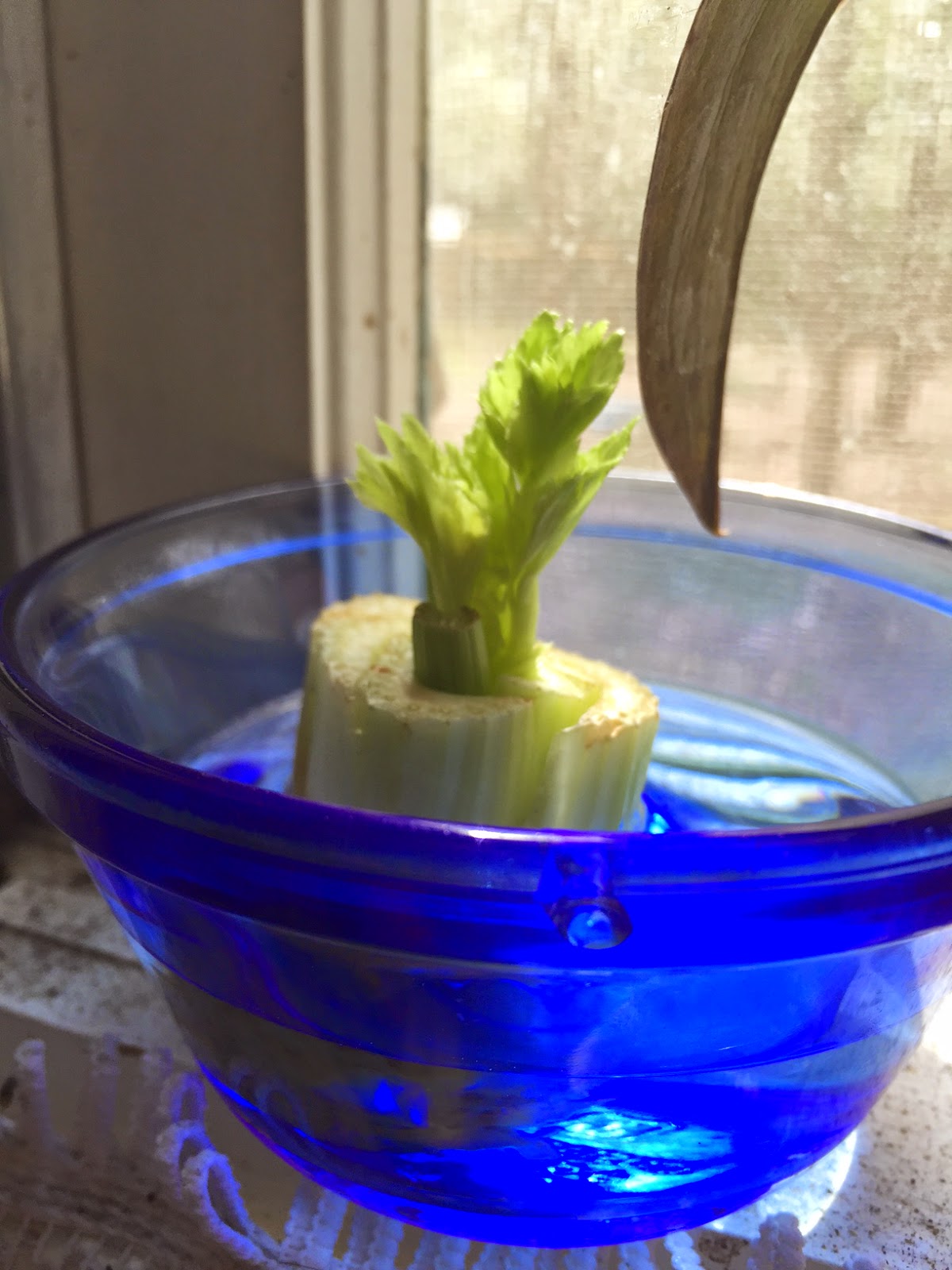 A tiny celery plant growing from the base of a celery plant. Know why I'm doing that? Because it's so fucking cute I can't stand it.

And because obviously I lead the most boring life in existence.

P.S. I just saw something I have never seen before in my life- two male (I suppose) vultures courting and mating with a female (I'm assuming) vulture in a tree in my backyard. Maurice and I both stood there, dumbfounded, watching. They made chuffing sounds and then flew off, their great wings spread as they headed to the swamp behind the railroad tracks.
It has never once in my life occurred to me that vultures mate and lay eggs but of course they do! Sort of like contemplating Dick Cheney having sex.
Sorry. I apologize to vultures everywhere. That was uncalled for.