Fun, Both Formal And In- 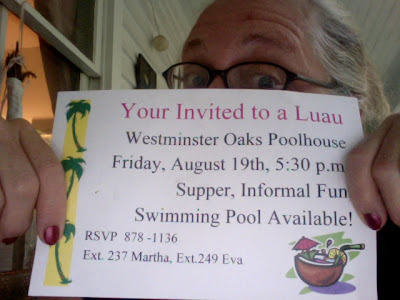 Oh boy!
I'm going to a Luau tonight where informal fun is promised.
What in god's name would "formal fun" be? I get the image of a Marx Brother's comedy with people wearing evening dress and being smacked in the face with pies.
Would THAT be formal fun?
"Your" invited?
Oh come on.
We can do better than this. Right?

Yep. That's my plan for the weekend. A luau at an assisted living facility.
The good news is that Owen is coming. Now there is nothing in this world that the elderly love more than a baby. Well, maybe they'd like a Metamucil and Vodka cocktail but I seriously doubt that anyone is offering those out at Happy Hour, although they SHOULD! Damn.
But back to the elderly and babies.
Yesterday when we took Owen to lunch we sat at a round corner table where we could keep him corralled. Sort of. And because is a wiggly almost-two-year old, he was a bit boisterous. There was a two-top next to us where two women sat, your quintessential Ladies Who Lunch. They were both highly toned with bicepy skinny arms (the kind I wish I had- let's be honest) and tanned skin and one of them had amazingly large bosoms for someone so damn skinny and they wore Serious Jewelry and so forth. One of the ladies kept looking at Owen disapprovingly, especially when he used the bottom of his booster chair as a drum. Owen drums on everything. If there is nothing else available, he will use his own belly. Boy loves to drum.
Anyway, I could tell that Skinny Lady With Possibly Enhanced Bosoms was NOT happy to be seated next to us.
Now one table away from her two women sat who were older. One pretty darn old. And she kept looking at Owen too, but with that look in her eyes that I recognize as one I wear myself when I'm around a child. The one that says, "Oh. I want to get my HANDS on that baybee!"

And when we left, that woman said to me, "What a darling child! And so well-behaved!"

Now THAT'S a grandmother.
I'll bet you anything that SWWPEB is NOT or if she is, her grandchildren live in Martha's Vineyard or perhaps even out in Sunny California and that she is quite happy to live a continent away from them.

But at the luau tonight there will probably be a roomful of grandparents and great-grandparents who would love nothing more than to get their hands on that baybee and I'll feel like the queen of the universe because he is MY grandson. Haha! Mine!

I will be honest and truthful here. I did not RSVP to that invitation. I put it off all week, thinking that perhaps that comet would hit the earth and all life forms, as we know them would be destroyed, thus eliminating any need to RSVP.
However, once again, it did not and so Mr. Moon is responding because I hate to make calls like that and as he said, he is wearing a headset and also, HE IS THE MAN!
He is my hero.

Last night he asked me to help him do something in the garage. A tool was involved. No, that kind of tool. One that looked like this: 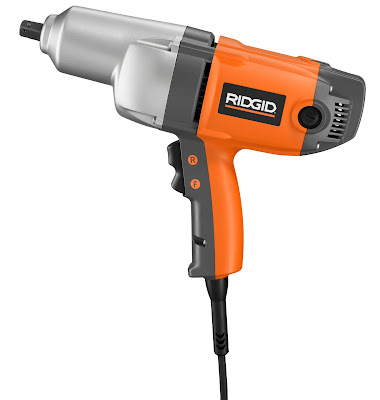 I am not even kidding you.

He went under the van he was working on and held a regular wrench to the bottom of a bolt and said, "Now," and I pushed the trigger on the tool you see above and it made a very satisfying and powerful noise and the bolt came right out and boy, oh boy, did I feel successful! I did that four times!

"That was fun!" Mr. Moon said as he crawled out from underneath the van.
"I've had worse times," I admitted.

Then I came in the house and finished the dishes and went to bed.

Well, that's how we have fun in Lloyd. One of the many ways, anyway. We also sit in chairs outside and look at the chickens. We also spend a lot of time looking for shit we've lost because we're old and we lose shit all the time. That's fun. Sometimes for fun I just go in my bathroom and watch my sink faucet NOT DRIP!
Okay. That's a lie. I don't do that.
But it does make me happy that it doesn't drip any more since Mr. Moon fixed it.
He's my hero.
Oh. I already said that.

Because I love him so much I might iron one of his favorite Hawaiian shirts for a more sartorial luau look. That would be fun. If I liked to iron, which I don't.

Mr. Moon and I are both yearning for a vacation right now. Together. Out of town. Out of the country. We need it. That poor man especially. He buys cars, he sells cars. He details them and fixes the boo-boos on them. He does the title work. He does everything. EVERYTHING! And he also takes care of my mother's finances and he's the one she calls for anything and EVERYTHING.
That poor man. The world depends on him. I swear.

And me? Well, I just want to have some fun. With him. Because we always have the most fun together. Throw us in Cozumel and leave us alone and we have FUN! We laugh so much. We love so much. We are like honeymooners who feel like we're getting away with something.
Which we are, which we do.

Well, it's not happening right now. We're going to have to have our fun right here.
We'll start tonight at the luau where we will have informal fun with our grandson.

And then maybe we can come home and have a martini and use some tools.