The chickens are out in the garden in weeds so deep and thick I am amazed they can get around. I only know they're there because Elvis's head sticks up and occasionally he crows.
It's not even that hot this evening. Nothing in this world is preventing me from going out there and tackling some of those weeds. It's at the point where we should do a controlled burn if you want to know the truth. But do I go out there and do anything about it?

I keep wondering if maybe I should give up gluten or something. Would that give me more energy? Maybe. I keep reading these things wherein people talk about their diets and how much energy they have now since giving up everything but sprouts and whey or maybe since they started exercising or maybe they...oh hell. I don't know.
I think what that says more than anything is that all of us are tired and looking for more energy. God knows you can't see a picture of a celebrity in which a Starbucks cup the size of the Sears Tower isn't being clutched by bony fingers at the end of a deeply veined and muscled arm, be that arm male or female. It appears to me that STARS use coffee to find that extra energy but of course they always claim it's some diet/and/or exercise regime. Show me a celebrity mom with four (or sixteen- hey Angelina!) kids and a full-on career and I'll show you a human being who is thinner than the stick on a cheap lolly-pop with eyes the size of bowling balls. And nannies. Lots of nannies. And personal trainers and chefs.

Okay. I need to stop with the similes. I know. I'm sorry.

I just realized today that I view everything through the lenses of me. I'm not sure how else I'd view them but still- as I have said before and I will no doubt say again- I am constantly thinking of what Anne Lamott said about feeling as if she were the piece of shit which the world revolves around. If you don't get that quote, you are not like me. You probably don't LIKE me, either, but that's neither here nor there.
For instance- Diana Nyad is, right this second, at the age of sixty-one! swimming from Cuba to Key West. In the ocean. Without a shark cage. With her own body. And on the one hand, I am cheering her on like crazy! YOU GO, Diana!
And on the other hand I'm like, Oh fuck. Another bar set in stone by someone older than me.

Annie Proulx's book? Hell, yah, woman! You build your dream house! You deserve it! And also...God, if I wasn't such a fucking waste-case I, too, would have books published and made into awesome movies and made a shit ton of money and been able to build a crazy-ass dream house and then written a book about it all!

But no, not me. I just sit here and do the bare minimum of human activity and not getting paid for it. I was in the Costco the other day and I was looking at the books/eavesdropping and I heard this woman talking about all the different sorts of retirement and social security she is getting and her shopping cart was filled with wine. Okay, mine was filled with beer. I am not casting judgment. I was just truly realizing how very little my life's work has added up to. At least in the monetary sense. My social security earnings would not keep a cat alive. I have no retirement fund beyond what Mr. Moon has purchased for me. But have I ever gone out and hustled my ass into a job? Oh sure, but never one that paid enough for Mr. Moon's eyelids to flicker with interest.

What am I saying here? I HAVE NO IDEA! I am a fat, lazy-ass as I said this morning, who is privileged enough to do things she loves out of love and who can't even get her fat lazy-ass out to weed the garden and who has no retirement funds and who wishes she had more energy and so maybe she needs to eliminate gluten from her diet and who views everything in this world as to how it relates to her.

I guess. I'm sort of confused too.

But I will say this- I am NOT the sort of woman who was in front of me in the line at Publix today in the Ten Items or Fewer line with fifteen items! No. I am not. If I have eleven items, I will not go through that line. I may have problems with energy and laziness and huge ego-ness but I do NOT do that.

I have my standards.

I wanted to smack that woman so bad. Especially since she kept looking at me apologetically and then casting her eyes towards the woman who was doing the check-out who is about eighty-years old and therefore sort of slow as if the hold-up were that woman's fault.
I just glared at her.
I may be a lot of things but I do not consider myself to be above the rules at the Publix check-out.

Does that mean that I don't entirely suck?

I sure hope so.

Well, that's all I got tonight. And it's for free and why anyone on this earth would care I do not know except that I think most of us probably feel this way, at least from time to time. That we don't have enough energy to do the things we should do and that all of the things we actually DO do don't mean shit.

Which leads me to my hero of the day, another man I have quoted here before: Mr. Natural. 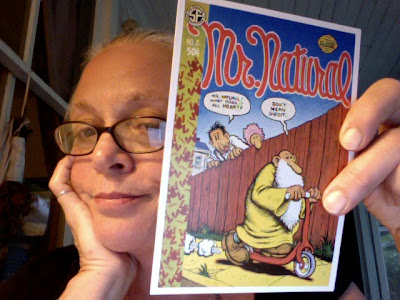 Thank-you, R. Crumb, for summing it all up so nicely.

I will now go shake-n-bake some chicken.

Gluten will be involved.