Lily texted me this morning saying that I didn't have to come with them to get haircuts but I never pass up a chance to see Ms. Melissa. She is just one of those people who make you happy. She's a gift to this world and we all adore her. And cuts hair really, really well.

So. Here are the boys. 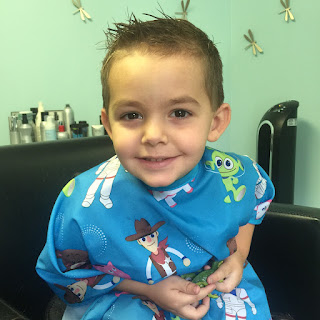 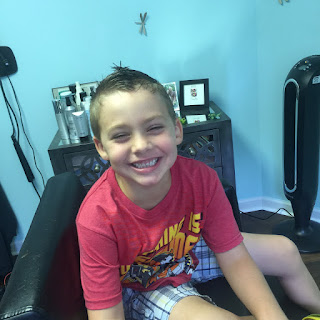 Owen wanted a faux-hawk as he generally does and she carefully created one which almost entirely hides the semi-bald area he created with scissors the other day. This is the third time he's done this. He just gets the urge. I think we can all relate.
But then he's really embarrassed. He didn't want Melissa to know but she assured him that this was not even the first time this week she'd encountered this same problem.
He got over it.
As you can see.

And then we went and had our really, really last lunch out before Owen starts school. We went to a pizza joint where you order your own personal pizza if that's what you want and we did. Trying to eat all healthy and shit, you know, I should have ordered mine without cheese but I did not. But besides that, it was pretty healthy. Whole wheat crust and all nice vegetables. And I didn't eat it all.
Although I could have.
What IS it about cheese? It is just so incredibly delicious. Name one thing that doesn't taste better with cheese.
I'm waiting.
See?
Meat, pasta, fruit, vegetables. They all taste so much better with cheese. Broccoli being the main example of this if you ask me. And it's pale, pale cousin, the cauliflower.

All right, all right. I'm easing into the eating-all-healthy-and-shit.
Last night Mr. Moon and I shelled about half a gallon of peas from the garden and I have them on the stove right now and I cut up and added one half of one piece of bacon to them.
They look like this: 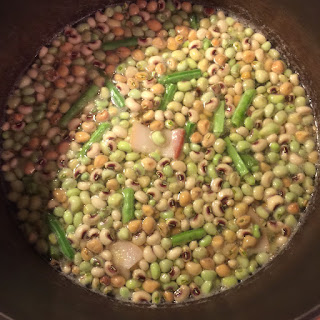 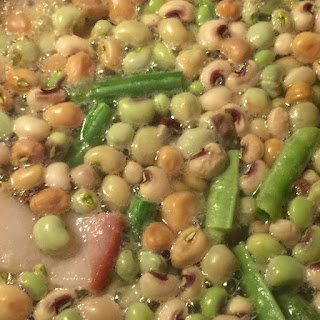 Crowders and purple hulls.
I grew those beauties! I will never get over the joy that eating what I grow gives me. It's like magic.

So. I have not found my simmer mats. I'm just going to order another one.
One.
Because if there's a simmer mat poltergeist in this house, I don't want to lose two again.

Mr. Moon's out starting a fire to cook some chicken over. Soon we will have a martini. The chicken is all free-range and organic and shit so I don't feel quite as guilty about eating it as I could/should. I have it marinating in mojo and garlic. Tomorrow I will use leftovers to make chicken enchiladas. Or at least what I call chicken enchiladas. I just tasted the broth from the beans and they are going to be heavenly.

I think about food way too much, don't I?

Well, we all have to eat. Might as well make it good. And as healthy as possible. As close to the dirt as possible.

One of the main characters in South Moon Under is a woman named Piety and I find myself thinking, "What would Piety eat?" Talk about eating local.
Piety would eat hog and deer and squirrel and fish and chicken and eggs and peas and greens. And sweet potatoes. Grits and cornbread, too, from her own corn. Gator if it came to that. Whatever she could get and grow to fill her belly. Cane syrup on whatever needed sweetening.
That's how people around here used to do it and although I am grateful that I do not have to limit my diet to those few things, I do believe that basically, those foods were fine and healthy and if she used lard as her grease, well, she worked it off, plowing her fields to grow her corn and peas and greens and sweet potatoes and cane to boil into syrup.

All right. I've gone on long enough.
I'm grateful for this day in which I got to spend time with people I love, in which I am spending the evening with the man I love, in which we are going to eat a very fine supper of good foods, many of which Piety would recognize.

All of this and I don't have to cook my beans over a fire nor make my own soap nor fill up giant pots with water to heat up to do my laundry in nor plow my fields behind a mule. It's like I have the best of all worlds.
Including a dishwasher.

Which I need to now go unload.