Rambles Down Streets Light And Dark 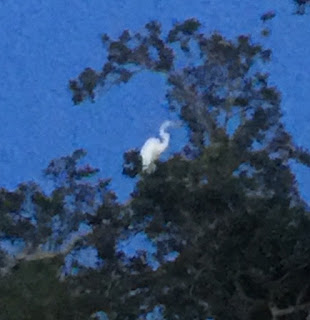 Last night as we walked back from the dock after sunset, I saw a great white heron settle into a tree to roost. There was no way I could get close enough to take a decent picture with my iPhone (and of course, I forgot the real camera) but that's the shot I got and in a way, I think it is truly lovely.

We've had our breakfast outside, watching two white ibis pecking through the grass for their own breakfast (river chickens?) and now Mr. Moon has cleaned up the kitchen. It would appear that this morning after he got up, the lawn guys got here and I completely slept through mowers and weed whackers, never knowing a thing. He laughed at me- I mean, really? How could I do that? And yet, I did. My dreams have been mere blurs, not a one of them disturbing enough for me to remember.
Peace.

Not sure what we're going to do today. A few days ago we drove down to Stuart, Florida where there are two museums I visited as a kid.
One is The House of Refuge which is basically an old house built on the narrowest spit of land between the Atlantic and the Indian River where the government paid a caretaker to stay and walk the beaches after storms to find people who might be shipwrecked and then to bring them back to shelter. There were, at one time, ten of these houses on the coast of the Atlantic, but this is the only one left. 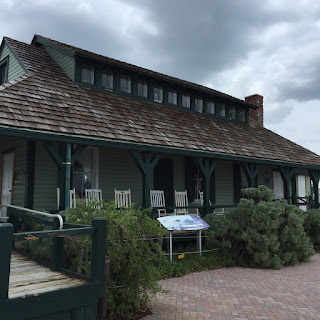 Four hundred dollars a year these men were paid and their nearest neighbor was thirty miles away. Fresh water was provided by a cistern which held water collected from gutters via the roof of the house. A trip (by river) to get provisions took two weeks. There were no roads but there were bears and panthers and plenty of bugs and snakes. And storms. Some men brought families and women tended and educated children out there in the middle of nowhere and had babies by themselves and lived lives.
I can't even imagine.

The other museum we went to was Elliott's museum and it has grown exponentially since I was a child. But I was charmed to pieces to find some of the same exhibits that were there fifty years ago. 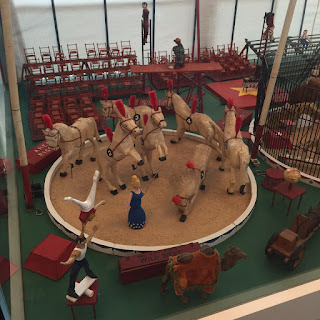 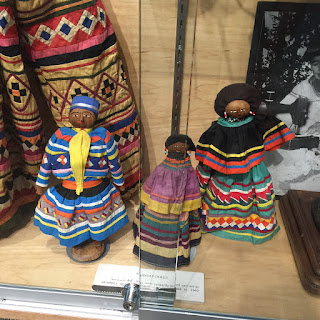 That day was a good one, as they have all been here, but it was a day of very sharp contrasts. We drove down to Stuart on A1A and where there used to be nothing but jungle, delineated on one side by the Indian River and the other by the Atlantic Ocean, now there are huge, huge mansions and gated communities of mansions and one can only wonder at the wealth represented there. Most of the places you can't even see as the jungle has been tamed and trained to cover all but the almost-hidden entrances with domesticated sea grapes and bougainvillea.
And then, coming back, we drove through some of the poorest and most poverty-stricken areas you can imagine, mere miles from the wealth. These areas are inhabited by the workers, I would assume, who do the gardening, the house-cleaning, the building, the road-clearing, the jungle-taming. Little Haitis, Mexican grocery stores, pawn shops, beauty supply shops- all of them with barred windows.

This is Florida too. And has always been this way as far as I can remember. There was strict segregation when I was a child and the black community was between Sebastian and Melbourne and many of the now-celebrated Highway Men artists came from that area. There was even an area of the beach where black families were "allowed" to swim.
Where there are rich white people, there have to be poor people of color to do the work that makes the life of the wealthy sweet and easy.
And it has not changed much, has it?
If at all.

Well, most of the white people I knew here in Roseland were not rich. Not at all. The most "well-to-do" that I knew personally were people like my grandparents, retirees who lived in what amounted to cabins without air-conditioning, socializing together over games of Canasta and the Power Squadron and Women's Garden Club and the occasional supper out to the only local restaurant which had, as a speciality, a hamburger and fruit salad. There were fishing families, poor as dirt, and the poverty extended to every sort of horror there could be which springs from that. Alcoholism, family violence, abuse. I remember a teacher of mine who made dresses for the daughters of one family and then delivered them under cover of night, anonymously, so as not to offend pride which was one quality of which there was no shortage but it was a mean sort of pride.
There were also also the "regular" middle-class folks, who, looking back, barely had two pennies to rub together. Families of seven, supported by a barber daddy and a mama who did seasonal work in the citrus packing plants. Cars were old, houses were shabby, luxuries were unheard of. Clothes and mended fishing nets hung from lines, boats were made by hand, the knowledge of it all passed down from daddies to sons. Men squatted on haunches to smoke and talk, hours on end. Women gathered in kitchens to talk about the men, the children, to laugh when they could, and they did. And the children ran mostly wild in the jungles and dirt roads. We squatted in the sand and played marbles, we climbed trees, we fished, we played War in the woods, we rode our bikes to wherever our legs would take us and no one worried unless we didn't show up for a meal. Dogs ran free and ate at everyone's back door, often dragging home with a snout full of cactus needles.

So. That's me, rambling on about it all. And I still don't know what we're doing today and I don't care. Whatever we do, it will be fine and good.

One more picture. Having nothing at all to do with Roseland. 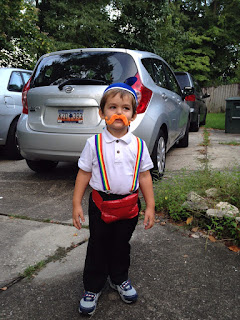 I miss those boys.
I'll be seeing them soon.
But right now, here I am, between and amidst worlds and time and ages and dreams and memories and experience.