News From Near And Far

I'm trying to talk myself down from the ledge of despair I'm on this morning. Some days, I just wake up there, clinging with my fingertips. Don't know why.

Mr. Moon's been up for hours, getting ready for his gator hunting trip. He's so happy, so excited. Meanwhile, I'm about to have a stroke because I can't get my glasses clean and I'm not ready for this baby shower and Lis is coming to spend a few days with me and my house looks like it's being occupied by an insane day-care provider who doesn't own a broom, a mop, or any dusting equipment. We won't even go into the mold and mildew and spiders which have all just taken up residence here and are multiplying at the rate of salmonella in beef broth under ideal lab circumstances.

I'm going to get the boys again this afternoon. I did the pick-up with Gibson yesterday and when we got to the end of the line where the kindergarteners are all waiting, I did not see Owen and had a moment of panic. He was right there, of course, lined up along a wall where I couldn't see him. This pick-up thing is controlled chaos.
"Move forward, move forward!" they kept telling me as they tried to locate my grandson.
I hate to sound like an octogenarian telling his grandchildren how he had to walk nine miles uphill both ways to school in the snow but shitfire. When I was a kid, we either walked to school or rode the bus.
"Hey! It's only two miles! You're six years old now. Stop whining! Here's your lunch money. Don't lose it."
Okay, I realize the very different logistics of things these days but does EVERY child need to be picked up by a harried parent or grandparent in an SUV? It would appear so.

Oh well.
So. Did you hear any of Jimmy Carter's discussion of his cancer yesterday? I swear to you- that man is one of my most, most sacred heros. In my mind, he is a holy man. The only thing he really wants, he said, is for the guinea worm to entirely die before he does.
I think he was sort of joking but sort of not.
The concrete and real good he has done for humanity is unbelievable.

Meanwhile, Donald Trump is leading in the polls.

We shall not be discussing that this morning.

So how about that Ashley Madison adultery website?
"Life is short. Have an affair."
That was their motto.
How in the world does anyone think these days that they can get away with stupid behavior like having an affair via a website?
Josh Duggar.
Well, there goes the stake in that family's ability to make a fortune flogging their Christian values. I think everyone is a bit weary of the "Oh, I am a sinner. Please forgive me," bullshit.

Jared.
As May and I agreed- dude has always been creepy. When Subway first brought him out as their spokesperson we thought, "Subway! That guy is weird and creepy. This the best you got?"
The heat of the anger I feel towards anyone who abuses children is like that of the surface of the sun. Well, he's going to jail.

Okay. Time to quit procrastinating. Time to actually do something.
All will be well. I know it.

I just looked up to see Mick "fertilize" Nicey. The whole deal takes far less time than it does me to write that sentence. He jumps on her, wiggles, jumps off and then does a little dance around her. She barely had time to stop scratching for bugs.
No need for cheating websites for roosters!

Well, whatever. Off to make deviled eggs. Which are all probably nicely fertilized. 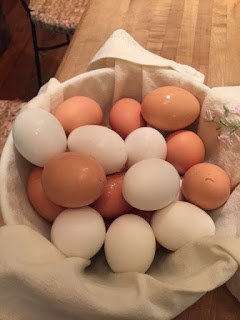