I am having melancholia tonight. We leave day after tomorrow. And I miss my baby boys, I miss my own babies, I miss my...well. I miss my bed.
Although this one is not so bad. Not bad at all.

We ate lunch in Vero today at a restaurant I have passed one million times but never had a meal in. It's the Patio Restaurant and it was decorated by Vero's most famous eccentric, Waldo Sexton. 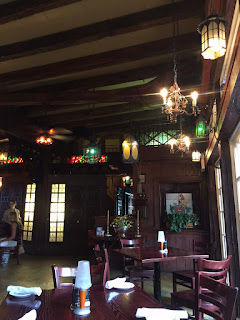 The restaurant he built on the beach, The Ocean Grill, is one I have written about a lot.
I think I may have have gotten my sense of decor from Waldo.
He was the kind of guy who once told his daughter, "Wait right here, I'll be back in a minute," and who then disappeared for a week. He was a treasure hunter, a dreamer, an off-the-cuff architect who had no plans and shouted directions for his builders from the beach as they built his hotel, his restaurant.
And yet, his structures have withstood not only time but hurricanes and the shifting sands of Atlantic whimsy.

This area is filled with the history of people like that. Impossible dreamers. There's a boat ramp and small park near here named for a guy named Dale Wimbrow. This is a name I will never forget and yet, until yesterday when we took the boat cruise, I never knew a damn thing about him. It turns out that he was a poet, among other things. Not a great one, but still...
And they named a boat ramp after him.
You can read about him here.

I always heard that Mark Twain had a house in Roseland. There's even a house about five hundred yards from where I'm sitting that, as I recall, was said to be his. I have no idea if this is true.
But I do know that this area has always attracted the artists, the outsiders, the dreamers. The ones who did not fit in anywhere else.

Well, I'm going to heat up some leftovers. Yes, we've been here long enough that I have leftovers to heat up. We were actually going to go to the Ocean Grill tonight but I just didn't have the heart to leave the sunset to dress up and drive the ten miles to Vero.

Maybe we'll go tomorrow night. I do love that place with all of my heart.

Here's another picture from the lawn behind the dock. 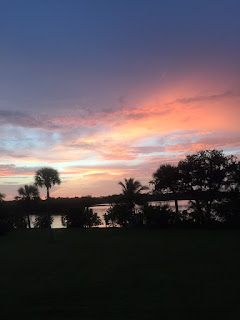 I hear that the top ten Republican clowns are debating tonight. Do I want to watch that bullshit?
Oh honey. I think I'd rather slip into the lion pool and float about, watching the sky.