Verging On Hysteria, Happy To Be

Today has ended up being one of those days that would provide material for at least three thirty-minute sit-com episodes. Even as it all happened, I was thinking, "This is hysterical."
Even though on the surface, you know, it definitely was more like chaos and insanity.

The boys are on their way home and one thing that is not funny is that Gibson appears to be coming down with something. I noticed he wasn't begging me for food although he did eat some chips and a small bowl of Cheerios. As the hour got later, Owen asked me if I'd make pancakes and bacon, which I did, and Gibson would not even eat one piece of bacon. Owen ate quite a bit. "I'm a hungry man!" he said. But Gibson turning down bacon? Nah. That ain't right.
And then he started feeling warm to me and I realized he'd been clingy all day. He needed me a lot. He kept rubbing his head and I asked him if it hurt and he said that it did. And I feel so bad for him and for his daddy who opened Publix this morning at god knows what crazy hour and worked until after six and also for his mama who has to close tonight and will be worried the whole time.
I gave him some children's Advil and he said that it gave him energy and so we shall see.
He slept while we were waiting for Owen. 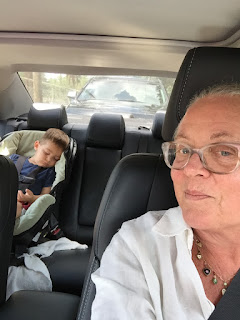 But he sure did kiss me a lot today. 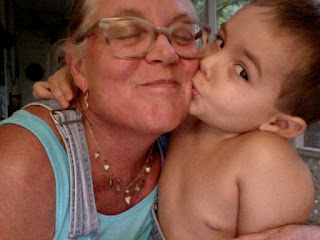 He wanted us to do a photo session and so we did and he wanted to kiss me in every picture.

Owen was his regular self, full of games and pretending and he put together a jig saw puzzle that I got him at the Dollar Store in about three minutes. He wanted me to play a game where he was my husband and we had a baby.
Here's the baby. 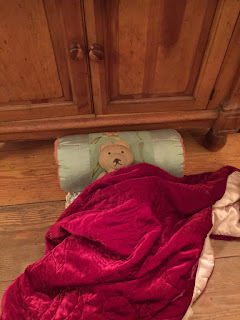 I was making pancakes and answering the phone and texting and okay, I wasn't being completely attentive. After awhile he said, "Can we break up?"
"Are you tired of me already?" I asked him, standing over the stove with a spatula in my hand.
"No. It's just a little embarrassing," he said.
"Sure," I told him. "But I'll still make you pancakes."
"I'm taking the child," he said.
"All right," I said.
He also told me that he didn't like me looking so sad when Boppy left.
"You'll get some time to yourself," he said. "You won't have to make his dinner. You can eat it all yourself."
"But I kind of like to make his dinner," I told him.
"Because you love him so much," he said.
"Yes. And because I like to cook."
He understood.

And here I go to try and create some order and wrap some presents and do whatever it is I think I need to do and it's very reassuring in some way, comforting, too, to realize that no matter what I do or don't get done, the world will keep on going. May has Jessie's shower under control and it's going to be so sweet to see everyone tomorrow and to watch my daughter be, yes, showered with love. Lon and Lis will love me even if there is dust in the corners and mildew in the showers. Their sheets are clean and so are their towels. I can't wait to see them.

Bottom line is- I am the richest woman in the world in every way that matters. And as far as I know, Keith Richards is still alive.