It's Saturday night and all is well and all is right, right here in Lloyd. The rain has ceased but the sky's still gray, gentle silver with the setting sun behind the clouds.
It's been a fine and cozy day and there was a nap on clean sheets and I'm thinking my sweetheart is just about all rested up.

The beautiful roses he gave me before he left finally bowed their heads in defeat today and I gathered them and the zinnias that were with them in vases on the hallway altar and took them outside to become one with the earth again. The chickens, who were sitting on the kitchen porch 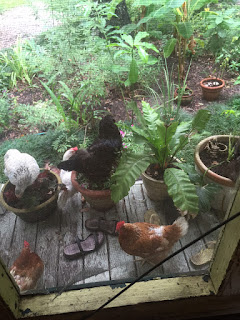 followed me out to the flower graveyard and petals dropped as we walked. They thought that perhaps I was carrying them a treat, although sadly, I was not.

Perhaps, though, the rose petals inspired thoughts of romance in Mick because he jumped on Camellia and for once, I had the phone-camera at the ready and took this picture. 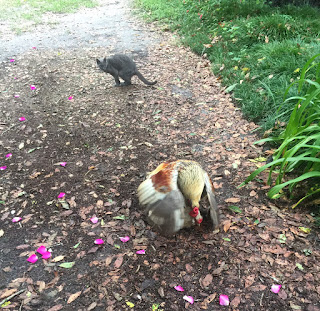 Breathe in, breathe out. It is done. Luna looks on.
The way roosters take their hens with their wings spread over all reminds me so much of Dracula, spreading his cloak over himself and his victim. 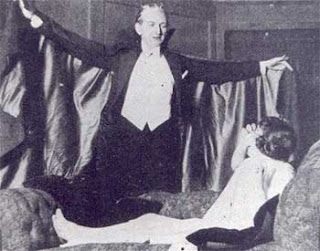 The rooster even bites the neck of the hen as he fucks her and no, it is not pretty but as I have said, it is quick. I have a strong feeling that the early directors of the Dracula films grew up around chickens and as a child was terrified and haunted by their sex.
At least the rooster does not take the hens' souls nor does he leave them as the undead. They merely ruffle and rearrange their feathers and get on with life.

And so it goes. I hear a hawk calling and Mick has responded with a warning to the ladies to watch out for predators in the sky. I have the soup warming up and have cut new zinnias to replace the dead flowers. 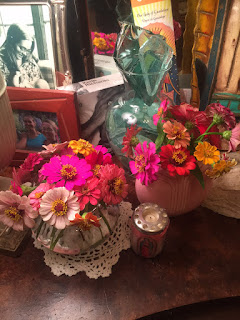 I will be so sad when they are all gone. There is absolutely nothing that says happy in a visual way like zinnias. When I was cutting them, I noticed that there are even more purple hull peas to pick. Perhaps we have not eaten the last of them quite yet after all. I have a huge yearning to get out in that garden and weed. If tomorrow affords me the possibility, I will do that. 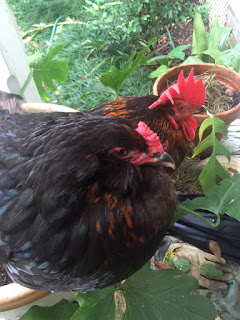 The two old sisters, Mabel and Trixie, sitting together in a pot of split-leaf philodendron. How I love their dinosaur eyes, their dinosaur feet, their dinosaur gait, their soft black feathers. If dinosaurs really did have feathers then there is nothing I would love more than to be able to go back, back, back in time to see one, glinting and shimmering and iridescent in the sun which still rises every day on this planet which has seen so much.