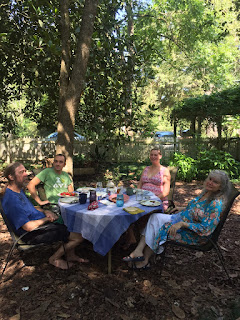 Could these beautiful people care a little less about having their picture taken?
I think not.
Still. There you are. We had sweet potato, peach and raspberry pancakes this morning. And bacon. With honey and maple syrup and fig preserves.
Could it get any sweeter?
Again, I think not.

Jessie and Vergil have taken off to the river to do a little kayaking and Greta is here, wondering where her humans have gone and sniffing about, wishing the little boys were here to play with her. Gibson is still sick. I think he may have this thing that's going around which is sort of cold/flu. Fever, headache. I feel so sorry for him. This is what he looked like last night. 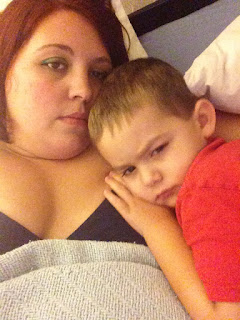 Lily says he's had a bath and some Advil this morning and feels a little better.
When that boy's sick, he wants his mama. Don't we all?

I'm having such a good time with Lis and Lon here. Last night we baked a chicken and Lis made the most spectacular beets with carrots you can imagine. She peeled the beets and chunked them into nice-size pieces and simmered them in some vegetable broth and then added peeled and cut-up carrots and cooked them for quite awhile until the broth was the color of rubies and a bit thickened and then she threw in a few raspberries and cooled them for a bit and added a bit of Old Dutch salad dressing. She usually uses a raspberry vinaigrette which I did not have but I couldn't imagine them tasting any better than these did. We ate those and the chicken and a baked potato and it was simply delicious, so beautiful.
Every time I woke up in the night I thought about those beets.
Beets are one of the only things that Mr. Moon really does not like to eat. Good thing he's out of town, eh? Because I'm going to be eating beets all week long.

So I really don't have much to talk about today. We're just moving along slowly, doing a little of this, a little of that. We had a bit of excitement last night in that Lon and I were talking on the back porch when all of a sudden, I heard Miss Lily the duck, just quacking her head off. I hadn't shut them up yet and I knew something was wrong. Lon and Lis and I all raced out with a flashlight and Lily was out of the hen house, just waddling and quacking and freaked out. We checked out the hen house and there were no critters in it but the hens and Mick were agitated so I feel sure something had been. We herded Lily back in and shut them up all safe and sound and they are all fine this morning.

I keep thinking about yesterday's shower. It was so perfect and May worked so hard to make it all happen. Lily and I helped a little with the food prep and Liz Sparks came in with her collection of full-on English tea regalia. Tea pots, cups, saucers. She set that all up and it was so lovely. She amazes me. She's your go-to woman if you need to do primitive camping via kayak and ALSO, the one who owns the formal English tea equipment.
It truly was the best baby shower I've ever attended. I'm not a woo-woo person so the blessing-way concept is a bit much for me but I also think that most baby showers are insulting to adult women but this shower had all the blessings and all the silliness and all the fun and all of the love without any of the bullshit. And there was something just so soul-pleasing about us all sitting around and using paint and paper and colored pencils and crayons and muslin to make sweet things for Jessie to take home. The alphabet pictures will be made into a book, the painted muslin into a prayer flag to hang when the baby comes with all good wishes on it. We laughed at our attempts to "make art" and encouraged each other and gossiped and shot the shit and ate cucumber sandwiches and cupcakes which were works of art in themselves. And drank tea. And then we watched Jessie open her presents and drank sparkling lemonade with elderflower flavoring. My ex's wife, my co-mama, came and brought Jessie's baby a beautiful little ukulele. Lis gave Jessie, along with some baby things, the first gift I ever gave to her which is a heart necklace. I've been wearing the twin to it in my most recent pictures. She asked my permission before she gave it to Jessie and I almost cried with the sweetness. She got books and clothes and her best friend from baby-childhood who is the niece of my darling Lynn whose birthday would have been yesterday, gave her a whole box full of things she'll need including a little kid tie-dye t-shirt that Lynn had made. So she was there too.

And now I'm sitting on the porch with Lon and Lis, who is playing the mandolin, and Maurice who is stretched out on the table, taking her ease, and Greta who is lying in front of the fan.

Ease and heat and summer time and music and here we are.